Washington, D.C. – The Human Rights Defense Center (HRDC) submitted a public comment to the Environmental Protection Agency today that provides input on the agency’s final draft of the EJ 2020 Action Agenda, highlighting the lack of consideration for environmental justice among the millions of prisoners in the United States. The comment was co-signed by 138 social justice, environmental and prisoners’ rights organizations from across the country.

Last year, HRDC submitted a 10-page comment signed by 93 organizations during the comment period for outlining the initial “framework” for EJ 2020, and later joined with the Sierra Club to generate over 12,000 emails of support for their position. Despite this advocacy, the EPA failed to include any mention of prisoners in the EJ 2020 final draft.

As a result, HRDC has further built on its efforts to make this a priority for the EPA by adding new heavy-hitting national organizations such as Greenpeace and the Natural Resources Defense Council, as well as prominent individuals including Sylvia Hood Washington, editor-in-chief of the Environmental Justice Journal, and Dr. Robert Bullard, considered to be the “Father of Environmental Justice.”

HRDC’s updated comment elaborates on problems nationwide which illustrate a clear need to protect prisoners as a population that faces extreme environmental justice impacts. For example, prisons and jails built on or near landfills, toxic waste dumps, Superfund cleanup sites and coal mining sites, or that are vulnerable to natural disasters such as flooding and environmental hazards like contaminated water.

Additions made in the updated comment include references to the recent Flint water crisis, a federal judge’s ruling condemning arsenic in Texas prison water, and impacts of Valley Fever on Hawaiian prisoners in Arizona, indicating that this is an ongoing issue.

The updated comment filed with the EPA can be found online here.

“It’s encouraging to see the EPA attempting to increase the effectiveness of protecting vulnerable communities that have been overburdened by industrial pollution, but a significant component is missing when impacts on millions of prisoners and their families are ignored,” said Panagioti Tsolkas, coordinator of HRDC’s Prison Ecology Project.

According to the comment submitted by HRDC, there is overwhelming evidence that the population of people in prison represents one of the most vulnerable and uniquely-overburdened demographics in our nation. The comment notes that prison populations are almost entirely low-income and that black, Hispanic/Latino and Native Americans are consistently overrepresented in all 50 states.

Environmental permits that fail to meet the environmental justice standards set in place 20 years ago under Executive Order 12898 may violate the Civil Rights Act of 1964. Title VI of the Act explicitly prohibits discrimination by government agencies that receive federal funds; if an agency is found in violation of Title VI, it may lose its federal funding. The prison sector should not be an exception.

“Those unfamiliar with the conditions in America’s prisons may balk at our allegations but the EPA cannot claim to be among the uninformed,” Tsolkas stated.

On February 5, 2015, Tsolkas conducted an interview with an EPA representative from Region III who explicitly stated that environmental justice guidelines have not been applied to prisoners for the purpose of reviews under the National Environmental Policy Act, because the EPA uses data that fails to take prisoner populations into account.

EPA Region III, which encompasses the Mid-Atlantic, conducted an initiative in which numerous prison inspections by the agency resulted in enforcement actions between 1999 and 2011, ranging from issues involving the disposal of hazardous waste to violations of air and water standards, primarily due to prison overcrowding. The U.S. Department of Justice’s Office of the Inspector General has also cited various violations of health, safety and environmental laws, regulations and Bureau of Prisons policies related to industrial operations within federal prisons.

Yet the EPA has never cited the health and safety of prisoners exposed to such environmental conditions as a factor in prison inspections or in the permitting of new facilities. It has also failed to note the blatant discrimination that is inherent in toxic prison conditions, despite the fact that Title VI provides a mandate for addressing such discrimination which other agencies have recognized.

As Dr. Robert Bullard, a signatory to HRDC’s comment, stated in a recent listening session directed at the EPA, “It is incredible that in 45 years, EPA never met a case of environmental discrimination—not even in the southern region of the country ... in a region that was notorious for practicing discrimination under ’Jim Crow’ segregation[.]”

HRDC executive director Paul Wright observed, “Ironically, prisoners are frequently counted for the purpose of gerrymandering voting districts. So why are we missing the mark in terms of environmental protections for those forced to live inside toxic prisons, such as facilities built on coal mining sites or waste dumps?”

A map showing various examples of prison-related environmental issues, created through collaboration between the Prison Ecology Project and Humboldt State University, can be found online here. 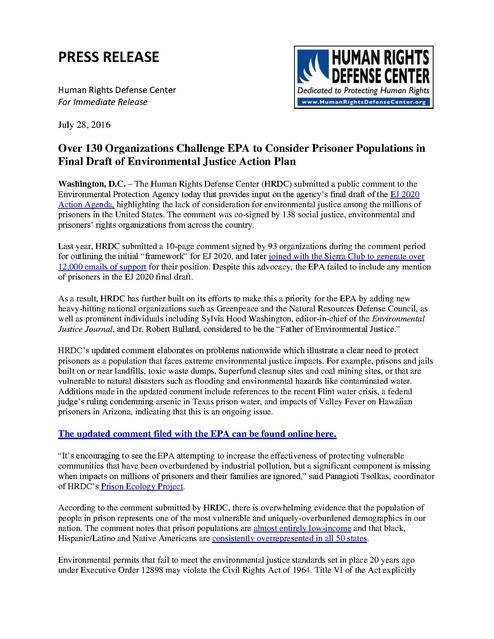