Department of Justice Announces Plan to Phase Out For-profit Prisons

Nashville, TN – Yesterday, the Deputy Attorney General of the U.S. Department of Justice (DOJ) announced, via a memo to the acting director of the Federal Bureau of Prisons, that the DOJ plans to phase out contracts with private, for-profit prisons that house federal prisoners.

The memo cited a scathing report by the DOJ’s Office of the Inspector General, released earlier this month, which found higher rates of assaults, disciplinary convictions, lockdowns, use of force and contraband at private prisons that hold federal prisoners. Improperly placing prisoners in segregation units was also cited as a problem at the facilities, run by CCA, GEO Group and MTC.

“Private prisons served an important role during a difficult period, but time has shown that they compare poorly to our own Bureau facilities,” the memo stated. “They simply do not provide the same level of correctional services, programs, and resources; they do not save substantially on costs; and as noted in a recent report by the Department’s Office of lnspector General, they do not maintain the same level of safety and security.”

The findings by the OIG were, in fact, nothing new – there have been reports of problems with private prisons, including higher levels of violence, security deficiencies, higher recidivism rates for prisoners released from privately-operated facilities, etc. for decades.

Additionally, since late 2008 there have been four major riots at private prisons housing federal prisoners, including two riots at the GEO Group-run Reeves County Detention Complex in Texas in December 2008 and January 2009; an uprising that resulted in the death of a guard at CCA’s Adams County Corr. Center in Mississippi in May 2012; and a February 2015 riot at MTC’s Willacy County Corr. Center in Texas that led to the prison’s closure. Comparably, there were no major riots at public federal prisons over the same time period.

“The private prison industry has a long and sordid track record of abuses and poor performance, which has been documented in numerous after-action reports following riots, escapes and deaths at for-profit facilities,” noted Alex Friedmann, associate director of the Human Rights Defense Center and a former prisoner who served six of his 10 years behind bars at a CCA-managed prison prior to his release in 1999. He is a national expert on the private prison industry.

“Advocates have been arguing for years that research shows private prisons have higher levels of violence, partly due to their business model of understaffing and cutting corners to generate profit, which results in high staff turnover rates, inexperienced staff and institutional instability,” said Friedmann. “Thus it’s encouraging that someone has finally paid attention.”

Both CCA and GEO Group, which trade on the New York Stock Exchange, suffered major declines in their stock prices following the DOJ’s announcement – 35% and 39% respectively – and their stock has rebounded only slightly today. MTC is a privately-held company.

CCA took issue with the findings of the OIG report, claiming that the population at privately-operated facilities housing federal prisoners was more likely to engage in violence. The prisons that were investigated by the OIG were “CAR” (Criminal Alien Requirement) prisons, which house immigrants facing deportation after they complete their federal prison terms. CCA also claimed that prisoners at CAR facilities, which are all privately operated, were more likely to be involved in gangs.

Yet this ignores the fact that CAR prisons are low-security; in fact, the CAR facilities operated by CCA – Adams County, McRae, Eden and Cibola – are listed as “low” or “minimum” security on the company’s website. Many, if not most, prisoners housed in those facilities are incarcerated for either illegal entry into the United States or illegal reentry – which are not violent crimes. And, of course, there are also violent prisoners and gangs in public federal prisons, which did not have the problems documented in the OIG report. Nor does CCA’s rationale explain the much higher amount of contraband found in for-profit prisons – nearly twice as many weapons and over eight times as many contraband cell phones.

The Bureau of Prisons has already started to scale back its use of private facilities; it declined to renew its contract with CCA at the Northeast Ohio Correctional Center in late 2014, and recently announced its decision to end a contract with CCA to house prisoners at the company’s Cibola County Correctional Center in New Mexico. Today, GEO Group announced that the Bureau of Prisons had rescinded a contract extension previously granted at the company’s D. Ray James Correctional Facility in Georgia.

“The fact remains that for-profit prisons are part of the problem, not part of the solution to mass incarceration in the United States,” said HRDC executive director Paul Wright. “Imprisoning people so corporations can generate profit, with the collusion of government officials, is just one of the many failings of our nation’s criminal justice system. Private prisons are accountable to their executives and shareholders, not to members of the public.” 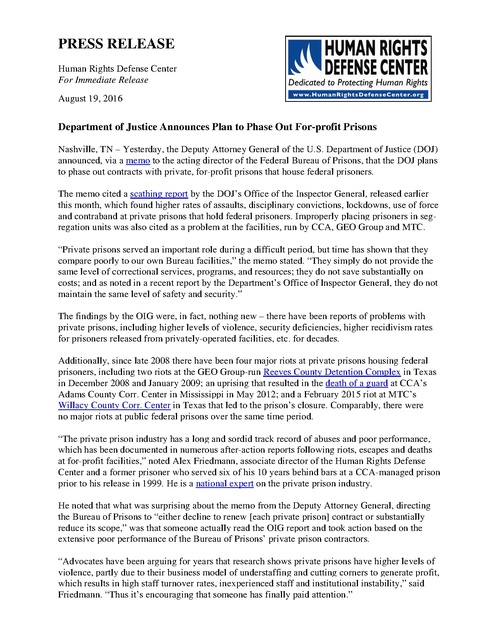