Nashville, TN – Last week, CoreCivic, formerly known as Corrections Corporation of America (CCA), the nation’s largest for-profit prison company, announced via a press release that it was launching an initiative to advocate for policies designed to reduce recidivism.

Additionally, the company said it would “make support for reentry policies one of the criteria considered by its political giving committee when determining financial support for candidates for office.” CoreCivic self-reported making $781,800 in political donations in 2015; it has not yet released data for its 2016 campaign contributions.

CoreCivic CEO Damon Hininger lauded the initiative, which stemmed from commitments made by the company in 2014 to encourage rehabilitation and reduce recidivism.

However, Alex Friedmann, associate director of the Human Rights Defense Center, who served six years at a CCA-operated prison prior to his release in 1999, criticized the announcement as a public relations ploy.

Friedmann, who owns a small amount of stock in CoreCivic as an activist investor, submitted a shareholder resolution in 2014 that would have required the company to spend just 5% of its net profits on rehabilitative and reentry programs beyond what it is required to spend pursuant to its contracts with government agencies.

According to the text of the resolution, it provided “an opportunity for CCA to do more to reduce the recidivism rates of offenders released from the Company’s facilities, and thus reduce crime and victimization in our communities.”

CoreCivic’s board rejected his resolution, the company filed an objection with the Securities and Exchange Commission, and the resolution was excluded from proxy materials sent to company shareholders. In its objection, CoreCivic had argued that the resolution related to “ordinary business operations,” comparing it to other resolutions that have, for example, sought to require companies to “test and install showerheads that use limited amounts of water.”

With respect to the company’s latest announcement, Friedmann noted: “If CoreCivic was serious about reducing recidivism, it would not have objected to the resolution I filed that would have required them to do exactly that. This is simply a further attempt at rebranding – such as when CCA recently changed its name to CoreCivic after its brand became synonymous with the rape, murder, neglect and abuse of prisoners in their care, as well as riots and escapes. This is a public relations effort to portray CoreCivic as a more ‘friendly’ company which is purportedly concerned about reducing recidivism while receiving over $1.8 billion in annual revenue from its for-profit prison, jail and immigration detention contracts.”

“The bottom line,” he added, “is that CoreCivic is in the business of incarcerating people for the purpose of generating corporate profit.” Rather than screen donations to political candidates who favor recidivism-reducing policies, Friedmann stated, “CoreCivic could invest directly in rehabilitative and reentry programs and services. I don’t see where CoreCivic has said it is going to devote financial resources to reducing recidivism; rather, the company only indicated   it ‘will apply government relations resources and expertise,’ whatever that means.”

With respect to the advocacy areas cited by CoreCivic, Friedmann also observed there is little research indicating that “ban the box” policies are actually effective in helping former prisoners obtain jobs, while some studies have found that such policies may in fact make it harder for black and Hispanic job applicants to find employment.

Further, social impact bonds (SIBs) have been tried before in the criminal justice context and failed spectacularly in a trial program at the Rikers Island jail complex, resulting in a $1.2 million loss for Goldman Sachs, which had invested in the project, and a loss of $6 million in grant funding from Bloomberg Philanthropies.

“It’s not unexpected that CoreCivic supports social impact bonds, since they are an attempt to generate profit for investors, which is CoreCivic’s core business model,” Friedmann said, adding that he was calling on the company to directly invest in rehabilitative and reentry programs for prisoners rather than in lobbying, political contributions and profit-generating ventures.

The Human Rights Defense Center, founded in 1990 and based in Lake Worth, Florida, is a 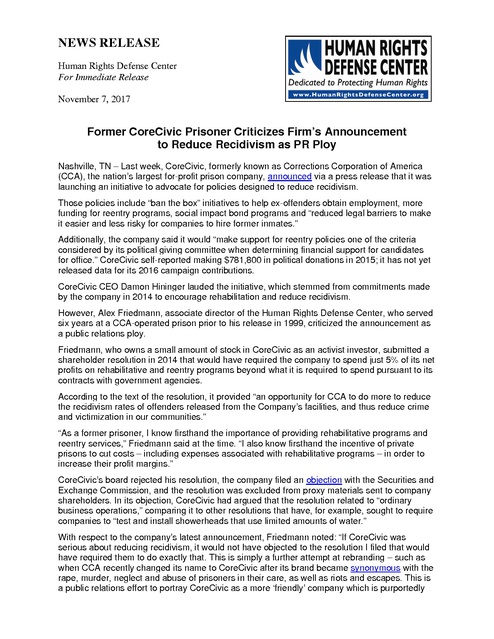