“This latest rewrite of the immigration ban by the Trump administration is nothing more than a scheme to benefit the private prison industry wrapped in the false cloak of national security. The administration’s vilification of immigrants, fueling the recent alarming increase in deportation arrests, is a means to ensure increased profits for the private, for-profit prisons used to house them.

“More than six out of every ten immigration detention beds are not in public facilities operated by the government, but in private, for-profit prisons. These facilities operate outside public scrutiny with no transparency and even less accountability, and have a long history of abuses and in-custody deaths. Last August, a U.S. Department of Justice report cited higher average rates of contraband cell phones, tobacco and weapons; higher rates of prisoner-on-prisoner assaults, prisoner-on-staff assaults and uses of force; and more lockdowns at privately-operated facilities that house non-citizen federal prisoners.

“As a result of that scathing report by the DOJ’s Office of the Inspector General, the Obama administration decided to phase out private prisons on the federal level, stating, ‘They simply do not provide the same level of correctional services, programs, and resources; they do not save substantially on costs; and ... they do not maintain the same level of safety and security.’

“However, as part of President Trump’s new crackdown on immigrants, Attorney General Jeff Sessions recently reversed the Obama administration’s decision to phase out private contractors to operate federal prisons. It is no coincidence that Sessions supports the private prison industry; for-profit prison companies, including Boca Raton, Florida-based GEO Group and Nashville, Tennessee-based Corrections Corporation of America (CCA, now known as CoreCivic), are driven by profit rather than public safety or providing humane conditions of confinement. Such companies cut costs by cutting corners in order to boost their profit margins, resulting in sub-standard, often life-threatening conditions in their facilities. Nearly half of both GEO Group’s and CCA’s revenues come from contracts with the federal government.

“It also worth noting that CCA and GEO Group each donated $250,000 to President Trump’s inauguration, and a GEO subsidiary contributed $225,000 to a pro-Trump PAC during the 2016 elections. Further, GEO Group has retained two Washington, DC lobbyists, David Stewart and Ryan Robichaux, who previously worked as aides to Jeff Sessions when he served in Congress. This smacks of political payoff and special-interest cronyism at its worst.

“The Human Rights Defense Center remains fiercely committed to opposing the mistreatment of prisoners held in privately-operated facilities regardless of their ethnicity, national origin or immigration status. Should the Trump administration’s latest targeting of  immigrants and their families lead to a government-created demand for more detention beds, federal officials should focus on improving the existing public system before lining the pockets of wealthy private prison executives. Better yet, rather than increasing enforcement efforts against immigrants, including through the latest immigration ban, the Trump administration should focus on comprehensive immigration policy reforms.

“In short, our nation’s immigration detention system should not be locking people up for the purpose of generating corporate profit for politically-connected prison firms.” 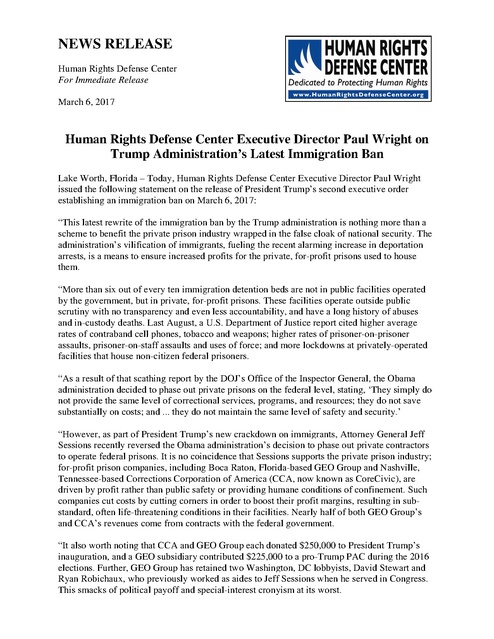