Prison Literacy, Banned Books, and the Right to Read

According to the Bureau of Justice Statistics, the United States prison population is estimated at nearly 1.5 million as of 2017. Furthermore, the Literacy Project Foundation has found that three out of five prisoners are illiterate. With these alarming figures in mind, we believe that raising awareness and support for incarcerated people in the US is of pressing importance.

The regulation and banning of books are common in many institutions across the United States, but are the most restrictive in prisons. Within the last year, new regulations in Washington state banning nonprofits from donating books to prisoners were quietly approved. As information professionals, we can play a unique role in ensuring that incarcerated individuals have equal access to literary materials. One way that we can fulfill this role is by supporting human rights organizations like The Human Rights Defense Center (HRDC) in spreading awareness about these restrictive policies, and the importance of setting clear criteria and explanations for their creation.

HRDC is a 501(c)(3) non-profit organization dedicated to equal rights for incarcerated individuals across the country in prisons, jails, and immigrant and juvenile detention facilities. The organization was started by a group of volunteers in 1990 as a way to publish a monthly newsletter, now titled Prison Legal News, to provide a voice for both prisoners and their families.

In spring 2019, we began work on a collaborative project with the HRDC that aims to find and request information from the Department of Corrections (DOCs) in each state regarding which books are banned by their prison systems, as well as information about their review committees and processes, if applicable. We are in the process of creating a publicly accessible list of contacts for the departments, and are requesting policies that are responsible for regulating access to books in each states’ prison system.

Due to both our time constraints and monetary constraints of the HRDC, the scope of this project has thus far been limited to state adult corrections facilities.

Information on how these facilities are restricting prisoners’ access to print materials is considered a priority for two major reasons. Firstly, state DOCs are putting out the types of directives like the one in Washington state that galvanized this project into being. Secondly, state DOCs are more likely to have publicly requestable material and policies for their adult corrections facilities, for which the states can be held accountable. If a state facility with a list of rejected print publications and a policy on how to vet them is found to be violating its own procedures, an organization like the HRDC can hold that state accountable through its own documentation.

Book regulation lists are updated yearly, and thus need to be requested on an annual schedule to avoid being out of date. So far, we have received banned book lists from eight states: Illinois, Iowa, Kansas, Michigan, Montana, New Hampshire, Utah, and Vermont. We have also found or received policy documentation about restriction information on banned materials or outdated banned book lists from Connecticut, Idaho, Louisiana, Maine, Massachusetts, Michigan, Nevada, Rhode Island, and Vermont.

We have already received national attention from online news sources. Among them, Newsweek wrote an article that highlighted the work we are doing and challenged readers to think critically about the types of books that are being banned. We are heartened by these responses, and we hope that the increased visibility for the work we are doing will encourage more information professionals to collaborate on similar prison literacy projects in need of further attention, such as obtaining banned books lists for state juvenile facilities and immigration detention centers. We also hope that our work will lead to greater transparency and information regarding governmental criteria for banning specific reading materials for prisoners. 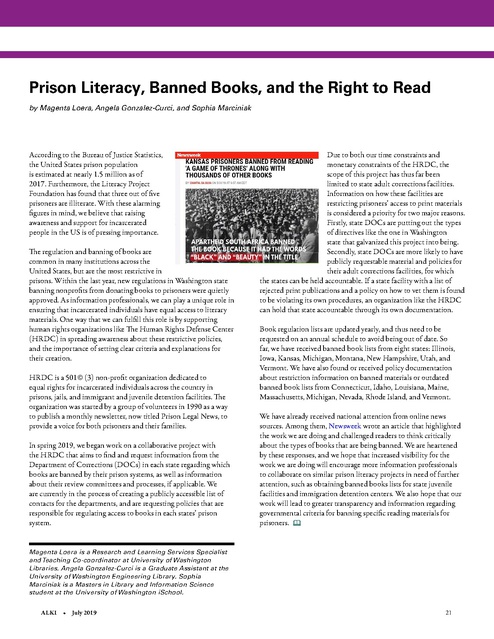