Nashville, TN – On July 10, the Human Rights Defense Center and No Exceptions Prison Collective reported that from March 2014 through June 2019, there have been twice as many murders in the four Tennessee prisons operated by CoreCivic (formerly Corrections Corporation of America) than in the ten facilities run by the Tennessee Department of Correction (TDOC), and that CoreCivic prisons have a homicide rate four times higher than TDOC prisons.

For example, the company argues that “a true apples-to-apples comparison would compare facilities by charge data. For example, a facility that holds a higher concentration of inmates convicted of murder or other violent crimes – as is the case with CoreCivic’s Tennessee facilities – would be expected to have a higher homicide rate than those housing non-violent offenders.”

In the TDOC’s statistical abstract report for FY 2018, on page 25, the department breaks down the prison population by primary offense and facility location. That chart indicates the four CoreCivic prisons held approximately 1,132 prisoners convicted of murder, while TDOC facilities held 2,887 – more than twice as many. Further, the data for prisoners convicted of all “person” offenses (defined by the TDOC as homicide, kidnapping, sex offenses and assault) indicates that CoreCivic prisons housed approximately 3,588 prisoners convicted of such offenses, while TDOC facilities held 6,448 – almost twice (1.8 times) as many.

According to CoreCivic’s “apples to apples” comparison, based on prisoners convicted of homicide and other violent crimes, its facilities should have half the murders as TDOC prisons, but in fact the number of homicides is double at CoreCivic facilities.

The company next argues that “nearly the entirety of the population that CoreCivic holds is medium-security custody and above (i.e., populations with a higher propensity toward violent incidents).”

Yet according to the chart on page 20 of the TDOC’s statistical abstract report for FY 2018, a total of 17,356 state prisoners were classified as medium security. CoreCivic housed an average daily popula-tion of 7,655 prisoners during FY 2018 (chart on page 21 of the TDOC’s report); therefore, the TDOC housed more (9,701) medium-security prisoners than CoreCivic. Similar comparisons can be made in earlier years, based on data reported by the TDOC in its prior annual statistical reports.

CoreCivic falsely states that while its prisons mainly hold medium-security prisoners, “a substantial portion of TDOC’s sites hold minimum-security, non-violent offenders.” In fact, based on the chart on page 20 of the TDOC’s FY 2018 report, a total of 2,999 prisoners at all facilities (both TDOC and CoreCivic) were classified as minimum security. Even if every one of those prisoners was held at a TDOC facility, minimum-security prisoners would comprise just 20% of the population in state-run prisons – certainly not a “substantial portion” as claimed by CoreCivic.

When asked to comment on CoreCivic’s incorrect statement that its prisons house more dangerous prisoners than TDOC facilities, TDOC Communications Director Neysa Taylor did not address the fact that more medium-security prisoners are held in state-run prisons, and said the TDOC “stands by” its previously issued statement and has “nothing more to add on that issue.”

In its media statement, CoreCivic also complains that “it’s statistically questionable to rely on a rate-per-10,000 calculation for a population that’s smaller than 10,000 people. CoreCivic doesn’t even hold 10,000 inmates for TDOC.”

Apparently unfamiliar with basic math, the company doesn’t realize that rates per population are used for comparison purposes and different rates, such as deaths per 1,000 prisoners, can be obtained by simply moving the decimal point. The U.S. Department of Justice’s Bureau of Justice Statistics, for example, uses rates per 100,000 prisoners in its Mortality in State Prisons report, even though almost all (47 of 50) states have far less than 100,000 prisoners.

In this case, the homicide rate at CoreCivic’s four prisons in Tennessee from March 2014 through June 2019 was 3.13 per 10,000 prisoners, compared with .67 per 10,000 prisoners in TDOC facilities – or 4.64 times higher. The murder rate in CoreCivic prisons per 1,000 prisoners was .313, compared with a rate of .067 in TDOC prisons – again, 4.64 times higher. Changing the factor used to calculate population rates does not change the difference between the rates. This is basic math that CoreCivic – which receives $160 million from the State of Tennessee – evidently does not grasp.

However, the TDOC only houses around 2,000 female prisoners, or about 10% of the state’s total prison population. Even removing those 2,000 female prisoners from the prison homicide data, there were still 10 murders at CoreCivic prisons, and the homicide rate at the company’s prisons is still more than four times higher than at TDOC facilities that only house male prisoners (3.13 per 10,000 prisoners at CoreCivic prisons versus .778 at TDOC-run prisons – or 4.02 times higher). *

“It is not until the very last paragraph in CoreCivic’s media statement that the company says, ‘The bottom line is that even one death in our facilities is too many, and we’re always working to improve.’ But if one death is too many, then what about the 10 murders and nine suicides at CoreCivic prisons in Tennessee alone over the past five years, among other deaths?” stated Alex Friedmann, associate director of the Human Rights Defense Center.

“The real ‘bottom line’ is this: CoreCivic does a very poor job of managing its facilities and ensuring prisoners’ safety. The company cares only about its own bottom line – how much money it makes,” he added. “When presented with a factual report that twice as many prisoners have been murdered in its prisons in Tennessee, which have a homicide rate four times higher than state-run prisons, CoreCivic attacked the messenger and issued easily-disprovable lies. If the company makes such falsehoods so freely, just imagine what it tells its government partners, investigators and investors.

“CoreCivic does not dispute that the murders in its prisons occurred, and its response is a callous insult to the family members of the prisoners who were killed in its facilities due to the company’s failure to protect them from harm – that is, its most basic responsibility,” Friedmann concluded.

* This paragraph includes corrected data; originally we incorrectly reported that the TDOC houses around 1,000 female prisoners.

The Human Rights Defense Center, founded in 1990 and based in Lake Worth, Florida, is a non-profit organization dedicated to protecting human rights in U.S. detention facilities. In addition to advocating on behalf of prisoners and publishing books and magazines concerning the criminal justice system, HRDC engages in state and federal court litigation on prisoners’ rights issues, including wrongful deaths, public records, class actions and Section 1983 civil rights cases.

The No Exceptions Prison Collective, founded in 2014, is a grassroots initiative in Nashville, Tennessee dedicated to transforming the social segregation of prison by advocating that no exceptions be made to the abolition of slavery. It was founded and is led by individuals directly impacted by carceral slavery – both insiders (prisoners) and people on the outside. 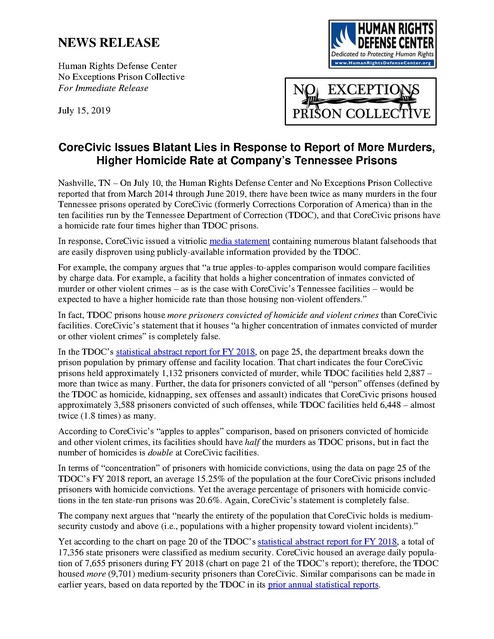