HRDC, No Exceptions release data on homicides at CoreCivic prisons in Tennessee

Twice as Many Homicides in CoreCivic Prisons in TN; Murder Rate in Private Prisons Four Times Higher than Public Prisons

Nashville, TN – Today, the Human Rights Defense Center and No Exceptions Prison Collective reported that from 2014 through June 2019, there have been twice as many homicides in the four Tennessee prisons operated by CoreCivic (formerly Corrections Corporation of America) than in prisons run by the Tennessee Department of Correction (TDOC). The homicide rate in CoreCivic facilities is over four times higher than the rate for TDOC prisons, based on population counts. This is despite the fact that during that period, TDOC facilities held, on average, 70% of the state’s prisoners – including those with higher security levels than in CoreCivic prisons.

Five state prisoners were killed in TDOC-run facilities during the same time period, based on data from the Department’s fiscal year statistical abstract reports and more recent information provided by the TDOC’s communications office.

For example, Jeffrey Sills, 43, was reportedly beaten and stabbed to death by his cellmate, Travis Bess, at SCCF in March 2014. Witnesses indicated that Bess had publicly said he would kill Sills if they were housed together, yet that statement was allegedly ignored by CoreCivic guards.

Earl Wayne Johnson, 68, was beaten by another prisoner at HCCF; according to a request for medical care the day after he was attacked, Johnson said he was assaulted because he refused to give his coffee to the other prisoner. The medical examiner found his death was caused by a “subdural hematoma due to blunt force injuries of the head.” Johnson’s widow, represented by attorney Ty Clevenger, has filed a wrongful death suit against CoreCivic, claiming the company understaffs its facilities in order to reduce costs and “routinely” fails to provide adequate medical care.

Fidencio Perez, 51, was assaulted and killed by his cellmate, Billy McIllwain, at SCCF on April 27, 2018. McIllwain was later indicted and charged with second-degree murder.

Prisoner Walter E. Kendrick has been charged with first-degree murder for killing Tyrone Elliott Montgomery, 52, at SCCF in January 2019.

On May 3, 2019, Dameion Nolan was attacked in his cell by a group of prisoners at WCF; according to other prisoners who contacted his family, Nolan, who was not affiliated with a gang, was stabbed to death by multiple gang members after a CoreCivic guard let them into his locked cell. His family has started a change.org petition to close the Whiteville facility.

The Tennessee Bureau of Investigation is investigating the June 15, 2019 death of Ernest Edward Hill, 42, at TTCF; a CoreCivic spokesperson said the facility was placed on “partial lockdown status following an inmate-on-inmate altercation that resulted in one inmate losing his life.”

“It is unconscionable that CoreCivic houses far fewer prisoners than in TDOC facilities, with lower security levels, yet has had twice as many homicides over the past five years,” said HRDC associate director Alex Friedmann, who served six years at a CoreCivic facility prior to his release in 1999,

and is now an expert on the private prison industry. “CoreCivic – and the Tennessee Department of Correction, which monitors the state’s private prison contracts – need to explain the disproportionate number and rate of murders in CoreCivic-operated prisons, and whether those deaths are attributable to the company’s profit-based business model.”

“CoreCivic’s profit model is built around understaffing and constant lockdowns of poorly run, exceedingly dangerous prisons. For years, prisoners and their loved ones have begged for government officials to intervene and put an end to CoreCivic’s cultivated environment of abuse, neglect and death. The only acceptable solution to the human rights disaster that CoreCivic has been allowed to create is to shut this corporation down. No one should profit from torture,” added Jeannie Alexander, an attorney, former TDOC chaplain and director of the non-profit No Exceptions Prison Collective.

The Human Rights Defense Center tracks deaths at CoreCivic facilities; in addition to the 10 murders at the company’s prisons in Tennessee from 2014 through June 2019, there were at least nine suicides. Nationwide, over 600 prisoners have died at CoreCivic-operated facilities since 1992.

* Prison population data for FY 2019 has not yet been released by the TDOC, thus was not used.

The Human Rights Defense Center, founded in 1990 and based in Lake Worth, Florida, is a non-profit organization dedicated to protecting human rights in U.S. detention facilities. In addition to advocating on behalf of prisoners and publishing books and magazines concerning the criminal justice system, HRDC engages in state and federal court litigation on prisoners’ rights issues, including wrongful deaths, public records, class actions and Section 1983 civil rights cases.

The No Exceptions Prison Collective, founded in 2014, is a grassroots initiative in Nashville, Tennessee dedicated to transforming the social segregation of prison by advocating that no exceptions be made to the abolition of slavery. It was founded and is led by individuals directly impacted by carceral slavery – both insiders (prisoners) and people on the outside. 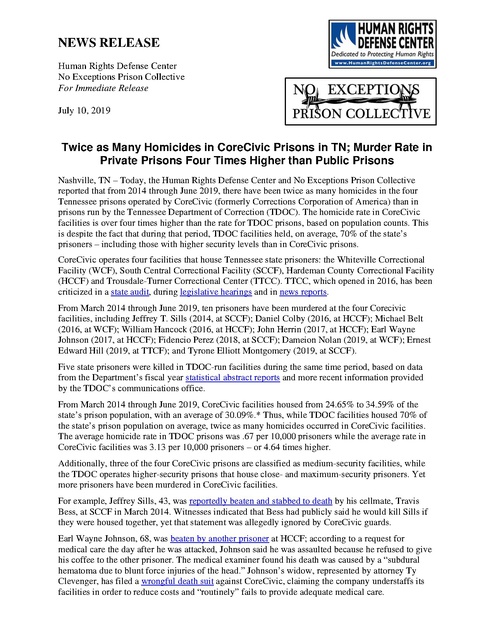