Washington, DC – The prison telecom industry, which provides phone services for prisons, jails and other detention centers, has a long and sordid history of exploiting prisoners and their families by charging exorbitant rates and fees. Over the past decade the industry has steadily consolidated, with two companies supplying the majority of prison phone services: Securus Technologies and Global Tel*Link (GTL).

Yesterday, the Federal Communications Commission (FCC) announced that a proposed merger between Securus and the nation’s third-largest prison telecom, Inmate Calling Solutions, LLC (also known as ICSolutions), which would have resulted in further consolidation and thus even less competition, had been withdrawn by the firms.

FCC staff had recommended to the agency’s chairman, Ajit Pai, that the merger be denied. Pai wrote in a terse statement that the FCC staff had “concluded that this deal poses significant competitive concerns and would not be in the public interest.”

The non-profit Human Rights Defense Center (HRDC), which co-founded the Campaign for Prison Phone Justice to advocate for reforms in the prison telecom industry, including lower phone rates, the elimination of ancillary fees and an end to “commission” kickback-based contracts with corrections agencies, had previously filed a comment with the FCC opposing the Securus merger.

In its July 13, 2018 comment, HRDC noted the proposed merger “would further increase the duopoly nature of the [inmate calling services] industry and thus result in even less competition within that market.” HRDC also called on Chairman Pai to recuse himself from all actions and decisions involving both Securus and the prison telecom industry, in part because prior to his appointment to the FCC he had represented Securus when he worked for the law firm of Jenner & Block. He also had dissented on all votes taken by the FCC during the Obama administration with respect to reforms and rate caps involving prison phone services.

“It is excellent news that Securus has withdrawn its bid to merge with [ICSolutions] and prevent further consolidation of the prison telecom industry, but more needs to be done when just two companies, Securus and Global Tel*Link, control around 80% of the detention facility telephone lines,” said HRDC executive director Paul Wright. “The total absence of a competitive market where the consumers who pay the bills have a voice and are heard is also not addressed by this.”

In July 2018, a coalition of organizations, including HRDC, had asked the FCC to deny the Securus merger in a petition filed by pro bono attorneys Davina Sashkin and Cheng-yi Liu with the Arlington, Virginia law firm of Fletcher, Heald & Hildreth, PLC.

According to Reuters news service, FCC Commissioner Jessica Rosenworcel stated in an April 2 email that “now that two of the largest prison payphone companies have called off their merger, it is time for the FCC to once and for all fix the sky-high rates inmates and their families pay for phone calls.”

The Human Rights Defense Center, founded in 1990 and based in Lake Worth, Florida, is a non-profit organization dedicated to protecting human rights in U.S. detention facilities. In addition to advocating on behalf prisoners and publishing books and magazines concerning the criminal justice system, HRDC engages in state and federal court litigation on prisoner rights issues, including wrongful death, public records, class actions and Section 1983 civil rights cases.In 2011, HRDC co-founded the national Campaign for Prison Phone Justice, to advocate for fair and just phone rates for prisoners and their families. 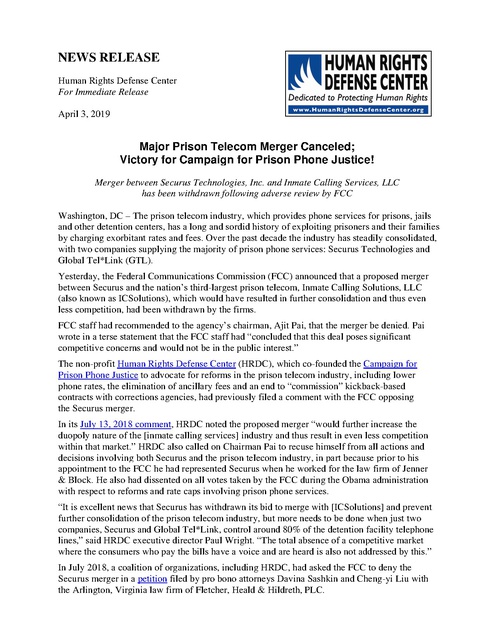