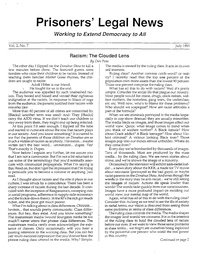 The other day I flipped on the Donahue Show to kill a few minutes before chow. The featured guests were families who raise their children to be racists. Instead of teaching them familiar Mother Goose rhymes, the children are taught to recite:

Loaded on July 15, 1991 published in Prison Legal News July, 1991, page 2
Filed under: Conditions of Confinement, Overcrowding. Location: Washington.
On June 12, 1991, Clallam Bay Corrections Center (CBCC) superintendent Neal Brown announced that the 21 million dollar expansion of CBCC was on schedule (but there is no money for teachers and schools in Washington). The expansion plans include renovation of food service and dining facilities, expansion of the sewage ...
Read more...

June 10, 1991 the Legislature went back into session and by the time this is read the session should be over. This is a time when there is a lot of speculation and rumors going around. One rumor is that Senator Gary Locke is against the continuation ...
Read more...

Last issue we published an article titled "Which Shell Is The Pea Under?" in which we argued against the U.S. government's claim that there exists a "definite and positive" link between locking people up and violent crime rates in the United States. As more ...
Read more...

By now most people have seen the gruesome home video of Rodney King being beaten senseless by Los Angeles police. The only thing unusual about this episode is that it was captured on film, not that it happened to begin with.

Prisoners Allowed to See Evidence Against Them

A federal prisoner in Pennsylvania was infracted and charged with making threats of bodily harm to another prisoner and refusing a cell assignment. The threats were supposedly made in a letter Young, the prisoner, gave to a guard while refusing to cell in ...
Read more...

Loaded on July 15, 1991 published in Prison Legal News July, 1991, page 4
Filed under: Commentary/Reviews. Location: Washington.
Recently a PLN reader reported that a park for employees of the Washington State penitentiary (WSP) was being built only for employees. The park opened on March 18, 1991, as an "employee park" as a 4-acre area adjacent to the highway and east of the penitentiary, it is surrounded by ...
Read more...

Benton Burt was a pretrial detainee in San Francisco who filed suit under 42 USC, §1983 in federal court claiming he was confined under illegal and unconstitutional conditions. At a bench trial Burt won his case and $500.00 in damages. He represented himself ...
Read more...

Prisoners and the Grievance System

The Washington Department of Corrections (DOC) and many others have grievance systems to resolve complaints within the prison system rather than going to court to settle them.

Many prisoners are skeptical of the grievance system as it rarely resolves their complaints, especially ...
Read more...

Human nature and society were not transformed when the SRA was implemented in 1984. The transformation was meant to occur in the basic philosophy of this state's justice system. The old system did not work. Some offenders were paroled too soon, others were imprisoned ...
Read more...

First of all, I would like to share the situation and some of the thoughts of a former Palestinian prisoner, a man who was only recently released after having served l7 years in Israeli prisons. His name is Ali Mohammed Jiddah, and he was born ...
Read more...

I think [the letter from] "name withheld, TRCC" had a good point about stigmatizing sex offenders. I find it painfully ironic that the people in our society most victimized by stigmatization (i.e. prisoners) sometimes do the same thing to other inmates. If you include date rape, I wonder ...
Read more...

No Warrantless Search of Departing Visitor

Prison officials strip-searched a prisoner's sister at the conclusion of a visit because of a suspicion that she was smuggling marijuana to him. Nothing was found. She brought suit under 42 U.S.C. section 1983. The defendant prison officials sought qualified immunity from damages, arguing ...
Read more...

Loaded on July 15, 1991 by H D published in Prison Legal News July, 1991, page 9
Filed under: Sentencing, Parole. Location: Washington.
I would like to make some observations about the article titled ".100 hearings; Opinions of an Attorney" by Barbetta Ralphs, Attorney. I believe I am qualified [to discuss her article] because I have served a total of over eleven years on parole. It is very significant that Ms. Ralphs would ...
Read more...

Loaded on July 15, 1991 by Patricia Novotny published in Prison Legal News July, 1991, page 9
Filed under: Sex Offenders (Discrimination), Crime/Demographics, Victims, Civil Commitment. Location: Washington.
(Reprint of letter to the Seattle Times) Thomas Shapley in his column on sexual predators (Focus, April 7) does a disservice to the sexually abused and sexually assaulted. He reminds me of the man in the Mae West movie. When he offers to protect her, Mae West asks: "Who are ...
Read more...

Loaded on July 15, 1991 published in Prison Legal News July, 1991, page 10
Filed under: Conditions of Confinement, Toilets, Plumbing, Sewage, Water. Location: Illinois.
A prisoner filed a civil rights lawsuit alleging that the conditions in the housing unit in which he was confined violated his eighth and fourteenth amendment rights. The trial court refused to dismiss the claim that living conditions in the housing unit were a health hazard because water came out ...
Read more...