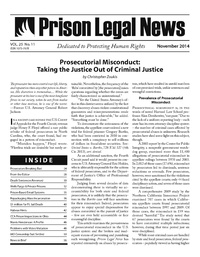 Prosecutorial Misconduct: Taking the Justice Out of Criminal Justice

Prosecutorial Misconduct: Taking the Justice Out of Criminal Justice

The prosecutor has more control over life, liberty, and reputation than any other person in America. His discretion is tremendous.... While the prosecutor at his best is one of the most beneficent forces in our society, when he acts from malice or other base motives, he is one of the worst.
—Former U.S. Attorney General Robert Jackson

In a recent case before the U.S. Court of Appeals for the Fourth Circuit, veteran judge Henry F. Floyd offered a rare public rebuke of federal prosecutors in North Carolina, who, the court found, had engaged in a pattern of misconduct.

“Mistakes happen,” Floyd wrote. “Flawless trials are desirable but rarely attainable. Nevertheless, the frequency of the ‘flubs’ committed by [the prosecutors] raises questions regarding whether the errors are fairly characterized as unintentional.”

“Yet the United States Attorney’s office in this district seems unfazed by the fact that discovery abuses violate constitutional guarantees and misrepresentations erode faith that justice is achievable,” he added. “Something must be done.”

To demonstrate the seriousness of the violations, the appellate court ordered a new trial for federal prisoner Gregory Bartko, who had been convicted ...

The following are various cases in which prosecutors have reportedly engaged in misconduct, ethical violations or criminal behavior, which evidence the need for effective solutions to the persistent problem of prosecutorial abuses.

In 2012, the California Supreme Court overturned the death sentence of Miguel Bacigalupo based ...

Over the past 24 years PLN has reported extensively on the structural dynamics of the American police state, which have resulted in the imprisonment of over 2.3 million people on any given day. Critical to mass incarceration is a quick assembly-line judicial process with ...

Death sentences imposed on prisoners in Arizona, Virginia and Tennessee have been reversed by federal appellate courts as a result of misconduct by prosecutors – including withholding evidence and making improper closing arguments.

While Wells Fargo & Company has sold off much of the stock it once owned in private prison company GEO Group amid a divestment campaign targeting the multi-billion-dollar bank, it has concurrently increased its shares in Corrections Corporation of America (CCA).

Prison officials and corrections experts have long recognized that helping prisoners maintain contact with the outside world decreases the stress, isolation and loneliness that are part of the inherent nature of incarceration. Further, regular communication with those outside ...

Since my CounterPunch article in November 2013, which assessed the state of the movement against mass incarceration, the rumblings of change in the criminal justice system have steadily grown louder. Attorney General Eric Holder has continued to stream his mild-mannered critique by raising the ...

In July 2013, Armor Correctional Health Services agreed to settle a wrongful death suit by paying $800,000 to the family of Allen Daniel Hicks, Sr., who died after being denied medical care while incarcerated at a jail in Hillsborough County, Florida. The county paid another $200,000 to Hicks’ family.

This column provides “habeas hints” to prisoners who are considering or handling habeas corpus petitions as their own attorneys (“in pro per”). The focus of the column is on the Antiterrorism and Effective Death Penalty Act (AEDPA), the federal habeas ...

A September 2013 re-inspection report cited improvements in conditions at a privately-owned prison near Cleveland, Ohio compared to an inspection performed a year earlier, when state auditors identified numerous areas of non-compliance with state standards and conditions so bad that ...

Norris Henderson: A Profile of Commitment to Criminal Justice Reform

Norris Henderson: A Profile of Commitment to Criminal Justice Reform

In 1977, Norris Henderson arrived at the Louisiana State Penitentiary in Angola, more commonly known, then and now, as just Angola. With the weight of a life sentence on his shoulders, he had to confront the prison’s ...

The Double-Edged Sword of Video Visitation: Claiming to Keep Families Together while Furthering the Aims of the Prison Industrial Complex

The Double-Edged Sword of Video Visitation: Claiming to Keep Families Together while Furthering the Aims of the Prison Industrial Complex

by Prof. Patrice A. Fulcher

A federal district court in Missouri has approved a settlement agreement that requires Missouri Department of Corrections (MODOC) officials to provide notice when books and publications sent to state prisoners are censored and withheld.

The settlement resolves a class-action suit filed by Bobbie ...

Assistant District Attorney Lynn M. Nichols, 47, assigned to the homicide unit in Philadelphia, was arrested on October 4, 2013 for filing a false police report as part of a scheme to seek revenge against an ex-boyfriend. ...

Former Alaska Deputy Attorney General and prosecutor Patrick Gullufsen, 66, was suspended from the practice of law for 18 months in July 2013 after a Superior Court found he had “blatantly lied” about forensic analysis of DNA evidence during ...

In a rare public rebuke of a prosecutor found to have engaged in a “deliberate pattern of misconduct,” the Connecticut Appellate Court vacated a defendant’s murder conviction based on the prosecutor’s improper remarks during closing arguments.

Reginald “Reggie” Griffin, 53, was sentenced to death for the July 12, 1983 stabbing of James Bausley in a yard at the Moberly Correctional Center (then known as the Missouri Training Center for Men). In August 2011, ...

A Florida prosecutor who engaged in text messages, cell phone calls and dinner dates with the judge presiding over a capital murder trial has been suspended for two years by the Florida Supreme Court. The ...

Alabama: A March 2, 2014 fight at the Elmore Correctional Facility resulted in eight prisoners being transported to Jackson Hospital, where three were admitted for further treatment. Details on the extent of the prisoners’ injuries and the circumstances of the fight were not released.