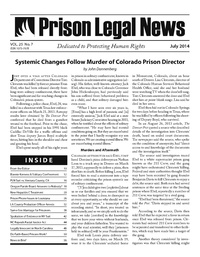 Just over a year after Colorado Department of Corrections Director Tom Clements was killed by former prisoner Evan Ebel, who had been released directly from long-term solitary confinement, there have been significant and far-reaching changes in Colorado’s prison system. ...

Rick Raemisch, Colorado’s new corrections director, wanted to better understand the experience of solitary confinement – so he spent a night in segregation at a state prison.

Raemisch had been on the job for seven months when he decided to ...

Bonnie Kerness: Pioneer in the Struggle Against Solitary Confinement

Bonnie Kerness: Pioneer in the Struggle Against Solitary Confinement

On May 29, 2014, in a significant victory for the First Amendment rights of prisoners and those who correspond with them, the U.S. District Court for the Central District of California granted a preliminary injunction barring Ventura County’s jail ...

Oregon Parole Board: “Don’t Have to Explain Nothing to Nobody”

Oregon Parole Board: “Don’t Have to Explain Nothing to Nobody”

For at least the fifth time, a state court has ordered the Oregon Board of Parole and Post-Prison Supervision (Board) to provide more than boilerplate reasons for its decisions. There is little reason to believe, however, that the Board has ...

Hepatitis C (HCV) is a blood-borne virus that is typically spread through intravenous drug use (i.e., sharing needles), tattooing with non-sterile needles, and sharing razors, toothbrushes, nail clippers or other hygiene items that may be exposed ...

The Eighth Circuit Court of Appeals held on September 20, 2013 that an Arkansas jail guard was not entitled to qualified immunity for his deliberate indifference to a detainee’s serious medical condition which resulted in the detainee’s death. ...

The Ninth Circuit Court of Appeals has held that damages are required, as a matter of law, when a parolee is incarcerated for objecting to compelled participation in a religious-based drug treatment program.

The Advocate reported in March 2014 that tensions were high between Louisiana Public Service Commission (PSC) Chairman Eric Skrmetta and PSC Commissioner Foster Campbell during a hearing on issues related to prison and jail phone rates.

Alabama’s prison system is the first – and currently only – in the nation to require visitors to be fingerprinted. In late 2012, the Alabama Department of Corrections (ADOC) implemented the new policy due to what officials claimed was a need for greater efficiency. A ...

On May 23, 2014, the Medical Examiner’s Office in Nashville completed an autopsy report on Tennessee state prisoner Jeffery Sills, 43, who was murdered at the South Central Correctional Facility in Clifton, Wayne County on March 28. The facility is ...

The government of the Indian state of Tamil Nadu is expanding a program that allows prison industries to compete in the open marketplace under the ironic brand name “Freedom.” Prison industry programs already exist at nine central prisons, three women’s prisons and ...

The Eleventh Circuit Court of Appeals has affirmed the denial of a death row prisoner’s habeas corpus petition that contended he was denied a fair trial by an impartial judge and jury because the jurors gave inappropriate ...

The Los Angeles County Probation Office has cited tougher self-policing and stricter hiring standards for a dramatic decrease in the number of employees arrested for driving under the influence and various other crimes, but the union representing probation officers complained the ...

To correct a “grave miscarriage of justice,” Pennsylvania U.S. District Court Judge Anita Brody granted a writ of habeas corpus to a state prisoner and vacated his conviction and death sentence for a murder that “in ...

On August 29, 2013, the Kentucky Supreme Court affirmed an appellate decision that found an Adjustment Committee (AC) in a prison disciplinary proceeding had violated a prisoner’s due process rights by not meeting the “some evidence” standard as ...

A former guard at the Monroe County Correctional Facility in Rochester, New York received six months in jail plus 10 years’ probation and was required to register as a sex offender after he pleaded guilty in April 2013 to sexually ...

BOP Grievance System Contributes to “Compliance or Defiance” by Prisoners

BOP Grievance System Contributes to “Compliance or Defiance” by Prisoners

A 2013 study found that the grievance system utilized by the federal Bureau of Prisons (BOP) appears to have become an important tool to defuse prisoner complaints, supporting the belief that the failure of BOP officials to ...

The Oregon Court of Appeals held that a prosecutor’s failure to comply with state restitution laws did not deprive a trial court of authority to impose restitution after sentencing.

Oregon law requires the prosecutor to “investigate and present ...

Prisoners in England, including those in the highest security classification, are being allowed to enter into same-sex civil partnerships due to a policy change that mirrors changes to same-sex marriage laws in an increasing number of states in ...

Following a murder conviction, Indiana prisoner Kelly S. Thomas was sentenced to 65 years in prison. After his ...

The Ninth Circuit Court of Appeals held last September that prison officials are liable for violations of the Americans with Disabilities Act (ADA) committed by private employer contractors.

On July 19, 2013, the Seventh Circuit Court of Appeals reversed a grant of summary judgment to three defendants, holding there was sufficient evidence for a jury to find they acted with deliberate indifference to a prisoner’s ...

On September 4, 2013, a New York federal district court held that a jail official was precluded from testifying in a prisoner’s lawsuit about what she supposedly witnessed on surveillance video footage that had ...

The Third Circuit Court of Appeals held on August 26, 2013 that a judge may resolve factual disputes relevant to the exhaustion of administrative remedies without the participation of a jury. It also held ...

In June 2013, North Carolina Governor Pat McCrory signed legislation repealing the state’s Racial Justice Act of 2009 (the Act), a controversial law that supporters said was an effort to address racism in death penalty cases. Opponents, however, argued it merely clogged the legal ...

Shrinking state budgets across the country are leading to prison closures that in turn have a negative impact on communities that depend on the facilities as a source of jobs and revenue. [See: PLN, June 2013, p.1; April 2009, p.1]. Small towns in Kentucky, Georgia and New York are among ...

The warden and head of security at the Liberty County Jail (LCJ) in Liberty, Texas have been fired in the wake of allegations that the chief of security sexually assaulted a female prisoner at the facility. The 285-bed jail is operated by the New ...

Following a 2011 federal appellate court ruling, the U.S. Department of Justice (DOJ) initially tried to delay the release of federal prisoners who were wrongly convicted in North Carolina. The government later announced that it would ...

There are a lot of faith-based prison programs out there. As of 2005, 19 states and the federal government had some sort of residential faith-based program, aimed at rehabilitating participating prisoners by teaching them subjects like “ethical decision-making, anger management, victim restitution” and ...

On February 18, 2014, the Securities and Exchange Commission (SEC) granted a request filed by for-profit prison company GEO Group to exclude a shareholder resolution that sought to reduce the high cost of phone calls made by prisoners ...

On August 20, 2013, the Seventh Circuit affirmed a district court’s denial of qualified immunity in a case concerning an Illinois pretrial detainee’s death due to medical neglect.

Phillip Okoro, 23, was arrested for a misdemeanor property offense ...

Prison Legal News continues its efforts to defend its First Amendment right to communicate with prisoners in the Nevada Department of Corrections (NDOC). In 1999 the NDOC banned all copies of PLN, claiming the publication constituted “inmate correspondence.” PLN filed suit and was ...

The Illinois Supreme Court held in September 2013 that a $50 State’s Attorney fee authorized in habeas corpus cases does not apply to non-habeas collateral proceedings.

After an Illinois trial court dismissed a post-conviction petition filed by ...

The Seventh Circuit Court of Appeals has held that an Illinois prisoner’s complaint that frequent lockdowns for substantial periods of time deprived him of exercise and caused him various health problems stated an Eighth Amendment claim. However, ...

Arizona: A prisoner serving time for gang- and drug-related offenses, as well as his attorney-wife, mother, sister, ex-wife and another woman have been indicted on more than 250 charges following a two-year investigation into the New Mexican Mafia prison gang. Angel Lopez Garcia is accused of being ...