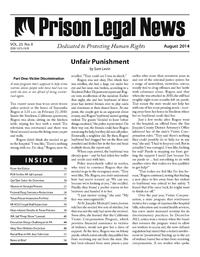 A state program that’s supposed to help crime victims denies people who have had run-ins with the law or are afraid of being victimized again.

The front door was wide open when police arrived at the home of Samantha Rogers at ...

Jails on Indian reservations across the U.S. are housing more offenders despite a decline in violent crimes, according to a report released last year.

The most recent annual Survey of Jails in Indian Country by the Bureau of Justice Statistics (BJS) reported ...

I have long observed that it costs a lot of money to be poor in America. Since our criminal justice system falls almost exclusively on those who are poor, it should be no surprise that a great deal of time and energy goes into ...

After 29 prisoners at a jail in Kenosha County, Wisconsin did not receive their monthly copies of Prison Legal News or informational brochures and soft-cover books mailed by PLN, PLN filed suit in federal court alleging First and ...

The qui tam provisions of the federal False Claims Act (FCA)1 exist to encourage whistleblowers who are aware of fraud against the government to bring such information forward. See 31 U.S.C. §§ 3729-3733. Private contractors ...

How to Starve the For-profit Prison Beast

How to Starve the For-profit Prison Beast

I know some private prison lobbyists who would love it if you were found with a cell phone. Assuming, of course, that you’re already locked in one of the prisons their clients operate in Oklahoma.

Introducing a cell phone into ...

Five former Georgia prison guards have pleaded guilty and three were convicted by a federal jury in connection with a severe beating that left a handcuffed prisoner hospitalized with acute brain damage. The charges followed state and federal law enforcement ...

In response to an ethics complaint filed against Temple University professors Simon Hakim and Erwin A. Blackstone, a Temple official wrote in July 2014 that she had examined the complaint and the University took action as a result.

It’s always hard for the federal government to admit its mistakes, especially when they have ruined tens of thousands of lives, devastated inner-city neighborhoods and cost taxpayers billions of dollars. But a recent vote by the U.S. ...

Ninth Circuit: Prisoner’s Service of Process for Other Prisoner Not Protected Conduct

Ninth Circuit: Prisoner’s Service of Process for Other Prisoner Not Protected Conduct

On September 10, 2013, the Ninth Circuit Court of Appeals affirmed the dismissal of a prisoner’s retaliation claim, holding that serving a summons for another prisoner is not constitutionally protected conduct.

With factories employing more than 5,000 prisoners at 37 facilities, mostly in the eastern part of the state, Texas Correctional Industries (TCI) is a large and diversified operation. However, critics question the relevance of the job skills that prisoners learn, ...

The Supreme Court of South Carolina, exercising the sort of common sense not found in the courts of more “liberal” states like California, held on July 3, 2013 that retroactive application of a law that increases the requirements for parole ...

Prison Legal News continues its efforts to defend its First Amendment right to communicate with prisoners in the Nevada Department of Corrections (NDOC). In 1999 the NDOC banned all copies of PLN, claiming the publication constituted “inmate correspondence.” PLN filed suit and was ...

A federal district court in Michigan granted a preliminary injunction that requires officials at the Livingston County Jail (LCJ) to deliver letters sent by the ACLU to specific prisoners and to return the mail if a ...

Reversal of Oregon Parole Postponement Due to Incorrect Psychological Evaluation

Reversal of Oregon Parole Postponement Due to Incorrect Psychological Evaluation

The Oregon Court of Appeals has held that a prisoner’s release was improperly postponed for two years on the basis of an erroneous psychological evaluation report.

The Seventh Circuit has held that a district court did not abuse its discretion when it denied a prisoner’s motion for sanctions based on the erasure of prison security tapes that allegedly would have provided ...

The Eighth Circuit Court of Appeals has upheld a district court’s grant of qualified immunity in a civil rights action brought by four ex-prisoners who were held beyond their release dates.

The Fifth Circuit Court of Appeals has reversed a denial of summary judgment against jail medical officials who substituted ibuprofen for Percocet when treating a prisoner’s gunshot wound.

Prisoners across the nation are currently experiencing the oppressive heat of summer – particularly in the Southern states. Those incarcerated in Texas, however, have not just been sweating due to high temperatures. They ...

Accusations of sexual harassment and anti-male bias at the highest levels of the U.S. Immigration and Customs Enforcement (ICE) bureau resulted in a shakeup at the agency and two federal lawsuits, one of which settled for $175,000.

"They were directing them to do it like dolls. Like taking clothes off a Barbie doll,” stated Seattle, Washington attorney James C. Egan, referring to a pattern of videotaping female detainees in holding cells at the Puyallup City Jail ...

On August 28, 2012, Dr. Lewis Jackson, 37, was indicted by a federal grand jury for sexually abusing prisoners at the United States Penitentiary (USP) in Atlanta, Georgia. The alleged abuse occurred while Jackson was out on bond pending ...

In January 2013, the U.S. District Court for the Western District of Washington denied a motion for summary judgment filed by the Bureau of Prisons (BOP), seeking qualified immunity in a Bivens lawsuit brought by ...

A Washington prisoner’s conviction and death sentence for murdering a female prison guard has cost taxpayers $1.6 million, while the guard’s family settled a lawsuit against the state for $900,000.

As previously reported in PLN, convicted ...

A long-standing federal class-action lawsuit is challenging the constitutionality of Pennsylvania’s execution protocol, and one of the issues in the case involves the use of lethal injection drugs obtained from a compounding pharmacy.

The execution drugs used by the Pennsylvania ...

Three Louisiana prison officials have pleaded guilty to federal charges related to their role in the beating of a prisoner at the Louisiana State Penitentiary in Angola.

In a case involving the death of a pretrial detainee due to lack of medical treatment, the Fifth Circuit Court of Appeals upheld a district court’s order granting qualified immunity to a contract doctor at ...

A growing number of jails are no longer putting booking photos of arrestees online in order to prevent websites such as mugshots.com from obtaining and posting them, then charging people to remove them.

At least seven states have passed ...

As previously reported in PLN ...

On October 12, 2012, a New Jersey state superior court held that Community Education Centers (CEC), a private prison contractor, was not required to disclose its records under the state’s Open Public Records Act (OPRA), N.J.S.A. § 47:1A-1 to ...

On October 9, 2013, the Oregon Court of Appeals held that a trial court lacked the authority to require a criminal defendant to pay $37,400 in court-appointed attorney fees.

Oregon criminal defendants may be ordered to pay ...

"Peremptory challenges are used in trial courts throughout this state, often based largely or entirely on racial stereotypes or generalizations,” declared Washington State Supreme Court Justice Steven Gonzalez. “As a result, many qualified ...

Report: Prisons in Honduras are Dangerous, Violent and Corrupt

Report: Prisons in Honduras are Dangerous, Violent and Corrupt

When a February 2012 fire at a prison in Comayagua, Honduras killed 361 prisoners after guards abandoned their posts – leaving the prisoners to die in their cells – there was hope that the resulting international attention focused ...

On October 21, 2013, the Seventh Circuit Court of Appeals reversed a district court’s dismissal of a former prisoner’s malicious prosecution claim.

While investigating a March 2001 burglary-arson at a high school in Frankton, Indiana, police officers, ...

The Ninth Circuit Court of Appeals held on October 30, 2013 that a district court’s failure to provide notice before dismissing a complaint for non-service and denying leave to amend were abuses of discretion.

The Kansas Supreme Court held on October 4, 2013 that a state law denying DNA testing to prisoners convicted of second-degree murder violates the Equal Protection Clause of the Fourteenth Amendment.