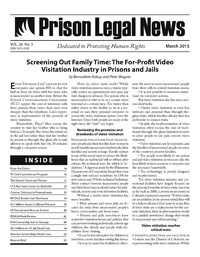 Screening Out Family Time: The For-Profit Video Visitation Industry in Prisons and Jails

Screening Out Family Time: The For-Profit Video Visitation Industry in Prisons and Jails

by Bernadette Rabuy and Peter Wagner

Every Thursday, Lisa* logs on to her computer and spends $10 to chat for half an hour via video with her sister who is incarcerated in another state. Before the Federal ...

This month’s cover story reports on the relatively recent phenomenon of video visitation. While video visits are technologically new, the underlying principle upon which they are being implemented is not.

PLN has reported extensively on the prison telephone industry and its ruthless gouging of ...

The Michigan Supreme Court held on June 3, 2014 that the governor does not have the power to revoke a completed commutation of sentence. It further held that where it is the governor’s clear intent to commute a sentence and ...

Reforms instituted by Maryland officials in an effort to curb violence in the state’s prison system have done little to stem the number of prisoner homicides, according to statistics released by the Maryland Department of Public Safety and Correctional Services.

An increasing number of attorneys, legislators and prisoner advocacy groups are calling for reforms to Texas laws governing the civil commitment of sex offenders, with many warning that the state’s civil commitment program may be unconstitutional due ...

One Phoenix TV station learned first-hand the consequences of letting the target of a news story find out too much about it in advance.

The United States and Torture

The United States and Torture

Two of the things that governments tend to cover-up or lie about the most are assassinations and torture, both of which are widely looked upon as exceedingly immoral and unlawful, even uncivilized. Since the end of the Second World War the United ...

In a decision that displayed its displeasure with California parole officers’ disregard for both the spirit and statutory requirements of the Americans with Disabilities Act (ADA), the Ninth Circuit reversed the dismissal of an ADA Title ...

Civil and criminal case filings in federal courts have grown dramatically over the past two decades, but at the same time the number of judges available to hear them has barely increased according to a report by researchers at Syracuse University. ...

Lawsuits Over Riot at CCA Prison in Colorado Settle for $600,000

Lawsuits Over Riot at CCA Prison in Colorado Settle for $600,000

Corrections Corporation of America (CCA), confronted with the prospect of a jury trial scheduled to last 25 weeks on the claims of almost 200 current and former prisoners who suffered injuries during a 2004 riot at ...

In December 2014, Allegheny County, Pennsylvania Controller Chelsa Wagner released an audit report on Corizon Health’s compliance with its contract to provide medical care at the county jail in Pittsburgh.

The Georgia Court of Appeals held in March 2014 that Fulton County sheriff’s deputies who detained a man to execute a debt judgment can be held liable for violating his rights.

Hundreds of undocumented immigrants are housed at the GEO Group-operated Broward Transitional Center (BTC) in Pompano Beach, Florida, and many are victims of mistreatment and policy violations according to a report issued by an immigrants’ rights group.

When he declared a state of emergency – as he did multiple times after being elected in 2010 – former Rhode Island Governor Lincoln D. Chafee had more on his mind than just public safety. The governor acknowledged that he ...

On August 12, 2012, a Nevada federal district court approved a notice of proposed settlement in a class-action civil rights suit brought by a Jewish prisoner over the announced intent of the Nevada Department of Corrections (DOC) to stop providing ...

Some did it for money. Others for love, or something like it. Whatever their motives, at least 21 California Department of Corrections and Rehabilitation (CDCR) employees faced internal investigations in the first six months of 2014 for allegedly smuggling cell phones ...

n January 18, 2013, an Illinois federal jury awarded a state prisoner $12 million against an Illinois Department of Corrections (DOC) certified medical technician (CMT) who failed to provide anti-seizure medication, which caused the prisoner to ...

In a July 9, 2014 ruling, the Oregon Court of Appeals upheld a trial court’s extension of probation for failure to pay financial obligations due to poverty. The Court of Appeals concluded that Bearden v. Georgia, 461 ...

A former Michigan State Supreme Court Justice is once again a free woman following her release from federal prison after serving time for bank fraud.

Diane Hathaway, 60, was released from a minimum-security women’s prison in Alderson, West Virginia in May 2014 ...

Once Virginia’s chief executioner, Jerry Givens put 62 people to death over a 17-year period from 1982 to 1999. Then he had an epiphany that pushed him to use his experience to advocate against the death penalty.

The Georgia Supreme Court held on June 16, 2014 that sovereign immunity does not bar an award of attorney fees and litigation costs against the Georgia Department of Corrections (GDOC).

The ruling resulted from certiorari review of ...

Renowned attorney Dan Manville, co-author of the Prisoners’ Self-Help Litigation Manual, has produced another must-have book for everyone who’s incarcerated.

On August 15, 2014, the Sixth Circuit Court of Appeals ruled in favor of five death row prisoners in Kentucky who sued the director of the Department of Corrections (DOC) under the Religious Land Use and Institutionalized Persons ...

The Sixth Circuit Court of Appeals reversed a grant of summary judgment in a prisoner’s civil rights action, holding that a reasonable jury could conclude a guard had “inflicted serious pain” on the prisoner “with malicious ...

The California Court of Appeal has held that documents in the possession of a prisoner who is providing legal assistance to another prisoner cannot be used to validate the first prisoner as an associate of a prison ...

The Ninth Circuit Court of Appeals held on July 2, 2014 that a claim that a jail policy banning male guards from supervising female prisoners violates Title VII’s prohibition against sex discrimination could not ...

In March 2013, a federal district court granted a preliminary injunction to Prison Legal News that prohibited jail officials in Walton County, Georgia from refusing to deliver PLN’s publications to prisoners. The court declined to grant an injunction ...

On May 4, 2014, in a corrected decision, the Ninth Circuit Court of Appeals held that lengthy segregation without periodic, meaningful reviews may give rise to a protected liberty interest.

In addition to general population housing, the Oregon ...

In a May 12, 2014 opinion, a Texas Court of Appeals held that the former wife of a prisoner who spent over 24 years in prison was not entitled to a portion of the $2 million he received in ...

$1.3 Million Settlement in Prisoner’s Death at Michigan Jail; Claims Against Other Defendants Dismissed

$1.3 Million Settlement in Prisoner’s Death at Michigan Jail; Claims Against Other Defendants Dismissed

When Michigan’s Saginaw County agreed to pay $1.3 million to settle a civil rights lawsuit stemming from a prisoner’s medical-related death, it may have been left with a case of buyer’s remorse. Following the settlement, the ...

In April 2014, a California federal district court denied summary judgment to jail guards and medical staff in a case involving the death of a detainee caused by Tasing and severe beating ...

On January 15, 2014, the Texas Court of Criminal Appeals modified its earlier decisions in which it had presumed that evidence handled by a forensic scientist who engaged in misconduct was false and material.

Jonathan Salvador was a ...

On November 15, 2012, a New Mexico federal jury awarded $66,000 to a woman formerly incarcerated at a prison operated by Corrections Corporation of America (CCA) who alleged she had been sexually assaulted by a Correctional ...

On March 25, 2014, the Eighth Circuit Court of Appeals reversed a district court’s denial of qualified immunity on a prisoner’s claims that a delay in providing blood pressure medication caused him to go ...

The widow of a mentally ill man who hanged himself less than an hour after being booked into jail in Orangeburg County, South Carolina is suing the county and other defendants, alleging her husband’s death could have been prevented.

A federal civil rights complaint filed in March 2013 accused employees of Wexford Health Sources of failing to provide appropriate medical care to a pregnant prisoner at Pennsylvania’s Westmoreland County Prison (WCP), resulting in the death of her nearly 8-month-old unborn ...

On April 11, 2014, the Third Circuit Court of Appeals rejected a prisoner’s motion to intervene in a 28-year-old class-action case on the eve of settlement.

In 1986, the United States filed suit against the Virgin Islands under the ...

California: On June 24, 2014, the San Bernardino County Sheriff’s Department identified two prisoners killed in an apparent homicide at U.S. Penitentiary Victorville. Brian Kountz, 24, and Robert Howard Ferguson, 49, were pronounced dead at the prison on June 21, 2014. The FBI is investigating their ...