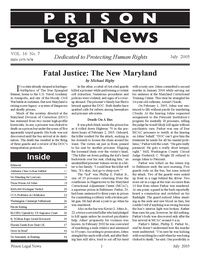 The History of Prison Legal News

Loaded on July 15, 2005 by Paul Wright published in Prison Legal News July, 2005, page 1
Filed under: Media, PLN Litigation, Censorship. Location: United States of America.
In May 1990, the first issue of Prisoners' Legal News (PLN) was published. It was hand typed, photocopied and ten pages long. The first issue was mailed to 75 potential subscribers. Its budget was $50. The first 3 issues were banned in all Washington prisons, the first 18 in all ...
Read more...


Since PLN started in 1990 we have been censored in prisons and jails around the country. We have always attempted to resolve censorship issues administratively, but in cases where the goal was to keep PLN out of prison at any cost, that obviously wasn't possible. We have ...
Read more...


A paraplegic jail prisoner who was transported to a hospital in a non-handicap accessible police car was awarded $600,000 by a federal jury on November 12, 2003 for injuries he claimed resulted from that forced mistreatment.


This issue marks PLN's 180th consecutive issue and our 15th anniversary. When I first started PLN in 1990 I didn't think it would last this long. I am pleased to report that it has and should continue to do so for the foreseeable future.

Loaded on July 15, 2005 by Mumia Abu-Jamal published in Prison Legal News July, 2005, page 11
Filed under: Media, Prisoner Media. Location: United States of America.
I know a little something about newspapers.

As a teenager, I worked on the staff of The Black Panther newspaper. By worked," I mean, I did whatever I was told to do; whatever was needed to help get the paper ready for printing. That meant writing articles, typing out others ...
Read more...

Loaded on July 15, 2005 by Todd Matthews published in Prison Legal News July, 2005, page 12
Filed under: Media, Prisoner Media. Location: United States of America.
It's difficult to talk about Leonard Schroeter's law career without discussing one topic in particular: civil rights. After graduating from Harvard Law School in 1951, Schroeter went to work for the National Association for the Advancement of Colored People (NAACP), then headed by the late Supreme Court Justice Thurgood Marshall. ...
Read more...


On February 5, 2004, the Alabama Department of Corrections (ADOC) agreed to pay $90,000 to a prisoner who was refused safety glasses and later suffered an eye injury while working at a prison recycling center.

If you are confined and are suing in federal court prison or jail staff for an incident that occurred while locked up, you are required to exhaust the administrative grievance system that exists. There are no exceptions to exhaustion of the ...
Read more...

Loaded on July 15, 2005 by Michael Rigby published in Prison Legal News July, 2005, page 18
Filed under: Police Misconduct, Searches, DNA Testing/Samples, Crime. Location: Texas.
More than two years after the closure of its DNA division, the Houston Police Department (HPD) crime lab remains a lesson in how not to run a forensics unit. Recent developments include the discovery of 280 boxes of misplaced evidence and a revelation that an analyst from a private laboratory ...
Read more...

Loaded on July 15, 2005 published in Prison Legal News July, 2005, page 21
Filed under: Sex Offenders (Discrimination), Computers, Sentencing, Parole, Internet. Location: California.
The California Court of Appeals granted habeas corpus relief sought by a paroled child molester who complained that the condition of parole forbidding him from either using a computer or getting on the Internet was unreasonable. Ramon Stevens was convicted in 1997 of lewd conduct on a child. When arrested, ...
Read more...


The U.S. Supreme Court ruled that the strict scrutiny test, not the more deferential legitimate penological interest test, applied when determining the constitutionality of the California ...
Read more...


In a recently-published report, the Bureau of Justice Statistics (BJS) of the U.S. Department of Justice documented the soaring costs of the justice system in the United States.

The BJS report is for the year 2001 and includes statistics on expenditures and employment in the justice ...
Read more...

Contraband Cell Phones On The Rise In U.S. Prisons

Loaded on July 15, 2005 published in Prison Legal News July, 2005, page 24
Filed under: Guard Misconduct, Telephones, Telephone Access. Location: United States of America.
Though drugs and weapons have long been a bane to prison officials everywhere, prisons around the country and the world are now experiencing a new contraband problem: cellular telephones.

Texas prison officials learned how serious the problem was during a months-long undercover investigation that began in the fall of 2003. ...
Read more...

An Oklahoma-based advocacy group, A Perfect Cause, performed a computer search of the nation's sex-offender registries and cross-matched it with the addresses of the nation's state-regulated nursing homes. This revealed that ...
Read more...