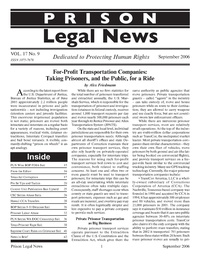 For-Profit Transportation Companies: Taking Prisoners, and the Public, for a Ride

According to the latest report from the U.S. Department of Justice, Bureau of Justice Statistics, as of June 2005 approximately 2.2 million people were incarcerated in prisons and jails nationwide not including immigration detention centers and juvenile facilities. This enormous imprisoned population is not static; prisoners are moved both intrastate and interstate on a regular basis for a variety of reasons, including court appearances, medical visits, detainer extraditions, Interstate Compact transfers and bail bond remands. A mobile, constantly-shifting prison on wheels is an apt analogy.

While there are no firm statistics for the total number of prisoners transferred and extradited annually, the U.S. Marshals Service, which is responsible for the transportation of prisoners and immigration detainees in federal custody, receives around 1,000 transport requests per day and moves nearly 300,000 prisoners each year through its Justice Prisoner and Alien Transportation System (JPATS).

On the state and local level, individual jurisdictions are responsible for their own prisoner transportation needs. Although almost all sheriff''s offices and state Departments of Correction maintain their own prisoner transport services, they also rely heavily on privately-operated companies, especially for interstate trips. The reasons for using such for-profit transport services boil down to cost and convenience, both ...

The United States District Court (D.D.C.) granted PLNs motion for summary judgment and ordered the U.S. Bureau of Prisons (BOP) to provide investigative material requested by PLN under the Freedom of Information Act (FOIA) without payment of search or duplication fees. PLN, exercising its statutory right ...

Florida Guards a Day Late and a Dollar Short with Failure to Exhaust Defense; $180,000 Verdict Upheld

Florida Guards a Day Late and a Dollar Short with Failure to Exhaust Defense; $180,000 Verdict
Upheld

This issue reports positive developments we have acheived in two lawsuits, one against the Washington Department of Corrections and the other against the federal Bureau of Prisons. Both cases have taken a lot of time and energy on the part of both PLN staff and our attorneys to win.

The Tennessee State Court of Appeals upheld a $500,000 compensatory damage award against Corrections Corporation of America (CCA), to a woman who was taken hostage by an escaped CCA prisoner.

Mike Settle was a prisoner at Hardeman County Correctional Facility (HCCF), a CCA prison in Whiteville, Tennessee. On August 14, ...

Coronado Cantu took over the Cameron County Sheriff's office in January 2001. He took up residence inside the Texas jail in June 2005. Cantu was charged with heading a crime ring that included drug trafficking, extortion and prostitution of female prisoners.

Animo was Cantu's watchword.   Defined as spirit or enthusiasm, ...

A Captive Audience For Salvation

NASHVILLE, TENN. - America has the highest incarceration level in the world, and its prisons serve too consistently as revolving doors. Are faith-based programs in prisons the answer to these disturbing trends?

For a number of years it seemed that rights of prisoners were being slowly narrowed, if not
eliminated by not only the lower federal courts but also the United ...

The U.S. Supreme Court held that the Pennsylvania Department of Corrections (PDOC) policy of
banning its most disruptive prisoners receipt of all non-legal and non religious magazines,
newspapers and photographs as a behavior ...

On June 29, 2006, the Supreme Court held that prisoners being held in the military concentration
camp prisons at Guantanamo Bay, Cuba (Gitmo), could not be tried by the special military
tribunals set up by President Bush in a comprehensive military order dated November 13, 2001
(the Order). See 66 ...

No Room in Prison? Ship Em Off Prisoners have become unwitting pawns in a lowest-bidder- gets-the-convict shuffle game

No Room in Prison? Ship Em Off Prisoners have become unwitting pawns in a lowest-bidder-
gets-the-convict shuffle game

It has been an arduous, surreal journey for eight Hawaiian female prisoners sent to do their time
on the mainland.

The plight of this group of women housed, ...

In a document filed February 27, 2006, the U.S. government agreed to pay an Egyptian who was
caught up in the post-9-11 sweep and detained for a year at the Brooklyn Metropolitan
Detention Center (MDC) $300,000 to settle his claims of having been abused by MDC guards.

On April 6, 2005, a judge in the U.S. District Court for the Western District of Texas levied a $500
sanction award against two Assistant U.S. Attorneys for their unethical, unprofessional, and
dishonest conduct in a prisoner lawsuit.

Lonoke Mayor Thomas Privett and police Chief Jay Campbell were caught abusing the state's
prisoner work program. Arkansas Department of Corrections requested, in early August 2005,
that the program be suspended after learning that state prisoners had been used to repair the
police chief's boat and make improvements to his ...

The Nevada Supreme Court reversed a lower court's grant of summary judgment on a former
prisoner's suit for failing to exhaust administrative remedies.

Nevada Department of Corrections (NDOC) prisoner George Simmons was brutally beaten by
another prisoner on April 14, 1997. He sustained a broken jaw, fractured vertebrae ... [and] ...

The case was certified as a class action, ...

On November 30, 2005, the U.S. District Court for the Eastern District of Kentucky tentatively
approved the settlement of a class action lawsuit alleging unconstitutionally overcrowded
conditions at the Campbell County Jail in Newport, Kentucky.

Built in 1991, the Campbell County Detention Center was designed to hold 135 prisoners. It ...

CCA Fineable in New Contracts With Colorado and Hawaii

Corrections Corporation of America has signed new contracts with Colorado and Hawaii which,
for the first time, include the possibility of the states imposing liquidated damages if CCA fails
to provide the contracted services. The provisions resulted from a lengthy interruption of
services to female prisoners at a private womens ...

Several Virginia sheriffs have used public money to pay for services from Christian groups that
minister to prisoners, the Virginia-Pilot reported on March 2, 2006. The payments have drawn
criticism from some watchdog groups that advocate for a strong separation of church and state.
Portsmouth Sheriff Gary Waters has paid ...

Washington DOC Settles Mail Censorship Suit with PLN for $442,500 in Fees and Damages

Outagamie County, Wisconsin, has agreed to pay $75,000 to a man whose withdrawal from
methadone went untreated at the county jail.

Richard Foelker was participating in a methadone treatment program for heroin addiction when
he checked himself into the Outagamie County Jail on April 27, 2000, to serve a sentence ...

Get in a fight behind bars and in most states, youll serve somewhere between a few days or
months in segregation. Refusal to cut your hair in Virginia and youll be segregated until you
comply.

Florida's Brevard County has been sued by three local hospitals seeking payment for medical
care rendered to prisoners who incurred injuries during their arrests. The County refused to pay,
arguing the detainees technically were not in custody at the time of treatment.

Roderick Keith Johnson, a prisoner who garnered national attention with allegations that Texas
prison officials allowed him to be bought and sold as a sex slave, has lost his federal lawsuit
against the Texas Department of Criminal Justice (TDCJ). Following the October 2005 verdict,
Johnson was returned to prison for ...

A federal court in South Carolina found that prison officials were deliberately indifferent to an
asthmatic prisoner's medical condition by exposing him to environmental tobacco smoke (ETS),
from February 1999 to November, 2001. The court awarded $3,200, or $100 a month, finding
that while plaintiffs injuries were not de minimis, ...

Leon Williams, a prisoner in a state work release center, left the center to walk to work but was 90
minutes late getting there. When he arrived he was arrested and charged with escape under Fla.
Stat. sec. 944.40. ...

The U.S. Supreme Court held that before filing a 42 U.S.C. § 1983 complaint, a prisoner must
first fully, properly and timely exhaust his administrative remedies. Specifically, as here, failure to
properly exhaust remedies below may not later be cured by claiming that no other remedies ...

After a public outcry condemned the health care services provided to prisoners held by the
Delaware Department of Corrections, (DDOC) the Delaware Legislature has passed a bill that
provides an inflation adjustment for services and created three oversight positions. PLN
reported upon the lack of health ...

Dismissal of Failure to Protect Claim Reversed; No Showing Necessary to Survive Rule 12(b)(6) Dismissal

Dismissal of Failure to Protect Claim Reversed; No Showing Necessary to Survive Rule 12(b)(6)
Dismissal

The Seventh Circuit Court of Appeals reversed a district court's dismissal of a civil committees
failure to protect and equal protection claims, for failure to state a claim under Fed.R.Civ.P. 12(b)
(6).

The Oklahoma Legislature has enacted a law that prohibits former prisoners from bringing a civil
action unless the prisoner has exhausted all administrative remedies. To PLNs knowledge, this is
the first law of its kind.

The legislation, which was signed by the Governor on April 11, 2006, becomes effective
November ...

California: On July 20, 2006, about 100 prisoners at the California Institution for Men in Chino
rioted in Borrego Hall in the Reception Center West. The fight was between white and Hispanic
prisoners. No guards were injured and order was quickly restored using pepper spray.

The Estate of a Pennsylvania prisoner has settled its civil rights action alleging Eighth and
Fourteenth Amendment violations for the wrongful death of Virginia Brejcak, 42, at the Bucks
County Correctional Facility (BCCF) for $470,000. The federal lawsuit was brought against ...