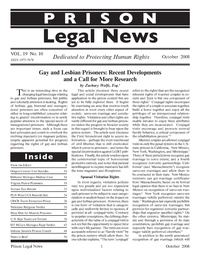 Gay and Lesbian Prisoners: Recent Developments and a Call for More Research

This is an interesting time in the changing legal landscape relating to gay and lesbian prisoners, but public and scholarly attention is lacking. Rights of lesbian, gay, bisexual and transgendered prisoners are often conceived of either in long-established concerns relating to guards’ discrimination or in newly ...
Read more...

The fallout mainly stemmed from hundreds of DUI cases that were improperly handled by Ann Marie Gordon during her stint as a manager ...
Read more...

Loaded on Oct. 15, 2008 by Paul Wright published in Prison Legal News October, 2008, page 8
Filed under: Discrimination, Gay/Lesbian, Editorials. Location: United States of America.
This issue’s cover story on the rights and treatment of gay and lesbian prisoners stems from the dearth of such coverage everywhere else. In February of this year I was a speaker on a panel in Manhattan on the rights of Gay, Lesbian, Bisexual and Transgender prisoners. A few months ...
Read more...

Over 60% of Oregon Prisoner Suicides Linked to Mental Illness, Isolation

Over 60% of Oregon Prisoner Suicides Linked to Mental Illness, Isolation

Nathan Bashaw, 21, had a mere 259 days left to serve until his April 1, 2008 release date. He was serving a sentence in the custody of the Oregon Department of Corrections (ODOC) for attempted robbery. ...

From the advent of federal oversight of medical services for Michigan prisoners, the focus has been on three Michigan Dept. of Corrections (MDOC) facilities that house the state’s sickest prisoners in close proximity to Duane ...

On March 18, 2008, Hawaiian First Circuit Court Judge Sabrina S. McKenna awarded a pre-operative transgendered prisoner who had been sexually abused and harassed by a prison guard at the O’ahu Community Correctional Center (OCCC) $310,000 ...

Politics in Virginia have trumped reason when it comes to releasing eligible offenders on parole. Notwithstanding examples of successful reintegration into society after such prisoners are released, political pressure has driven the parole board’s grant rate down from 40% to 5.6%. It also drove previous parole ...
Read more...

Ohio has maintained a sex offender registry since 1963. The first substantial revisions to the registration law occurred in 1996; ...
Read more...

In December, 2007, the New York State Supreme Court (this is a trial level court) held that the New York Department of Corrections’ (NYDOC) policy of contracting for prisoner collect telephone calls, which resulted ...

In 2002, the Tennessee Supreme Court ruled that a private company which performed services that were “functionally equivalent” to those provided by a public agency had to comply with the state’s Public Records Act, T.C.A. § 10-7-501, et seq. ...

As part of a bizarre medical policy, the California Dept. of Corrections and Rehabilitation (CDCR) has for years imposed a rule that requires women prisoners who apply for alternative community incarceration programs, where they can live with their ...

Four former male and female pre-trial detainees sued the Saginaw County, Michigan jail for an outrageous disciplinary policy that forced them to sit in a segregation cell visible to passers-by of both sexes, after first being stripped naked ...

In December 2007, Harris County, Texas officials announced they were sending an additional 200 jail prisoners – 180 of them women – to a privately-run prison in northeast Louisiana. This brings the total number of Harris County prisoners ...

Loaded on Oct. 15, 2008 published in Prison Legal News October, 2008, page 28
Filed under: Medical, HIV/AIDS, Medical Experiments/Exploitation. Locations: Florida, Louisiana, New York, Wisconsin.
A relatively new rapid HIV test has been used on over 31,000 jail prisoners in four different states. The testing was made possible by grants from the Centers for Disease Control (CDC).

The grants were part of a project to expand the use of HIV tests to jail prisoners nationwide, ...
Read more...

The U.S. District Court for the Eastern District of New York has held that a federal prisoner, removed from the general population and placed in administrative segregation (SHU) pending investigation of in-prison charges, could not be ...

The Seventh Circuit U.S. Court of Appeals held that a prisoner who sued guards for allegedly brutally injuring him during an uncuffing procedure must be given a new trial wherein evidence of the guards’ actions would ...

In 2003, Montana began including persons convicted of manufacturing illegal drugs on its sex offender and violent offender Internet registry. Since then, Tennessee, Minnesota, Kansas and Illinois have created online registries for people convicted of making or selling methamphetamine. The information on ...

In a rare conclusion to a guard’s violent attack on a prisoner, a Jefferson County, Alabama jail guard was fired, prosecuted, convicted and found liable in a civil lawsuit. The guard, Antonio Allums, continues to ...

On February 14, 2008, a Florida jury found that Prison Health Services (PHS) was not negligent in misdiagnosing a jail prisoner’s broken neck, which left him a permanent quadriplegic. The series of events that led to this tragic result for ...

The California Court of Appeal has reversed the Fresno Superior Court’s denial of a name-change petition filed by a federal prisoner awaiting sentencing while housed in the Fresno County Jail. The California law precluding a state prisoner ...

Loaded on Oct. 15, 2008 published in Prison Legal News October, 2008, page 36
Filed under: Injury -- Misc., Excessive Force, Guard Brutality/Beatings. Location: California.
An elderly veteran, while being booked into the Santa Clara County, California jail in December 2005 for failure to appear at a civil trial, struggled with deputies during the fingerprinting process and was subdued with violent force. He claimed he suffered a fractured eye socket, broken nose, impaired vision, acute ...
Read more...

U.N. Committee Against Torture: Tasering is a “Form of Torture”

On November 23, 2007, the United Nations Committee Against Torture (CAT) concluded that using the Taser X-26 electric stun gun is a “form of torture” that “can even provoke death.” CAT is charged with overseeing the application of the U.N. Convention Against Torture and Other Cruel, Inhuman ...

Wisconsin’s First District Court of Appeals has held that an intentional contempt finding against the Milwaukee County Jail (MCJ) entitles prisoners who were injured by the contemptuous conduct to recover monetary sanctions.

On December 5, 2007, the U.S. District Court for the Western District of Missouri granted a motion for judgment of acquittal in a criminal prosecution for failure to register as a sex offender.

Division 2 of the Washington Court of Appeals has upheld a denial by the state Department of Corrections (DOC) of a prisoner’s request to use funds from his Personal Inmate Savings Account (PISA) ...

The Sixth Circuit U.S. Court of Appeals upheld a $4.5 million damage award against a Michigan Department of Corrections (MDOC) doctor whose deliberate indifference resulted in the death of ...

$7,025 Award in Slip and Fall From Ohio Prison Bunk

Loaded on Oct. 15, 2008 published in Prison Legal News October, 2008, page 40
Filed under: Medical, Injury -- Misc., Premises Liability. Location: Ohio.
The Ohio Court of Claims has awarded a former Ohio prisoner $7,025 for injuries related to a slip and fall from a prison bunk.

Stacy Rose slipped and fell while climbing down from his bunk at the Chillicothe Correctional Institution. Rose suffered injuries to his lower back, left ankle, and ...
Read more...

The Eleventh Circuit Court of Appeals has ordered a Georgia federal district court to terminate a permanent plan for charitable donations from the Inmate Welfare Fund at the Glynn County Detention Center (GCDC). The matter was before the Eleventh Circuit after ...

An arbitrator awarded Washington State probationer Mark S. Rice $44,515 in a claim alleging negligence, emotional distress, and aggravation of a preexisting elbow injury. Washington Department of Corrections Community Corrections Officer Jenny Sheriden was alleged to have overstepped her boundaries when ...

The U.S. District Court for the Eastern District of Michigan issued a declaratory judgment and remedial injunctive order granting new hearings to non-drug offense parolable Michigan prisoners sentenced to life prior to 1992, who had been ...

A Missouri prisoner was awarded $305,021 after being struck by a tree. In February 2000, Hortense Cain, a female prisoner at the Women’s Correctional Center in Vandalia, was assigned to a Missouri Department of Transportation ...

On February 22, 2008, the Washington State Department of Corrections (DOC) fired Colleen Brixley, 48, a fiscal analyst at the McNeil Island Corrections Center, for stealing $103,000 from the McNeil Offender Welfare Betterment Fund. The fund is used primarily to ...

A Virgin Islands federal district court has held territory officials in contempt, ruling that they willfully violated the court’s orders. That finding came in a class action suit dating back to 1994 which challenges “inhumane and dangerous conditions” at the ...

The United States has settled a lawsuit alleging negligent supervision and observation of a prisoner who fell from a top bunk. While the settlement was estimated to be for $449,000, it could be more due to guaranteed annuity ...

Loaded on Oct. 15, 2008 published in Prison Legal News October, 2008, page 47
Filed under: Police Misconduct, Racial Discrimination, Searches, DNA Testing/Samples, Wrongful Conviction, Municipal Liability. Location: North Carolina.
On February 16, 2007, a North Carolina man who spent 18 years in prison for a rape he didn’t commit settled with the State and the City of Winston-Salem for $1,958,454.

The Wyoming Department of Corrections has settled a prisoner’s failure to protect claim for $350,000. The action was filed in U.S. District Court by Wyoming State Penitentiary prisoner Jason C. Huff.

Huff had informed prison officials upon intake that he feared ...

The Texas Department of Public Safety has announced it is adding information about where sex offenders work and go to school to its online sex offender registry. The registry update will cost $1.2 million, which is being paid by a ...

Loaded on Oct. 15, 2008 by Gary Hunter published in Prison Legal News October, 2008, page 50
Filed under: Juveniles, Failure to Protect (Juveniles). Location: Texas.
It took less than three months for Texas officials to reach an agreement after the U.S. Department of Justice (DOJ) filed suit against the Texas Youth Commission (TYC), alleging mistreatment of youthful offenders. A final settlement was entered by the court on May 5, 2008.

The lawsuit brought against the ...
Read more...

Loaded on Oct. 15, 2008 published in Prison Legal News October, 2008, page 50
Filed under: News, News in Brief. Location: United States of America.
California: On April 3, 2008, four prison guards at the state prison in Tehachapi were stabbed by two Hispanic prisoner members of the Surenos gang, and the entire state prison system was placed on lockdown. Other guards used batons, pepper spray and physical force to stop the attack. The injured ...
Read more...

In 2004 Eduardo Grau, 56, was driving an ice cream truck in New York state when he molested a 9-year-old girl. It was discovered that Grau had been in the habit ...
Read more...