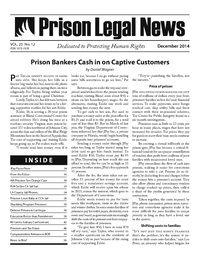 Pat Taylor doesn’t believe in going into debt. She keeps her bills in a freezer bag under her bed, next to old photo albums, and believes in paying them on time religiously. For Taylor, living within your means is part ...

The U.S. Department of the Treasury’s inspector general, Eric Thorson, will audit Treasury’s ...

JPay Fined in Pennsylvania, Michigan for Operating without a License

JPay Fined in Pennsylvania, Michigan for Operating without a License

As indicated in this issue’s cover story, JPay, a company incorporated in Delaware and based in Miami, Florida, and the industry leader in prison money transfer services, has been fined $408,500 for operating without a license in at least seven ...

The Best 500 Nonprofit Organizations for Prisoners and Their Families (2nd Ed.), edited by George Kayer

The Best 500 Nonprofit Organizations for Prisoners and Their Families (2nd Ed.), edited by George Kayer

Help! For prisoners and their families, “help” is a word that’s all too familiar. And while many share problems that ...

Welcome to the last issue of Prison Legal News for 2014. By now, all PLN subscribers should have received our annual fundraiser letter, which includes our last annual report. If you have not yet made a donation, please do so. Unlike many other non-profit ...

The en banc First Circuit Court ofAppeals is considering whether to order the Massachusetts Department of Correction (MDOC) to comply with a federal district court’s order requiring that a transgender prisoner suffering from Gender Identity Disorder ...

The Ninth Circuit Court of Appeals held on April 25, 2014 that a California law which denies good conduct credits to prisoners who are validated gang members held in a Security Housing Unit (SHU) ...

In a victory for the First Amendment rights of prisoners and those who correspond with them, Prison Legal News recently obtained a substantial settlement in a lawsuit filed against the Ventura County Sheriff’s Office in California.

Battling the Administration: An Inmate’s Guide to a Successful Lawsuit, by David J. Meister

Battling the Administration: An Inmate’s Guide to a Successful Lawsuit, by David J. Meister

When asked what the first step would be in challenging a disciplinary charge, prisoners will give a variety of answers. Some say it ...

Some blame prison understaffing on a weak talent pool or an inability to hire sufficient staff in the rural areas where prisons are often located. Others theorize the problem is more systemic, arguing that corrections departments and private prison ...

Texas officials said they were at a loss to explain an unexpected surge in prison homicides during 2012, when the number of murders rose to the highest level in more than a decade. But others pointed to understaffing, inexperienced guards ...

A criminal ethics charge filed against a former U.S. Marshals Service agent in Arizona who had applied for a job with a private prison company he previously monitored has been dropped, and prosecutors let him enter a ...

Officials with Los Angeles County’s jail system have been criticized by County Supervisor Zev Yaroslavsky for exploiting prisoners and their families by charging excessive phone rates. “Everyone’s making a lot of money at the expense of ...

On January 15, 2014, the Ninth Circuit Court of Appeals reversed the dismissal of a prisoner’s claim related to “debriefing” with respect to his alleged gang affiliation.

In 2007, California prisoner Ricky Gonzales was validated as ...

Washington law authorizes sentence reductions for “earned time,” which is ...

In 2000, Francis Moulton was sentenced to 42 months in prison on a robbery conviction. The trial ...

$690,000 Settlement in HRDC Suit Over Death of Prisoner’s Baby at CCA Jail

$690,000 Settlement in HRDC Suit Over Death of Prisoner’s Baby at CCA Jail

In 2011, Valerie Nabors was serving a sentence at Nevada’s Florence McClure Women’s Correctional Center in Las Vegas for stealing more than $250 in casino chips. She was pregnant and went into labor while incarcerated. Nabors was handcuffed and taken to an ambulance where guards shackled her ankles together, even though Nevada had previously outlawed the use of restraints on pregnant prisoners during labor and delivery.

Guards refused to remove the shackles when an ambulance supervisor protested, and again at the hospital when a nurse questioned their use. Finally, the guards complied after a delivery room nurse insisted the restraints be removed, and Nabors underwent an emergency cesarean section. Within 10 minutes of the surgery, however, guards again shackled Nabors’ ankles and chained her to the bed.

During the ordeal, Nabors suffered a separation of her pubic bones and several pulled muscles in her groin, which her physician determined were a direct result of the restraints. “We were shocked,” said Staci Pratt of the ACLU of Nevada. “And it takes a lot to shock an ACLU attorney.”

After suing the Nevada Department of Corrections, the state paid Nabors a $130,000 settlement in January ...

Less than eight weeks before a former Florida prison guard was scheduled to go to trial on charges of fraudulently collecting nearly $3 million in workers’ compensation, he died in a Tampa hospital. Doctors listed his cause of death ...

Debtors’ Prisons Prevail in Las Vegas, Thanks to Prosecutors and Casino Markers Law

Debtors’ Prisons Prevail in Las Vegas, Thanks to Prosecutors and Casino Markers Law

Anyone who has ever been threatened with jail or actually locked up for passing a bad check or failing to pay a debt knows that so-called “debtors’ prisons” are alive and well in the ...

On November 7, 2012, a federal judge granted a temporary restraining order (TRO) enjoining the implementation of parts of the Californians Against Sexual Exploitation Act (“CASE Act”), passed by voters as Proposition 35, which requires registered sex offenders (RSOs) ...

Education is Better than Punishment: Something We Can All Support!

Education is Better than Punishment: Something We Can All Support!

I learned in the harshest way possible that in the United States of America, every felony conviction, no matter what the judge officially assigns in months or years, quite literally results in a life sentence. As ...

The number of suicides at the District of Columbia Jail was cited as the top concern of an independent agency whose mission is to monitor conditions for thousands of incarcerated D.C. offenders housed in the District’s jail ...

Civil rights groups and New York State officials are hailing as “historic” an agreement to enact sweeping reforms in the way the state’s prison system uses solitary confinement as a means of punishing prisoners.

Under the unprecedented February 2014 ...

The right of defendants facing criminal charges to be represented by counsel is the bedrock of our criminal justice system, expressly enshrined in the Sixth Amendment.

An underlying doctrine to that right holds that counsel becomes an agent of the ...

In spite of a three-year downward trend, Texas continues to lead the nation with the largest state prison population. At the same time, the state has pursued a variety of incentives to address a chronic shortage of prison guards. ...

The federal Bureau of Prisons (BOP) is operating under revised guidelines intended to expand the circumstances under which federal prisoners can seek a reduction in their sentences through the agency’s Compassionate Release Program, following two scathing reports that took the BOP to ...

s political efforts to reform the nation’s immigration laws continue to falter despite garnering headlines and generating contentious public debate, the latest statistics from Immigration and Customs Enforcement (ICE) reveal that undocumented immigrants continue to be deported in large ...

A former guard with the District of Columbia Department of Corrections (DOC) sued his ex-employer in November 2012, claiming he developed PTSD and suicidal tendencies after a prisoner threw feces in his face.

Guard Walter Sampson’s altercation with the ...

On November 19, 2013, the Supreme Court of Oklahoma affirmed in part, reversed in part and remanded for further proceedings a case involving a registered sex offender required to register for life due to an amended state law ...

On March 28, 2014, a Florida Court of Appeals held that a former Department of Corrections guard charged with aggravated battery for assaulting a prisoner was entitled to pursue a “stand your ground” defense pursuant ...

Alabama: Six people, including an Alabama state prison guard and two prisoners, were arrested on April 10, 2014 for their roles in a large-scale meth operation. Phillip Burgin, 23, was employed at the Kilby Correctional Facility before being stopped in Oklahoma while transporting 30 pounds of ...