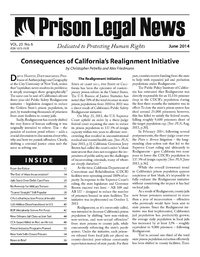 by Christopher Petrella and Alex Friedmann

David Harvey, Distinguished Professor of Anthropology and Geography at the City University of New York, writes that “capitalism never resolves its problems; it simply rearranges them geographically.” The same can be said of California’s almost three-year-old Public Safety Realignment ...

In an unpublished ruling, the Ninth Circuit Court of Appeals reversed a federal district court’s sua sponte dismissal of a California prisoner’s claims that prison officials improperly removed money from his trust account without adequate due ...

When Prison Legal News first started publishing in 1990, the Internet only existed for the military and a few academic institutions. PLN made its first online appearance in 1998 on what was a fairly simple website by today’s standards. We have gone through several ...

A Florida jury has awarded a prisoner $1.2 million in a negligence suit against the GEO Group, the nation’s second-largest for-profit prison company, following a trial that was delayed more than a year after a juror said he was afraid to reach ...

Are We Really Witnessing the End of Mass Incarceration?

Are We Really Witnessing the End of Mass Incarceration?

“This is the beginning of the end of mass incarceration.” – Natasha Frost, associate dean of Northeastern University’s school of criminology and criminal justice

After more than three decades of “tough on crime,” the New Jim Crow, ...

In the wake of a Tennessee federal district court hearing in a lawsuit challenging conditions at the Maury County Jail (MCJ), the number of suits filed by prisoners against the jail has nearly doubled.

The sheriff of Dallas County, Texas had a good reason for giving prepaid debit cards to prisoners containing the balance of their trust fund accounts when they were released from jail.

“There was too much money handling,” said ...

Two studies by the LBJ School of Public Affairs at the University of Texas at Austin found that juveniles held in Texas jails while awaiting trial as adults are often isolated with no access to education programs, and that ...

A California high school football star who was exonerated after serving five years in prison for kidnapping and raping a classmate has fulfilled his dream of playing for the NFL, and there are now plans to make a movie about his ordeal. Meanwhile, the woman who falsely accused him has ...

In an 8 to 3 decision, the en banc Seventh Circuit Court of Appeals reversed a ruling by Illinois U.S. District Court Judge Wayne Anderson, as well as an appellate panel that had partly affirmed that ruling, and held ...

"I feel like I’m at my wit’s end,” says a mother about her two kids on the A&E reality TV show “Beyond Scared Straight.” It’s a feeling many parents relate to before sending their kids to local “scared ...

On August 16, 2013, the Seventh Circuit Court of Appeals held for the second time that a prisoner’s request to form an atheist study group must be given the same consideration as other religious study groups. ...

The Kansas Supreme Court reversed a prisoner’s sentence for possession of contraband – a small amount of marijuana – after it held the sentencing court misinterpreted its statutory authority by concluding it could ...

A federal district court awarded $200 to a Utah prisoner who sued on the grounds that prison officials interfered with his right to freely exercise his religion. However, the Tenth Circuit Court of Appeals dismissed part of the prisoner’s appeal because ...

In May 2013, a California appeals court invalidated regulations promulgated by the California Department of Corrections and Rehabilitation (CDCR) regarding the manner in which the state executes condemned prisoners. The appellate court held that the CDCR had “substantially ...

An Oregon judge has held that a prosecutor improperly seized money from a prisoner’s trust account to pay a court-ordered “compensatory fine.”

In 2006, Norman Earl Schlunt was convicted of poisoning and suffocating his business partner and sentenced to ...

On July 31, 2013, the Ninth Circuit Court of Appeals joined the Seventh Circuit in holding that the Heck doctrine does not bar all parole condition challenges brought under 42 U.S.C. § 1983.

The Second Circuit Court of Appeals held in September 2013 that the Religious Land Use and Institutionalized Persons Act (RLUIPA) does not create a private right of action against state officials in their individual capacities.

On September 19, 2013, the Court of Appeals of Washington held that the state constitution creates a right of public access to the courts shared by civil litigants and the general public. It also held, however, ...

The Eighth Circuit Court of Appeals has upheld the denial of summary judgment to a guard who was aware of a threat of harm to a pretrial detainee, but reversed as to a jail ...

The United States is billed as the world’s largest and greatest democracy. However, it is also “one of the world’s strictest nations when it comes to denying the right to vote to citizens convicted of crimes,” according to ...

A suspected terrorist diagnosed as mentally ill will not be extradited from Britain to the United States to face charges that he conspired to establish a terrorist training camp in the U.S., a European court has ruled. ...

A Texas meat manufacturer has pledged to adopt new procedures to ensure compliance with food safety laws and paid almost $400,000 to resolve a U.S. Department of Agriculture (USDA) investigation into mislabeled meat that was intended for ...

The U.S. Department of Justice (DOJ) intervened in a class-action lawsuit that alleged “abusive and unconstitutional conditions of confinement” at the Orleans Parish Prison (OPP) in New Orleans, Louisiana. The lawsuit, filed in U.S. District Court by the Southern Poverty Law Center (SPLC), resulted in a consent judgment approved by ...

Carlos Marino, incarcerated for a 1997 drug conspiracy conviction, submitted a Freedom of Information Act (FOIA) request to the Drug Enforcement Administration (DEA), seeking the agency’s investigative file for a co-conspirator who had testified against him at trial. The DEA denied ...

Three former Florida prison guards, including a security chief, were sentenced to probation and ordered to perform community service after entering guilty or no contest pleas to charges that they accepted bribes to perform favors for prisoners, including supplying contraband, providing special treatment and ...

CCA Guard Killed During Riot was on Prisoners’ “Hit List”

CCA Guard Killed During Riot was on Prisoners’ “Hit List”

A federal lawsuit filed by the family of a guard murdered during a riot at a Mississippi facility claims that prison officials knew the guard was on a “hit list” compiled by prisoners when he was called ...

The Seventh Circuit Court of Appeals has reversed a district court’s grant of summary judgment to a jail guard accused of being deliberately indifferent to a prisoner’s safety.

The case involved an incident that ...

As the U.S. economy remains sluggish and companies consider layoffs to cut costs, the outlook for prison industry programs is mixed, with some reporting increased revenue and others reporting net losses.

Prison industries are big business according to a ...

The closure of a minimum-security facility in Ohio created temporary jobs for prisoners who are being released, through a pilot program to help integrate them into society while saving the state money. The catch? The former prisoners work at ...

The Nebraska Supreme Court has reversed the theft conviction of a county prosecutor who stole funds from a pretrial diversion program he created.

When John Blake Edwards took office as the county attorney for Keith ...

On August 12, 2013, the Seventh Circuit Court of Appeals held that a jail social worker could be held liable for ignoring a detainee’s obvious risk of committing suicide.

The Supreme Court of Pennsylvania held on July 9, 2013 that a mandamus petition related to an underlying complaint concerning prison conditions itself constitutes prison conditions litigation within the meaning of the state’s Prison Litigation Reform Act ...

What New York State is doing with some of its closed prisons is like dragging an old, unwanted couch out to the dumpster and then slapping a price tag on it.

In an effort to address ...

Arizona: Former state prison guard Robert Joseph Hamm, 34, was sentenced on September 9, 2013 to 11 years in prison for having a sexual relationship with a Tucson teenager. He had previously served a year in prison after pleading guilty in 2011 to having sex with the ...