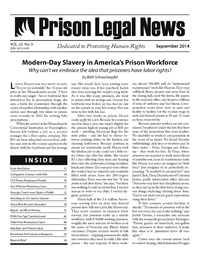 Why can’t we embrace the idea that prisoners have labor rights?

Laurie Hazen has bad taste in men. “They’re my downfall,” the 41-year-old jokes in her Massachusetts accent. “I have to really stay single.” An ex-boyfriend first introduced her to prescription drugs, she says, a habit she ...

Texas: Unconstitutional to Revoke Probation Due to Refusal to Self-Incriminate During Polygraph or Therapy

Texas: Unconstitutional to Revoke Probation Due to Refusal to Self-Incriminate During Polygraph or Therapy

On May 8, 2013, the Texas Court of Criminal Appeals held that a probationer’s term of community supervision cannot be revoked because he had refused to answer incriminating questions while taking a lie ...

Since its inception, Prison Legal News has been reporting on prison slavery and the exploitation of prison slave labor. This month’s cover story continues that tradition. As we have repeatedly noted, the 13th Amendment to the U.S. Constitution did not abolish slavery; rather, it ...

Numerous lawsuits have been filed against companies that contract with prosecutors to collect debts in bad check cases because, opponents say, the firms contact debtors on official district attorney letterhead and use draconian tactics such as harassing ...

On August 20, 2014, Corrections Corporation of America (CCA), the nation’s largest for-profit prison operator, issued a press release that attempted to put a positive spin on over $8 million in back wages the company had agreed to pay ...

Early last year, Los Angeles set aside a sliver of land in its Harbor Gateway neighborhood for the city’s newest and smallest park: two jungle gyms on a fifth of an acre.

The project was more than just an effort ...

Human rights groups have applauded efforts to open Georgia courts to members of the public, putting an end to a widespread practice of courtrooms being declared off limits – a practice that was condemned as a violation of the ...

Imagine this scenario: Drug Enforcement Administration (DEA) agents bust a small-time drug dealer for, let’s say, nickel-and-diming in heroin. They take him to booking, run his fingerprints and discover this is his third arrest. As a multiple offender facing ...

A New York state judge has ordered the release of hundreds of pages of documents related to the investigation of the 1971 riot at the Attica Correctional Facility, but not before striking enough information from the ...

In the State of Tennessee, judges are elected. Before incumbent appellate court judges are placed on the ballot, however, they must be evaluated by the Judicial Performance Evaluation Committee (JPEC), which recommends whether they should be retained ...

A recent study revealed that the number of HIV-positive prisoners in both state and federal facilities nationwide is declining and, for the first time, the AIDS mortality rate for prisoners has fallen below the national average among the ...

The federal Bureau of Prisons (BOP) is facing criticism for its apparent failure to adequately oversee a Florida-based company responsible for coordinating the payment of BOP bills for prisoner medical care in North Carolina.

On September 11, 2013, the Massachusetts Supreme Court held that a prisoner who had been convicted of a sex offense, then given a level three classification by the Sex Offender Registry Board (SORB) due ...

Laws that restrict where sex offenders can live when they are released from prison leave many homeless, but one south Florida apartment manager is providing housing opportunities by leasing apartments to offenders on liberal terms.

“I just believe that everybody ...

Fifth Circuit: Prisoner Who was Raped May Proceed with Lawsuit against Lock Company

Fifth Circuit: Prisoner Who was Raped May Proceed with Lawsuit against Lock Company

In a July 9, 2013 opinion, the Fifth Circuit Court of Appeals held that the statute of limitations in a federal lawsuit against a manufacturer of cell door locks at a county jail, brought ...

In an October 9, 2013 ruling, the Oregon Court of Appeals held that Oregon courts have personal jurisdiction over Oklahoma prison officials with respect to claims brought by an Oregon prisoner transferred to Oklahoma.

On September 23, 2013, the Eleventh Circuit Court of Appeals vacated a summary judgment order that upheld a civil commitment center’s policy which limited circulation of a detainee’s controversial newsletter among residents at the facility. ...

Manny Aragon, 66, a former New Mexico state Senate leader, was released from federal prison on December 5, 2013. Although most federal prisoners are sent to a halfway house to complete the remainder of their sentence, Aragon was released to home confinement ...

In April 2013 the Eighth Circuit Court of Appeals upheld a preliminary injunction granted by a federal district court in a lawsuit challenging the placement of video cameras in bathrooms at the Iowa Civil Commitment ...

On July 22, 2013, the First Circuit Court of Appeals dismissed an appeal by the Massachusetts Bar Counsel challenging the failure of a district court and a three-judge disciplinary panel to discipline an Assistant U.S. Attorney ...

Alabama’s Supreme Court has held that the plain language of § 14-8-6, Ala. Code 1975 does not prohibit the Alabama Department of Corrections (ADOC) from collecting, over and above the 40% threshold established ...

The Seventh Circuit Court of Appeals has affirmed the dismissal of a prisoner’s lawsuit over his placement on suicide watch and in administrative segregation.

The Fourth Circuit Court of Appeals held on November 1, 2013 that the attorney fee provision of the Prison Litigation Reform Act (PLRA) is constitutional. The ruling was in alignment with other appellate courts that have considered the ...

The Eighth Circuit Court of Appeals held in August 2013 that the Sex Offender Registration and Notification Act (SORNA) does not require a registered sex offender (RSO) who moves to a foreign country to notify the state ...

The Eleventh Circuit held in July 2013 that an Alabama Department of Corrections (ADOC) policy requiring prisoners to maintain short hair does not violate their rights under the Religious Land Use and Institutionalized Persons Act (RLUIPA).

The Fifth Circuit Court of Appeals has held that the “mailbox rule” of Houston v. Lack, 487 U.S. 266 (1988) now applies to determining the date when Texas prisoners file state habeas corpus petitions for the purpose of calculating ...

Texas: Clerk May Not Bill Defendant for Attorney Fees Not Ordered by Court

Texas: Clerk May Not Bill Defendant for Attorney Fees Not Ordered by Court

The Texas Court of Criminal Appeals held last year that a district clerk may not send an indigent prisoner a bill of costs for court-appointed attorney fees in his criminal case when the court ...

The Fifth Circuit Court of Appeals held last year that a district court erred when it dismissed a prisoner’s claim that he was severely injured when a guard driving a transport van slammed on the brakes, ...

The Seventh Circuit Court of Appeals is among the latest federal courts to tackle the issue of restitution for victims of child pornography – an issue addressed in a recent U.S. Supreme Court decision that legal observers say only muddies ...

The supplier pledge for America’s largest retailer states: “Forced or prison labor will not be tolerated by Wal-Mart. Wal-Mart will not accept products from Vendor Partners who utilize in any manner forced labor or prison labor in the manufacture or ...

On January 18, 2013, following a five-day trial, a jury in the U.S. District Court for the Eastern District of Missouri returned a verdict of $2.85 million against the City of Sullivan, finding that negligence by employees at ...

On October 7, 2013, the New York City Housing Court held that a tenant who could not attend court proceedings due to incarceration was entitled to relief from a default judgment.

In 2013, Pennsylvania Department of Corrections (DOC) officials announced they would provide financial incentives to privately-operated community corrections facilities – halfway houses – that reduce the recidivism rates of offenders released from those facilities.

Civil libertarians and prisoner advocacy groups have expressed shock and outrage at the discovery that some Global Positioning System (GPS) tracking devices, used to monitor the movement and whereabouts of many pre-trial defendants, parolees, sex offenders and other persons, ...

The Supreme Court of Indiana has held that a court order regarding whether a sex offender could be retroactively classified as a Sexually Violent Predator (SVP), and required to register as a sex offender ...

As of August 2014, twenty-eight states were still struggling with the costs and bureaucratic nuisance of implementing the Sex Offender Registration and Notification Act (SORNA) – also known as the Adam Walsh Act – eight years after it was passed by ...

For most prisoners in jail awaiting trial, voting is an afterthought. But volunteers at the District of Columbia jail manned the polls for the first two days of early voting in October 2012 and instructed prisoners on how to fill out ballots.

Brazil: Brazilian authorities announced on January 15, 2014 that an investigation would be initiated into atrocities at the infamous Pedrinhas penitentiary. Bloody battles between rival prison gangs resulted in complaints of mass rapes of women visitors and the posting of a video depicting decapitated and tortured prisoners. ...