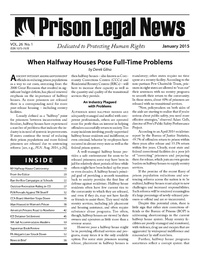 A recent interest among government officials in reducing prison populations as a way to cut costs, stemming from the 2008 Great Recession that resulted in significant budget deficits, has placed renewed emphasis on the importance of halfway houses. As more prisoners ...

Community First Services, Inc., established by Jack A. Brown III in 2005 to provide transitional services for prisoners returning to New York City, has come under scrutiny following news reports that cast doubt not only on the organization’s halfway house but ...

Welcome to the first issue of Prison Legal News for the New Year! By now you should have received our fundraiser packet with our last annual report. First, I would like to thank everyone who has donated to help support our work with the ...

"Selene” had been out of prison for one month when she applied to Dutchess Community College and Ulster Community College, both part of the State University of New York system. SUNY requires applicants to ...

The Texas Court of Appeals, First District, held in December 2013 that the admission of jail disciplinary records at a penalty phase hearing in a criminal trial violated the Confrontation Clause of the Sixth ...

On November 19, 2013, the Supreme Court of Oklahoma affirmed in part, reversed in part and remanded for further proceedings a case involving a registered sex offender required to register for life due to an amended state law ...

A federal court in Colorado has heldthat a mentally ill prisoner who spent over 12 years in administrative segregation must be afforded an opportunity for outdoor recreation. The court also ordered the Colorado Department of Corrections ...

In spite of a three-year downward trend, Texas continues to lead the nation with the largest state prison population. At the same time, the state has pursued a variety of incentives to address a chronic shortage of prison guards. ...

On November 14, 2013, the en banc Washington Supreme Court held that the court’s clerk had erred in awarding the state a $200 statutory attorney fee against a prisoner whose personal restraint petition (PRP) was dismissed.

As part of its news reporting, Prison Legal News routinely submits public records requests and Freedom of Information Act requests to government agencies. Most of the time they comply with the law and produce the requested records. Not so in Marshall County, Tennessee.

The Fourth Circuit Court of Appeals has vacated a summary judgment order in favor of prison officials entered in a lawsuit challenging a prison policy that conditioned a prisoner’s ...

On December 19, 2013, the Florida Supreme Court held that a death-sentenced prisoner was entitled to receive his prison and medical records once the governor signs a death warrant; however, he was not entitled to clemency-related ...

On November 8, 2013, the Tenth Circuit Court of Appeals upheld the denial of qualified immunity in a case that involved the shackling of a juvenile detainee in a restraint chair as punishment and denial of mental ...

CCA Board Member Steps Down from Open Government Organization

CCA Board Member Steps Down from Open Government Organization

For example, CCA has vigorously opposed efforts to require the company to comply ...

"How can you not tell a vagina from a penis?” asked Carla Brenner, aka Lamonda Fuller, a female impersonator who filed suit against the City of Nashville, Tennessee and the private company that held him in a women’s facility ...

Colorado prisoner sexually assaulted by a private security guard at a hospital only minutes after she gave birth has filed suit against her attacker, the company he worked for and the Arapahoe County Sheriff’s Office for damages ...

On January 23, 2014, the Tenth Circuit reversed a grant of summary judgment to prison officials in a civil rights action alleging violations of the Religious Land Use and Institutionalized Persons Act (RLUIPA), related ...

America’s Prisons: A Road to Nowhere

America’s Prisons: A Road to Nowhere

Video of Henry McCollum’s release from a North Carolina prison in September 2014 shows the exonerated death row prisoner making his way through a crowd of excited onlookers and into his family’s car, where he could not figure out how to ...

An Oregon State Police investigation has revealed that money believed stolen from the Oregon State Correctional Institution (OSCI) was actually right where it was supposed to be – deposited in the Inmate Welfare Fund (IWF) and ...

The Eleventh Circuit Court of Appeals has reversed a summary judgment order for the defendants in a former prisoner’s civil rights suit that alleged he was denied medical care after prison staff “materially altered” ...

$145,000 Settlement for U.S. Citizen Held on Immigration Detainer due to Racial Profiling

$145,000 Settlement for U.S. Citizen Held on Immigration Detainer due to Racial Profiling

An American citizen who was racially profiled and held in jail on an immigration detainer has reached settlements totaling $145,000 with three government agencies in a civil rights lawsuit.

Ernesto Galarza was arrested in Allentown, Pennsylvania with ...

A former West Virginia public defender has agreed to give up his license to practice law in the wake of a scandal involving allegations that he offered to sell children for sex. The state Supreme Court accepted the annulment of Steve ...

In an unpublished ruling, the Fifth Circuit held on April 1, 2014 that a Texas prisoner’s sleep deprivation-based challenge to the security schedule used by the Texas Department of Criminal Justice (TDCJ) may state a valid claim for violation ...

On March 28, 2014, a Florida Court of Appeals held that a former Department of Corrections guard charged with aggravated battery for assaulting a prisoner was entitled to pursue a “stand your ground” defense pursuant ...

Drug testing in Ohio prisons in October 2012 revealed the highest level of prisoner drug use in more than a decade, though the head of the state corrections department blamed the spike in positive drug ...

Introduction of Nolo Plea to Challenge Prisoner’s Credibility was Error

Introduction of Nolo Plea to Challenge Prisoner’s Credibility was Error

The Third Circuit Court of Appeals held in January 2014 that a Pennsylvania federal district court erred when it allowed into evidence a nolo contendere (no contest) plea for the purpose of challenging the credibility of ...

On February 3, 2014, the California Supreme Court held that a prisoner erroneously denied parole was not entitled to have his parole term reduced by the length of improper confinement.

Johnny Lira was sentenced to an indeterminate sentence ...

"Zero tolerance” is a phrase that has found its way into many facets of our society. But nowhere is it more prevalent than in the vocabulary ...

The Pierce County Jail (PCJ) in Washington State agreed to adopt new policies to protect the religious rights of Muslim prisoners as part of a settlement agreement in litigation brought by the ACLU of Washington and the Public Interest Law Group ...

In December 2013, the Pennsylvania Supreme Court struck down the state’s version of Megan’s Law, holding the legislature had violated the “single subject” rule of the Pennsylvania Constitution.

The Court’s ruling resulted from an appeal filed by James ...

A former prisoner whose sexual assault conviction was reversed after he served seven years in prison can sue his attorney for malpractice after the Michigan Supreme Court denied leave to appeal an appellate court’s ruling.

he Georgia Supreme Court held in February 2014 that a trial court erred in denying the filing of a prisoner’s petition for mandamus seeking access to a law library.

After being sentenced to life plus a term of years, ...

On November 15, 2013, in an unpublished decision, the Fifth Circuit Court of Appeals reversed the summary dismissal of a Texas prisoner’s civil rights action, holding that he did not have to name the defendants in ...

On January 23, 2014, the Florida Supreme Court quashed an appellate court’s order because it exceeded the scope of second-tier review of a prisoner’s habeas corpus petition challenging the revocation of his conditional release.

Alabama: On April 4, 2014, WBRC News reported that six people had been arrested and five others were wanted in connection with a scheme to smuggle drugs hidden in Bibles into the Shelby County Jail. Small index tabs were attached to the Bibles that contained smaller ...