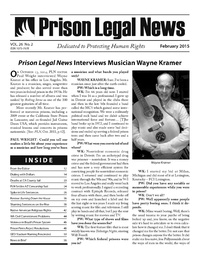 On October 13, 2014, PLN editor Paul Wright interviewed Wayne Kramer at his office in Los Angeles. Mr. Kramer is a musician, singer, songwriter and producer; he also served more than two years in federal prison in the 1970s. He has released a ...

It has been said that freedom of the press is neither free nor cheap. On January 5, 2015, a trial commenced in the courtroom of U.S. District Court Judge Mark Walker in Tallahassee, Florida. Prison Legal News is suing the Florida Department of Corrections ...

Dialing with Dollars: How County Jails Profit From Immigrant Detainees

Dialing with Dollars: How County Jails Profit From Immigrant Detainees

Arali was at home with her three-year-old son, Jose, when she got a call from Suffolk County Jail, a correctional ...

On November 26, 2013, the Washington State Court of Appeals held that when a “drug offender sentencing alternative” (DOSA) is revoked, the court must award credit for time the offender served in community custody.

A Santa Cruz County, California grand jury investigation concluded that a multitude of breakdowns contributed to the deaths of five jail detainees over an 11-month period between August 2012 and July 2013.

Four of the deaths occurred after ...

A 2013 memo issued by then-incoming Wisconsin Department of Corrections (DOC) Secretary Edward F. Wall, in which he warned DOC employees to stop spreading rumors, was apparently another example of contentious relations between the state and its prison guards, and among ...

On May 20, 2014, the Eighth Circuit Court of Appeals affirmed the denial of qualified immunity to a Missouri jail administrator in a case involving the rape of a pretrial detainee. ...

On February 4, 2014, the Eighth Circuit reversed a district court’s denial of qualified immunity, finding that it had applied the wrong constitutional standard.

A recent research study and news reports have revealed an increase in the number of prisoners across the nation – and particularly in Utah – sentenced to life in prison with no possibility of parole.

In a report released in ...

The Montana Supreme Court has unanimously held that a restitution order for extradition costs is invalid.

Mark M. Macy, Jr. was convicted of various felony offenses in Montana. He was transferred to a pre-release center in October 2010, but absconded ...

In 2006, California voters passed Jessica’s Law, which, among other ...

While attempting to liberate Afghanistan from the tyranny of the Taliban, the U.S. and Great Britain have given the Afghans incarceration-related tools and training, ostensibly to improve conditions in that nation’s prisons.

The Seventh Circuit Court of Appeals held in March 2014 that a district court had abused its discretion when it dismissed a prisoner’s suit for failure to pay a filing fee without determining his ability to ...

Eighth Circuit: Jail Guards Denied Summary Judgment for Use of Force against Detainees

Eighth Circuit: Jail Guards Denied Summary Judgment for Use of Force against Detainees

On April 24, 2014, the Eighth Circuit Court of Appeals affirmed the denial of summary judgment to jail guards accused of using excessive force on pre-trial detainees while quelling a riot. However, the appellate ...

The Eighth Circuit Court of Appeals has held that a district court erred in failing to resolve a motion to dismiss based on qualified immunity with respect to a prisoner’s claims related to interference with his mail. ...

The en banc Second Circuit Court of Appeals has held that a Brady claim is not Heck-barred when a defendant’s conviction is vacated but he subsequently pleads guilty to a lesser charge in exchange for immediate release.

By the time I was 7 years old I knew drugs were bad. I didn’t need a parent to sit me down on their knee and tell me this because Saturday morning cartoons were frequently interrupted by an advertisement brought to me by Partnership for a ...

For Shame! Public Shaming Sentences on the Rise

For Shame! Public Shaming Sentences on the Rise

Punishments intended to shame offenders for wrongdoing, popular throughout history, are once again on the rise – particularly as penalties imposed by judges who enjoy seeing their names in the newspaper or on television due to their “creative” ...

Ninth Circuit: Indefinite Stay and Denial of Guardian was Abuse of Discretion

Ninth Circuit: Indefinite Stay and Denial of Guardian was Abuse of Discretion

On March 24, 2014, the Ninth Circuit held that a district court had abused its discretion in refusing to appoint a guardian ad litem for a pro se prisoner who was legally incompetent.

Native American Prisoners Have Right to Tobacco in Religious Ceremonies

Native American Prisoners Have Right to Tobacco in Religious Ceremonies

The Eighth Circuit Court of Appeals has affirmed a South Dakota federal district court’s order holding that Native American prisoners have a right under the Religious Land Use and Institutionalized Persons Act (RLUIPA) to use tobacco during ...

In a 5-2 ruling, the Georgia Supreme Court held on May 19, 2014 that it is not unconstitutional for the state to keep secret the names and other identifying information of persons and entities involved in executions, including those who ...

Washington state’s Special Commitment Center (SCC), which was created to house and treat prisoners classified as violent sexual predators, has become the focus of investigations into staff misconduct. Additionally, the growing number of releases ...

The Eighth Circuit has reversed in part the dismissal of a Missouri prisoner’s claims related to accommodation of his disabilities.

A wave of riots and killings is sweeping inside and outside prisons in Brazil, but authorities and observers differ on whether the violence is the fault of rival gangs competing for the lucrative drug trade, a protest against horrific conditions in ...

On December 23, 2014, GEO Group, the nation’s second-largest for-profit prison firm, demonstrated it was a “grinch” by objecting to a shareholder resolution that would require the company to spend just 5% of its net income “on programs and services ...

On March 12, 2014, the Fifth Circuit Court of Appeals reversed in part a district court’s dismissal of a lawsuit brought by a prisoner who was denied medical treatment after he fell and was injured. ...

A student-led coalition against naming the Florida Atlantic University (FAU) football stadium after private prison firm GEO Group claimed victory in April 2013, when the company withdrew its $6 million donation to the school ...

The Georgia Supreme Court affirmed an appellate court’s ruling that decertified a plaintiff class of indigent parents who were jailed without being provided counsel following civil contempt proceedings brought by the state Department of ...

Missouri prisoner Randall Jackson is an atheist who was required to attend the Offenders Under ...

For those without resources or help from family or friends, being released from jail has always been difficult. A change in policy in Broward County, Florida is leaving even those who have someplace to go stranded and ...

he Tennessee Court of Appeals has held the Tipton County Jail (TCJ) breached its duty of care by failing to provide a pre-trial detainee with proper medical treatment. The ruling reversed a trial court’s judgment following ...

On April 7, 2014, the Ninth Circuit Court of Appeals held that a district court had improperly abstained from hearing a claim that a state court violated the First Amendment by denying prompt access to newly-filed complaints.

Arizona: Ruth Alvarez was battling breast cancer when she was arrested and jailed in Maricopa County for working under a false identity and being in the country illegally. In an unprecedented plea deal, Alvarez was released on April 17, 2014 so she could continue the cancer ...