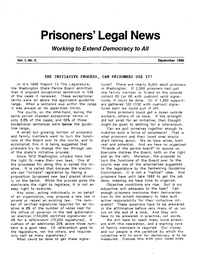 The Initiative Process, Can Prisoners Use It?

Loaded on Sept. 15, 1990 published in Prison Legal News September, 1990, page 1
Filed under: Parole, News, State Legislation. Location: Washington.
In its 1988 Report To The Legislature, the Washington State Parole Board admitted that it imposed exceptional sentences in 53% of the cases it reviewed. These exceptional terms were all above the applicable guideline range. When a sentence was within the range it was always at its uppermost limits.

In the suit, Ms. Atchinson alleged Warden Garner unzipped his pants in front of her, made ...
Read more...

By Paul A. Wright

The TV news lately has been full of governors, legislators, elected officials and citizens who proclaim themselves to be "pro-life" and thus, anti-abortion. The last year has seen attempts by Gov. Martinez in Florida to make abortion impossible to obtain for young and ...
Read more...

Loaded on Sept. 15, 1990 published in Prison Legal News September, 1990, page 3
Filed under: Commentary/Reviews. Location: United States of America.
Letters from readers are encouraged. Words in brackets [like this] reflect material added by the editors in order to clarify a subject. Letters are edited for length. Names of writers will not be published unless specific authorization is given. We not only welcome the input of every reader, we want ...
Read more...

Welcome to PLN #5. Let me start this by talking about some of the articles in this issue. First, there is one on the need to get computers into prisoner hands. State Senator Phil Talmadge, who is a member of the Committee on Corrections, has requested a ...
Read more...

The ole adage about there's only two kinds of power in the world; money power and people power, with the latter being much stronger than the former is true. Across all racial groups, prisoners are drawn from the poorest sectors of society. A warehouse for the ...
Read more...

A lot of us know that our system of justice is a hypocritical one-Just-Us. The rich buy their justice; the poor are served theirs in prison cells every time they're served their cold oatmeal and powered eggs.

The main purpose of this policy is so that the counties, via the DOC, can collect fines, restitution, court costs, etc., imposed by the ...
Read more...

This is addressed to you in prison, whether you are a white supremacist or a black supremacist, or have any other racist sympathies.

What is racism? Racism is a belief that your own race is superior and that all other races are inferior. Racism means that anyone ...
Read more...

Response to the Article "Why Racism"

Let me answer your article in this manner to enlighten you.

First, understand that America is a very racist country. Despite all the laws against discrimination, a person's race is of prime importance to himself and to others with whom he comes in contact with. In ...
Read more...


On July 9, 1990, US District Court Judge Arthur Spiegel entered a preliminary injunction ordering a halt to the practice of Ohio prisoncrats at Lucasville, of firehosing prisoners in their cells. A full trial on the merits will follow.
Read more...


Prisoners are slaves of the state, a status legitimized by the Thirteenth Amendment to the U.S. Constitution. These modern day slaves need every tool they can get in an effort to alter their status and to extend democracy to include all people. Computers in the hands of ...
Read more...