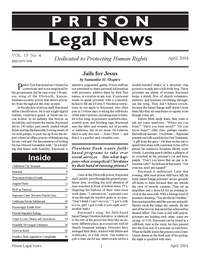 
In the phylum of prison staff, Raymond defies classification. He is not a tight-lipped warden, ...
Read more...

Loaded on April 15, 2004 published in Prison Legal News April, 2004, page 5
Filed under: Failure to Protect (General), Jail Specific, Civil Procedure, State Law Claims, Municipal Liability, Sovereign Immunity. Location: California.
The California Supreme Court ruled that California Govt. Code § 844.6(a)(2) [governmental immunity for injury to prisoner] prevented a city jail detainee who had been beaten by another drunk tank prisoner from maintaining a government tort claim against the city for damages, because a jail prisoner is a criminal detainee, ...
Read more...


In two independent but inconsistent rulings, Kansas Department of Corrections (KDOC) policy IMPP 11-101 (banning gift subscriptions of magazines and newspapers to prisoners) was determined to be a regulation that both did impinge ...
Read more...

Loaded on April 15, 2004 by Paul Wright published in Prison Legal News April, 2004, page 8
Filed under: Editorials, Conditions of Confinement, Prison Tourism/Consumerism. Location: United States of America.
With our recent expansion to 48 pages we will be bringing readers more information than ever before and we also hope it will be more timely than it has been in the past. Readers that send us newspaper clippings and similar information help us stay on top of what are ...
Read more...

Loaded on April 15, 2004 published in Prison Legal News April, 2004, page 9
Filed under: Organizing, Voting, State Legislation. Location: Michigan.
On June 24, 2003, Republican Alabama governor Bob Riley announced he was vetoing the felons' voting bill passed by the state legislature. The bill would have made it easier for certain felons to have their voting rights reinstated. Alabama law imposes a lifetime ban on voting for any person convicted ...
Read more...

Another Death in a Wisconsin Prison


Thirty two years in solitary confinement would be enough to drive many of us to despair. Yet as of April 17, 2004, Herman Wallace and Albert Woodfox of the Angola 3 have each spent the last thirty-two years inside a six by nine foot ...
Read more...

Loaded on April 15, 2004 by Michael Rigby published in Prison Legal News April, 2004, page 14
Filed under: Disciplinary Hearings, Liberty Interests, Qualified Immunity, Ad-Seg Hearings. Location: Louisiana.
The United States Court of Appeals for the Fifth Circuit upheld the denial of prison authorities' motion to dismiss based on qualified immunity because no proper determination was made as to whether prisoners' over 30 years of confinement in extended lockdown created a liberty interest.

Loaded on April 15, 2004 by Bob Williams published in Prison Legal News April, 2004, page 15
Filed under: Disabled Prisoners, Nervous System, Muscular, Damages, Americans with Disabilities Act, Immunity/Liability, Eleventh Amendment Immunity, Sovereign Immunity. Location: New Hampshire.
The First Circuit court of appeals has held that Title II of the Americans with Disability Act (ADA), as applied in this case, abrogates state sovereign immunity. There is now a 6-3 split in the circuits on this issue.

Loaded on April 15, 2004 published in Prison Legal News April, 2004, page 15
Filed under: Reviews, Media, Prisoner Media. Location: United States of America.
On December 16, 2003, Paul Wright and Tara Herivel were awarded the 2003 Myers Outstanding Book Award certificate for Prison Nation: The Warehousing of America's Poor (Routledge, 2003). The award is from the Gustavus Myers Center for the Study of Bigotry and Human Rights in North America.


Murder, riots, drug overdoses, and allegations of official corruption have prompted the Bureau of Prisons (BOP) and the FBI to launch investigations at federal prisons in Texas, Oregon, Arizona, and California.


Bringing itself into line with its sister circuits, the en banc U.S. Sixth Circuit Court of Appeals held that Ohio prisoners may challenge parole procedures under 42 U.S.C. § 1983 provided that adjudication of the ...
Read more...

Disarray in Colorado: Prisoners Hurt by Host of Problems

Loaded on April 15, 2004 by Bob Williams published in Prison Legal News April, 2004, page 18
Filed under: Prison Labor, Work Strikes, Crime/Demographics, Prison/Jail Murders, Statistics/Trends, Overcrowding, Staffing, Parole, Telephone Rates, State Legislation. Location: Colorado.
Society is dynamic, in a state of con-stant flux where change is the only constant, but recent changes in Colorado are turning up the pressure in Colorado's prison system. Prisoner pay has been nearly eliminated while hygiene items are not provided. Prisoner phone rates are now in the hands of ...
Read more...


On March 5, 2003, Jerry Watkins settled his wrongful conviction lawsuit against the Hancock County sheriff's department inIndianapolis and the Indianapolis police department. Watkins was convicted of murdering his 11 year old sister in law and was sentenced to 60 years in prison. ...
Read more...


On May 8, 2003, a 21-page indictment was handed down by a federal grand jury sitting in San Juan, Puerto Rico charging 18 people mostly prisoners for allegedly trafficking heroin and cocaine throughout Puerto Rico's ...
Read more...


On October 17, 2002, Randy Denjen, a guard lieutenant at the Brooklyn, New York Metropolitan Detention Center (MDC) pleaded guilty to charges of causing a prisoner to engage in sexual contact by threatening and placing her in fear, in violation of 18 U.S.C. § 2242(1), and ...
Read more...


On June 10, 2003, the Court of Claims in Rochester, New York, awarded $435,000 for pain and suffering to a New York prisoner who was injured when a forklift tire exploded in his face.


Prisoner Clay Rumley was attempting to repair a ...
Read more...

The Soft Cage: Surveillance in America, From Slave Passes to the War on Terror

Loaded on April 15, 2004 by Scott Christianson published in Prison Legal News April, 2004, page 22
Filed under: Commentary/Reviews, Reviews. Location: United States of America.
The Soft Cage: Surveillance in America,
From Slave Passes to the War on Terror


Big Brother is watching. He may not be able to find Osama Bin Laden or identify the Anthrax Attacker, but he sure ...
Read more...


You may have thought your troubles were over when you were prosecuted for a state or federal crime, until your ...
Read more...


A former warden and two former guards were sentenced in federal court for their roles in connection with the severe beating of a federal prisoner who was being held at a Philadelphia jail.


Hailed as the broadest ruling ever is-sued by a federal judge in a death row conditions of confinement case, and a precedent setting breakthrough in prisoners' rights, conditions at Mississippi State Penitentiary Unit 32-C, Parchman Death Row, were found ...
Read more...


The Florida Police Benevolence As-sociation (PBA) has launched a petition drive to enact an amendment to Florida's constitution that would bar privatization of prisons, jails, and offender supervision. The PBA represents over 30,000 law enforcement, corrections, and ...
Read more...


Prisoners at the Pine Grove Correctional Centre in Prince Albert, Saskatchewan (Canada) have been drinking each other's drug-laced vomit in order to get high. One woman has died as a result of this gut-wrenching practice, and three others ...
Read more...

Loaded on April 15, 2004 published in Prison Legal News April, 2004, page 30
Filed under: Disabled Prisoners, Prison Labor, PLRA, Physical Injury Rule, Education, Damages, Americans with Disabilities Act, Rehabilitation Act, Eleventh Amendment Immunity. Location: Missouri.
The U.S. District Court for the Eastern District of Missouri found that a disabled prisoner was entitled to backpay because he was not reassigned to a premium pay job after he successfully passed the GED test.


A Texas state court of appeals has held that a brief statement of operative facts of prior lawsuits satisfies the requirements of Texas Civil Practice and Remedies Code (TCPRC) §§ 14.004 & 14.005.

Texas Prisoners Have Right to Judicial Review of Administrative Finding


A Texas state court of appeals has held that Texas state prisoners have a right to a judicial review of an administrative finding of destruction of state property in a prison disciplinary action.


Deborah Rodriguez pled guilty to possession with intent to distribute 382 kilograms of cocaine hydrochloride. After being raped by a jail guard while awaiting sentencing, Rodriguez ...
Read more...


In a case applicable to all federal pris-oners incarcerated in private and state prisons the Fifth Circuit Court of Appeals held a federal prisoner who assaults a private person employed at a privately run prison may be convicted of assault of ...
Read more...

A Culture of Prosecutorial Misconduct

California Presentencing Credits Upheld For Jail Time in Another County


The California Supreme Court ruled that while a prisoner was on pre-trial bail from one county, but had been arrested for an unrelated offense in another county - for which the first county then placed a ...
Read more...


The Fifth Circuit Court of Appeals held that a blind prisoner is not excused from the administrative exhaustion requirement of the PLRA, and that a state court finding the prison systems grievance procedure violates Louisiana's State Constitution does not impact federal law. Prisoner Ricky ...
Read more...

Loaded on April 15, 2004 published in Prison Legal News April, 2004, page 34
Filed under: Administrative Exhaustion (PLRA), Court Access, Law Library Access/Adequacy, Damages. Location: Wisconsin.
A U.S. District Court for the Eastern District of Wisconsin held that a prisoner's access to court was impeded because jail officials interfered with his ability to exhaust his administrative remedies with respect to several non-frivolous claims, which were dismissed for failure to exhaust. On these claims, the court awarded ...
Read more...

§ 1983 Disciplinary Challenge Available to Parolee Because Habeas Would Be Moot


The Ninth Circuit U.S. Court of Appeals ruled that a prisoner suing under 42 U.S.C. § 1983 for damages resulting from unconstitutional procedures in an earlier disciplinary hearing would not be required instead to ...
Read more...


A federal district court in Virginia held that the Therapeutic Community Program (TCP) of the Virginia Department of Corrections violated the Establishment Clause of the First Amendment. The court also held, however, that prison officials were entitled to qualified immunity due to ...
Read more...


The Ninth Circuit U.S. Court of Appeals approved attorney fees/costs totaling $108,352 for litigation efforts in gaining injunctive relief under the Americans with Disabilities Act (ADA) and the Rehabilitation Act (RA) for California prisoners who had ...
Read more...


On March 9, 2003, the Washington Department of Corrections (DOC) and King County agreed to pay $3.1 million to the family of a woman who was brutally raped and murdered by a man on community supervision. The case is the ...
Read more...

In 2000, a group of prisoners, loved ones of prisoners, and attorneys filed a lawsuit in the U.S. District Court for the District of Columbia challenging the high cost of collect calls from private correctional facilities. The case is Wright, v. ...
Read more...


A federal district court for the District of Columbia has held that a parolee cannot be violated for activity alleged in a supplemental warrant filed after expiration of the original sentence. Larry Owens was convicted of violating District of Columbia (DC) ...
Read more...


The Ninth Circuit U.S. Court of Appeals ruled that the policy of the California Department of Corrections (CDC) of using race as a factor in initially housing cellmates did not offend the US Constitution's ...
Read more...


Federal district court Chief Judge Bar-bara B. Crabb, of the Northern District of Wisconsin, has decided that all pro se prisoner plaintiffs filing in this district must file and maintain separate § 1983 actions rather than filing as co-plaintiffs.

County May Be Liable for Private Prison's Customs and Policies


The New Mexico federal district court has held that a county could potentially be liable under 42 U.S.C. § 1983 for the customs and policies of a private prison corporation to whom it had contracted the operation ...
Read more...

Loaded on April 15, 2004 published in Prison Legal News April, 2004, page 42
Filed under: News, News in Brief. Location: United States of America.
Bolivia: Protesting bad conditions and long sentences, two prisoners at the Palmasola prison in the capital of La Paz were crucified on February 11, 2004. Prisoners Fredy Acosta and Walter Ortiz were nailed to crosses in the prison. The protest was filmed by local television crews where it was aired ...
Read more...

Prior To Reversal And Reconviction, California Prison Credits, Not Jail Credits, Apply


The U.S. Court of Appeals for the 8th circuit reversed and remanded a district court's dismissal of a prisoner's § 1983 complaint as untimely filed, holding that the prison mailbox rule applied to a prisoner's civil rights complaint. ...
Read more...