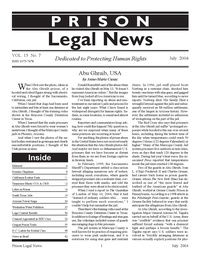 When I heard that dogs had been used to intimidate and bite at least one detainee at Abu Ghraib, I ...
Read more...

Loaded on July 15, 2004 by Paul Wright published in Prison Legal News July, 2004, page 6
Filed under: Commentary/Reviews, Eulogies, Editorials. Location: United States of America.
The month of June saw the media and
the Bush administration in a massive love fest over the death of Ronald Reagan. While it is generally considered bad form to speak poorly of the dead, like much of American domestic and foreign policy, there are winners and losers in all ...
Read more...

Thirty Three Years after Attica: Many more Blacks in prison, but not as guards

In September 1971, thousands of prisoners at Attica prison in rural New York State rebelled, taking control of D-yard. Sixty-three percent of the prisoners were Black or Latino, but at that time there were no Blacks and only one Latino as guards. Seventy percent ...
Read more...

Is It Criminal to Be a Muslim Civilian or Military Prison Chaplain?

It may not yet be criminal to be a Muslim prison chaplain, but they are certainly being singled out and subjected to a heightened level of scrutiny in the New York, federal and military prison systems. This point was driven home by the arrest on September ...
Read more...

Loaded on July 15, 2004 published in Prison Legal News July, 2004, page 9
Filed under: Court Access, Habeas Corpus, Military Prisons. Locations: Cuba, United States of America.
On November 10, 2003, the U.S Su-preme Court agreed to consider whether 16 detainees who are suspected of al-Qaeda or Taliban connections can challenge their detention in U.S. courts. The court will not decide whether the detention of the two Britons, two Australians, and twelve Kuwaitis is legal. Instead, it ...
Read more...

Loaded on July 15, 2004 by Gary Hunter published in Prison Legal News July, 2004, page 10
Filed under: Gender Discrimination -- Women, Prison Rebellion, Conditions of Confinement, Failure to Protect (General), Suicides. Location: Virginia.
Overwhelming depression drove Shawana West to hang herself when she learned that she was being placed in the Structured Living Unit (SLU) at Virginia's Fluvanna Correctional Center for Women. While the attempt was unsuccessful it did not fail to make a statement.

What kind of prison strikes this kind of ...
Read more...

The California Department of Corrections settled a prisoner civil rights complaint on November 12, 2003 by agreeing to accord approved kosher-observant Jewish prisoners a Kosher Diet Program (Program). The Program provides guidelines for foods used, for preparation methods, and for sanitation and safety. Additionally, it promulgates ...
Read more...

A major problem revealed by the audit is the retention of prison ...
Read more...

A jury has awarded $3.7 million in damages to an Oklahoma man who was falsely labeled a sexual predator after NewsOK.com, a Web site operated jointly by The Daily Oklahoman and Oklahoma City television station KWTV, listed his home ...
Read more...

Loaded on July 15, 2004 by Gary Hunter published in Prison Legal News July, 2004, page 14
Filed under: Out of State Transfers, Staff-Prisoner Assault, Private Prisons, Corrections Corporation of America/CoreCivic, Louisiana Correctional Services, Staff-Prisoner Harassment, Staff-Staff Harassment, Contractor Misconduct, Gender Discrimination -- Women, Totality of Conditions, Overcrowding, Preliminary Injunctions/TRO's, Employee Litigation. Locations: Michigan, Mississippi.
Court orders have forced Alabama to reduce the number of prisoners in its county jails and send half of its prison population to two other states. Until recently the Alabama Department of Corrections (DOC) had crammed 28,000 prisoners into cell-space designed to hold half that many.

BJS Looks at Probation, Parole in 2002

Loaded on July 15, 2004 published in Prison Legal News July, 2004, page 17
Filed under: Reviews, Crime/Demographics, Statistics/Trends, Parole, Probation. Location: United States of America.
By the end of 2002, more than 6.7 million adults were incarcerated, on probation, or parole. This amounts to 3.1% of all adults in the United States, or about 1 in every 32 U.S. adults under correctional supervision. This is according to an August 2003 report released by the Bureau ...
Read more...

Loaded on July 15, 2004 by Alex Coolman published in Prison Legal News July, 2004, page 18
Filed under: Staff-Prisoner Assault, Guard Misconduct, DNA Testing/Samples, Crime/Demographics, Criminal Prosecution. Location: Texas.
DNA evidence and a powerful will to fight helped former federal Texas prisoner Marilyn Shirley win a sexual assault conAviction and a $4 million civil decision against a guard who raped her while she was being held in the Carswell federal prison camp in Fort Worth, Texas.

A new national study by The Sen tencing Project released on May 11, 2004, finds that a record one of every eleven (9.4%) prisoners in the United States is now serving a life sentence. The number of "lifers" nationwide 127,000 has increased ...
Read more...

In July, 2002 PLN reported how Johnson desperately pleaded with her captors to continue her methadone medication. She offered to pay for treatment with her insurance; ...
Read more...

Loaded on July 15, 2004 published in Prison Legal News July, 2004, page 20
Filed under: Sex Offenders (Discrimination), Statistics/Trends, Prisoner Privileges, Rehabilitation/Recidivism. Location: United States of America.
Contradicting popular perceptions, a November 2003 report by the Bureau of Justice Statistics (BJS), a division of the U.S. Department of Justice, found that violent sex offenders released from prison are less likely than non-sex offenders to be rearrested on any charge, and that approximately 1 in 20 released sex ...
Read more...

On September 30, 2003, a state court of claims in Albany, New York, awarded state prisoner Ronald Zacchi $800,000 for the pain and suffering he experienced as a result of the prison medical staff's failure to diagnose and treat his ...
Read more...

Before signing on as director of the ADOC in June, 2003, Schriro weathered a troubled ...
Read more...

Cotulla, a south Texas town known or the illegal drug-sting convictions of a quarter of its African-American citizens, now has a new claim to infamy -- private prison scams. Cotulla, population 3,000, is the county seat of LaSalle County. In June, 2000, self-proclaimed and unlicensed prison consultant Rick Reyes talked the LaSalle County CommissionersRay Landrum, Albert Aguero, Domingo Martinez, Roberto Aldaco and former County Judge Jimmy P. Pattersoninto issuing a $2 million bond to renovate a 48-bed Cotulla jail before selling it to the private sector. The renovation contract went to Louisiana-based Emerald Correctional Management and Reyes pocketed 3%. Reyes then talked the commissioners into endorsing a plan to build a privately-run, 1,000-bed INS prison. Later, he proposed the issuing of $22 million in bonds for construction of a 500-bed, privately-run U.S. Marshals Service prison in Encinal.

To shield the county from liability, Reyes proposed creating a shell corporation, the LaSalle County Public Facilities Detention Corporation (LCPFDC), appointing the commissioners as directors and issuing the bonds. This allowed a poor county with a monthly budget of $180,000 to issue $22 million in bonds and spend the money it raised. The 10% - 12% interest rate bonds ...

A former Rikers Island deputy warden was sentenced to 1 to 3 years in prison after admitting that he, a former assistant deputy warden, and two former guards stole a rare Salvador Dali painting valued at $250,000 from its display case at Rikers Island jail in ...
Read more...

Wisconsin Contract for Faith-Based Program Does Not Violate First Amendment

A Wisconsin federal district court has found that a state Department of Corrections (WDOC) contract with a faith-based addiction recovery program does not violate the establishment clause of the First Amendment. This decision was later affirmed by ...
Read more...

Toxic and hazardous waste from Walla Walla State Penitentiary (WSP) continues today to pollute City of Walla Walla air and public water resources, notwithstanding fourteen years of administrative litigation stemming from citations and fines levied by the Washington State Department of Ecology (DOE) against the Department ...

The Supreme Court of Michigan (SCM) upheld a court's ordering a prisoner to have his pension benefits deposited in his prisoner account so that the state can seize a large portion of it to reimburse incarceration costs.

Loaded on July 15, 2004 published in Prison Legal News July, 2004, page 31
Filed under: Retaliation for Filing Grievances, Conditions of Confinement, Toxic Fumes/Chemicals, Administrative Exhaustion (PLRA), Complaints. Location: Arkansas.
The Eighth Circuit Court of Appeals held that a complaint that contains issues that were not administratively exhausted may be dismissed, but the plaintiff should be allowed to amend his complaint to include only those issues that were exhausted.

This civil rights action was filed by a prisoner at the ...
Read more...

The Oklahoma Supreme Court held that a state statute declaring all persons serving a felony sentence to be "civilly dead" does not preclude them from filing a civil action against a third party. The Court's decision overturns a contrary opinion ...
Read more...

The Ninth Circuit US Court of Appeals held that in prisoner 42 U.S.C. § 1983 civil rights lawsuits where both injunctive relief and damages are won (hybrid cases), attorney fee reimbursement for achieving the injunctive portion of the relief cannot be restricted under the 1996 Prison ...
Read more...

NLPA is a paralegal service that markets directly to criminal defendants. Its founder and president, Hugh Wesley ...
Read more...

Oregon Trial in Prison Did Not Violate Constitution

In two opinions issued the same day, the Oregon Court of Appeals held that holding criminal trials of prisoners in a courtroom inside a prison did not violate the Oregon or United States Constitutions.

Gary Cavan, a prisoner at the Snake River ...
Read more...

Interest on Legal Financial Obligations Not Dischargeable in Bankruptcy

The Washington Court of Appeals held that interest which accrues statutorily on legal financial obligations (LFOs) is not dischargeable in bankruptcy proceedings.

The California Court of Appeals upheld the California Department of Corrections (CDC) regulation permitting administrative labeling of state prisoners as sex offenders even where there had been only an earlier arrest or detention for such an ...
Read more...

Loaded on July 15, 2004 published in Prison Legal News July, 2004, page 37
Filed under: Retaliation, Retaliation for Filing Grievances, Cell Searches, Food, Appointment of Counsel, Complaints, Legal Mail. Location: New York.
The U.S. Court of Appeals for the Second Circuit vacated a district court's dismissal of a prisoner's § 1983 lawsuit which complained of prison officials who interfered with his legal mail and retaliated because he filed grievances.

Challenge to State Parole Revocations Must Be Brought Under § 2254

District of Columbia May Be Liable for Prisoner's Inadequate Medical Care

The U.S. Court of Appeals for the District of Columbia, reversing and remanding the district court, held that a D.C. prisoner incarcerated in a Virginia state prison stated a claim for relief when he alleged that the district had ...
Read more...

Florida's First District Court of Appeals has held that a prisoner who successfully challenges a public agency's failure to produce public records is entitled to recover all reasonable costs of the litigation. Florida prisoner Dale William Weeks ...
Read more...

Loaded on July 15, 2004 by Michael Rigby published in Prison Legal News July, 2004, page 40
Filed under: Guard Misconduct, Gang Policies, Conditions of Confinement, Failure to Protect (General), Damages, Premises Liability. Location: Texas.
The United States Fifth Circuit Court of Appeals has vacated and remanded the jury verdict in a Texas prisoner's failure-to-protect suit because the prisoner had not provided evidence supporting a jury finding of deliberate indifference against prison officials. The jury had awarded the prisoner $30 in compensatory damages and $70,000 ...
Read more...

The U.S. Court of Appeals for the Sixth Circuit reversed a district court's grant of summary judgment favoring certain prison guards who used excessive force and reversed the lower court's exclusion of the Use of Force ...
Read more...

Loaded on July 15, 2004 published in Prison Legal News July, 2004, page 42
Filed under: News, News in Brief. Location: United States of America.
California: On April 11, 2004, Matthew Jacquot, 28, a guard at the Orange County jail, was arrested in San Diego on felony vandalism, battery and being under the influence charges after he ran into a Seven Eleven store, broke doors, ripped out a sink and overturned display racks in a ...
Read more...

Loaded on July 15, 2004 published in Prison Legal News July, 2004, page 44
Filed under: Administrative Exhaustion (PLRA), Civil Procedure, Complaints. Location: Michigan.
The Sixth Circuit Court of Appeals held that a district court erred when it found that a Michigan prisoner failed to exhaust available administrative remedies and dismissed his § 1983 action on that basis.