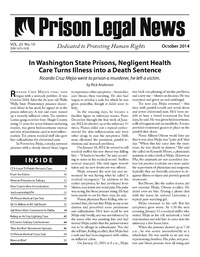 Ricardo Cruz Mejia went to prison a murderer, he left a victim.

On September 15, 2014, a Travis County District Court entered a final judgment that found Corrections Corporation of America (CCA), the nation’s largest for-profit prison company, is a “governmental body” for purposes of the Texas Public Information ...

This month’s cover story about the Washington Department of Corrections killing prisoner Ricardo Mejia through medical neglect is in many ways an old one. Over the past 24 years, PLN has run hundreds of articles about prisons and jails murdering prisoners through medical and ...

Women in Solitary Confinement: “The Isolation Degenerates Us into Madness“

Women in Solitary Confinement: “The Isolation Degenerates Us into Madness“

A mass prisoner hunger strike rocked California’s prison system last year, drawing international attention to the extensive use of solitary confinement in the United States. Increasingly, solitary is finding its way into the mainstream media and onto ...

On September 15 and 16, 2014, while Tennessee’s General Assembly was out of session, the Senate Judiciary Committee held hearings on criminal justice reform – the first time a legislative body in the state has comprehensively addressed that topic for ...

How the Courts View ACA Accreditation

How the Courts View ACA Accreditation

According to the ACA, “Accreditation is a system of verification that correctional agencies/facilities comply with ...

by Glenn Martin and Sasha Graham

For decades, advocates and scholars alike have publicly decried the crippling financial and human costs of mass incarceration. Today their calls for reform are amplified by an emerging bipartisan consensus that current incarceration trends are unsustainable, ineffective and increasingly harmful ...

On September 10, 2014 a federal judge entered a preliminary injunction against Lewis County, Washington in a lawsuit challenging a postcard-only mail policy at the county jail.

The lawsuit, filed by Prison Legal News in April 2014, alleged that ...

The 406th District Drug Court in Webb County, Texas has turned to a new approach for breaking the cycle of addiction related to heroin, opiate and alcohol abuse: The court formed a partnership with Irish pharmaceutical company Alkermes ...

A December 2014 trial date has been scheduled in a class-action federal lawsuit that could determine the future of health care for prisoners at the Fluvanna Correctional Center for Women (FCCW) in Troy, Virginia.

In a December 26, 2013 decision, the Eighth Circuit Court of Appeals reversed a district court’s grant of summary judgment, holding that a former pretrial detainee had presented sufficient evidence that he was subjected to retaliation for ...

In December 6, 2013, the Alaska Supreme Court held that barring an indigent prisoner from filing an appeal due to inability to pay the filing fee deprived him of his fundamental right of access to the courts.

California state prison officials could be forgiven for complaining that the federal courts spend a lot of time monitoring their activities, but the facts indicate that such attention is warranted. California’s prison system, already singled out by the ...

A New York City jury awarded $8.15 million to the estate of a prisoner who died after being denied access to medical care.

While incarcerated in 1996 at the Vernon C. Bain Correctional Center, part of ...

The Tenth Circuit Court of Appeals has held that a female prisoner’s “consensual” sex with two guards did not violate the Eighth Amendment.

Stacey Graham was housed in solitary confinement at a jail in Logan County, Oklahoma. ...

The Colorado Supreme Court held on January 13, 2014 that “allegations of negligence alone are not sufficient to overcome the statutory grant of immunity and the presumption of good faith afforded to law enforcement officers” under ...

On December 6, 2013, the California Court of Appeal, Third Appellate District, held that prisoners must exhaust administrative remedies before suing independent contractors employed by the prison system.

A former Wyoming Department of Corrections probation officer was placed on probation herself following her conviction on drug and theft charges.

Ruby Maddox, 36, was enrolled in a rehabilitation center to address her addiction to prescription medication as part of ...

On January 14, 2014, the Ninth Circuit Court of Appeals held that claims raised in an amended complaint satisfy administrative exhaustion requirements under the Prison Litigation Reform Act (PLRA) if they are exhausted before the amended complaint is ...

In an opinion filed May 21, 2013, the Fifth Circuit Court of Appeals held that changes to commutation laws and rules in Louisiana, which gave the pardons board the authority to deny a hearing on commutation and ...

The Second Circuit Court of Appeals held on December 20, 2013 that spraying a prisoner with a mixture of feces, vinegar and oil is not a de minimis injury

On January 16, 2014, the Ninth CircuitCourt of Appeals reversed a summary judgment order dismissing a prisoner’s claim related to 24-hour lighting in a segregation cell.

While incarcerated at the Airway Heights Corrections Center, Washington prisoner Neil Grenning was ...

In a well-crafted opinion delivered on August 8, 2013, the Seventh Circuit Court of Appeals held that a prisoner who was misled by a court clerk regarding the status of his habeas corpus petition should ...

On January 2014, the Seventh Circuit Court of Appeals upheld the dismissal of a challenge to a jail’s booking fee policy.

The Village of Woodridge, Illinois imposes a $30 booking fee on any person who is arrested and ...

The Colorado Supreme Court has held that a sentencing court may designate a person convicted of a sexual offense a Sexually Violent Predator (SVP) even if a risk assessment instrument (screening instrument) indicates that the person ...

Civil rights and immigration advocacy groups are watching closely to see the results of a change in federal policy governing the placement of immigrant detainees in solitary confinement, which was implemented one year following the release of a damning report on that ...

Prisoner advocacy groups are hailing recent successes in “Ban the Box” campaigns to remove questions related to criminal records from employment applications, and say they hope to expand the movement even further as momentum grows to help ex-offenders find jobs.

Seven members of Decarcerate PA, a grassroots coalition working to end mass incarceration in Pennsylvania, were arrested while protesting the construction of a new two-prison complex in that state. The protest was to highlight the $400 million cost to build ...

Creating a balance between adequate healthcare for prisoners at a reasonable and affordable cost for taxpayers is at the heart of a debate being argued in legislative offices and behind prison walls in California.

The federal receiver appointed to overhaul the state’s ...

The full Fifth Circuit Court of Appeals held in July 2012 that Congress did not have the power to enact criminal penalties for failing to register as a sex offender following an intrastate move, as ...

A former guard at Pennsylvania’s Erie County Prison and his supervisor, who is also his wife, were accepted into a special diversion program for first-time offenders after being charged in connection with payroll tampering and missing ammunition. Another guard was demoted following an investigation ...

Excessive enforcement of child support obligations is not only detrimental to incarcerated parents, according to advocates in Nebraska, but also risks increasing recidivism and hindering familial relationships.

Legal Aid of Nebraska, led by managing attorney Muirne Heaney, has attempted to ...

An upstate New York district attorney who lied when questioned during his re-election campaign about being an actor in pornographic movies during the 1970s will not quit, despite public calls for his resignation and at least one expert’s view ...

An anthropological team from the University of South Florida investigating the grounds of the now-closed Florida Industrial School for Boys (FISB), a juvenile detention facility in Marianna, has identified the remains of three youths buried in a ...

Alaska: On January 12, 2014, twenty-year-old detainee Jairus Nelson slipped under a garage door at the Dillingham jail and fled wearing nothing but his underwear. He ran into some nearby woods and later attempted to jump into several passing cars to evade officers. Unfortunately for Nelson, ...