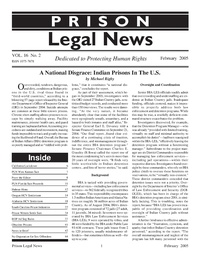 Loaded on Feb. 15, 2005 by Michael Rigby published in Prison Legal News February, 2005, page 1
Filed under: Conditions of Confinement, Overcrowding. Locations: Arizona, Washington.
Just when you thought it couldn't get any worse, it does. Supreme Court Justice William Brennan, Jr., resigned his seat, leaving President Bush to name an even more reactionary successor. Not only will the pro-choice Roe v. Wade ruling fall by the wayside, making life for women increasingly difficult, but ...
Read more...

On May 27, 2003, a state circuit court in Oldham, Kentucky, awarded prison guard Karen Lemarr a total of $34,000 for the lost wages, embarrassment, and emotional distress she suffered as a result of a coworker's sexual harassment.

Loaded on Feb. 15, 2005 by Paul Wright published in Prison Legal News February, 2005, page 8
Filed under: Commentary/Reviews, Editorials. Location: United States of America.
The index for the 2004 issues of PLN is now ready and available for shipping. PLN's indexes are a great stand alone research tool as well as the best tool to maximize the use of PLN as a research tool. Each index lists all PLN articles by issue and article ...
Read more...

Emotional and physical distress...restricted diets... "greeting beatings" ...high rates of mental illness...a reliance on warehousing instead of treatment. This is the troubling reality of disciplinary confinement in New York, according to a 54-page report released on October 22, 2003, by the New York Correctional Association (NYCA), a ...
Read more...

Emotional and physical distress...restricted diets... "greeting beatings" ...high rates of mental illness...a reliance on warehousing instead of treatment. This is the troubling reality of disciplinary confinement in New York, according to a 54-page report released on October 22, 2003, by the New York Correctional Association (NYCA), a ...
Read more...

Loaded on Feb. 15, 2005 by Kent A. Russell published in Prison Legal News February, 2005, page 12
Filed under: Sentencing, Habeas Corpus. Location: United States of America.
This column is intended to provide "habeas hints" to prisoners who are handling habeas corpus petitions as their own attorneys ("in pro per"). The focus of the column is post-conviction practice under the AEDPA, the 1996 law which now governs habeas corpus practice throughout the U.S.

On April 6, 2004, the Class Action suit against the Oregon Department of Corrections (ODOC) for failing to properly diagnose and treat the hepatitis C virus (HCV), was resolved by entry of a comprehensive settlement. ...
Read more...

Pursuant to the terms of the settlement resolving Oregon's Class Action HCV suit of Anstett v. State of Oregon , a Medical Review Panel (MRP) was appointed to evaluate and ...
Read more...

In a major milestone along the Southern Poverty Law Center's (SPLC) march towards gaining humane medical care in Alabama's prisons, a Settlement Agreement was signed in June, 2004 that commits the Alabama Department of Corrections (ADOC) ...
Read more...

A Boston federal jury has awarded $500,000 to a guard who was harassed at work by other jail employees after he reported misconduct by another guard.

Three Americans, led by ex-special forces soldier Jonathan Keith Idema, 48, of Fayetteville, North Carolina, have been convicted of running an unauthorized jail in Kabul and torturing Afghans they kidnapped in an attempt to extract information ...
Read more...

The prison industries program of the South Carolina Department of Corrections (SCDC) is improperly managed, likely displaces workers in the surrounding community, and creates an unfair advantage in the marketplace, according to a review performed by the Legislative Audit ...
Read more...

Doctors of Death and the Medicalization of State Murder

Prisoners often wonder if prison medical personnel really have their best interests at heart. But in the case of Sanjeeva Rao, a Georgia prison doctor, there is no doubt. He aims to see them dead.

The California State Supreme Court held that a sex offender satisfies his legal requirement to register with the police and tell them where he is living if he timely mails a notice to them by United States Mail.

Washington D.C. Superior Court Judge Judith E. Retchin is known for being tough on crime. She's so tough, in fact, that when a quadriplegic man came before her for possessing a small amount of marijuanahis first offenseshe ...
Read more...

Bronx Judge Alison E. Tuitt dismissed the suit on May 21, 2004four days into the trialbecause the prisoners had not shown ...
Read more...

Despite government reports claiming that guards committed no crimes in the alleged mass beating of prisoners at Bayside Prison in 1997, on June ...
Read more...

On January 9, 2004 the U.S. District Court for the Eastern District of Missouri found that Correctional Medical Services (CMS) and one of its employees, Gary Campbell, D.O., were liable for fourteen (14) months of pain and suffering endured by a Missouri state prisoner whose hip ...
Read more...

The Third Circuit Court of Appeals has upheld the denial of absolute immunity against prison guards who claimed they were following a court order when they failed to protect a known prison informant, even ...
Read more...

On December 15, 2003, a court of claims in Syracuse, New York, awarded $105,000 plus interest to a state prisoner who suffered a torn rotator cuff as the result of a construction accident.

Eight Connecticut prisoners who were sued by the state after the publication of their book, Couldn't Keep It To Myself: Testimonies from our Imprisoned Sisters , will get to keep most of their earnings, according to the terms of ...
Read more...

On June 3, 2002, the Los Angeles (L.A.) County, California Claims Board agreed to pay $800,000 to settle medical negligence and consortium loss claims by a prisoner and his wife for the ...
Read more...

The U.S. Court of Appeals for the 7th Circuit has interpreted the word "brought" in 42 U.S.C. § 1997e(a) to mean "when the complaint is tendered to the district clerk." The court then used that interpretation to affirm a district ...
Read more...

The Ninth Circuit U.S. Court of Appeals dealt with the following conundrum: does a prisoner who exhaustively fights purported violations of his First Amendment rights, by dint of his sheer effort to do so, thereby unwittingly ...
Read more...

The Oregon Court of Appeals held that a state prisoner's allegation of economic damages stemming from the purported improper release of his medical records and substandard medical care stated a claim sufficient to withstand a motion to dismiss.

The Eleventh Circuit court of Appeals has held that BOP administrative segregation policies create a liberty interest. The Court reversed a Georgia federal district court's order granting prison officials' motion to dismiss under Fed.R.Civ.P. 12(b)(6) for failure to state a claim upon which relief can be ...
Read more...

Loaded on Feb. 15, 2005 published in Prison Legal News February, 2005, page 38
Filed under: Sentencing, Parole. Location: Oregon.
The Ninth Circuit Court of Appeals held that the imposition of a longer sentence imposed on remand after a successful appeal of an order of the Oregon Parole Board (Board) was presumptively vindictive and the Board failed to rebut the presumption of vindictiveness.

A superior court in Suffolk County, Massachusetts, awarded $20,000 to a man who sustained a knuckle fracture when a cell door was allegedly opened without warning.

Plaintiff Gary Taylor, 47, was arrested for disorderly conduct and intoxication and imprisoned in the Boston ...
Read more...

A woman who claimed she was sexually assaulted by a Kleberg County, Texas, sheriff's deputy has settled her civil rights lawsuit against the county and the deputy for $50,000.

Iowa Must Give Kosher Meals to Civilly Committed Sex Offender

The United States District Court (S.D. Iowa) ordered that Kosher meals be provided without co-payment to an Orthodox Jewish prisoner who is committed to the Civil Commitment Unit for Sexual Offenders of the Iowa Department of ...
Read more...

"On the whole people tend to take prisons for granted," Angela Y. Davis.

But are we, as a society, willing to face the reality of what goes on inside? And are we willing to ...
Read more...

Today, nobody wants to keep paroled sex offenders around. Except the Los Angeles County district attorney, that is.

In an odd "man bites dog" scenario, the district attorney is trying to retain four foreign nationals who were paroled in California after serving ...
Read more...