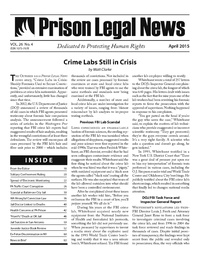 While crime labs across the country have been in the news for improper testing of forensic evidence in criminal cases, the problem with misplaced and improperly destroyed evidence is much more widespread.

Not just crime labs, but local ...

In 25 years of publishing Prison Legal News, we have reported a number of recurring themes where the only specifics that change are the names, dates and locations. But the broader issues – prison slavery, government corruption, guards raping prisoners, brutality, medical neglect, ...

The Tennessee Court of Appeals has held that a prisoner does not have a private right of action for being released early from jail, in a case in which a prisoner alleged he was freed ...

The Tenth Circuit Court of Appeals has upheld a prisoner’s more than three-decades-long stint in solitary confinement, sidestepping an opportunity to meaningfully address the appropriateness of such long-term isolation.

Thomas Silverstein, 62, has been held in solitary confinement ...

The Spread of Electronic Monitoring: No Quick Fix for Mass Incarceration

The Spread of Electronic Monitoring: No Quick Fix for Mass Incarceration

In a troubled criminal justice system desperately looking for alternatives to incarceration, electronic monitoring is trending. North Carolina has tripled the use of electronic monitors since 2011. California has placed 7,500 people on GPS ankle bracelets ...

The first black woman to be named president judge of Philadelphia’s Traffic Court has been sentenced to two years in federal prison in connection with a widespread ticket-fixing scandal that also led to the convictions or guilty pleas of six other judges. Another ...

he Maryland Court of Appeals held in June 2014 that circuit courts have the power to order the removal of sex offenders from the state’s registry, thereby impacting federal databases as well; the decision followed a prior ruling in which the Court found ...

On March 19, 2014, the Oregon Court of Appeals held that a pro se prisoner’s parole decision claims were not cognizable on appeal because he failed to raise those issues in his administrative review request.

The Oregon Board of Parole and ...

The confessed leader of a powerful gang inside the Baltimore City Detention Center was the government’s star witness at the trial of eight remaining defendants in a widespread racketeering, drug smuggling, bribery, extortion ...

Sixteen guards formerly employed atthe Roxbury Correctional Institution (RCI) near Hagerstown, Maryland have received sentences ranging from probation to five years in prison in connection with two assaults on a prisoner and conspiring to cover up those incidents. Fourteen of the ...

On July 23, 2014, the Oregon Court of Appeals vacated $36,000 in court-appointed attorney and indigent contribution fees, as there was no evidence the defendant had the ability to pay them.

On June 11, 2014, the Oregon Court of Appeals vacated $140 in “offense surcharges” imposed on crimes committed prior to the date the surcharges were authorized.

The suit was filed by the estate of Eva Luckey, 46, who died at a Rikers Island jail facility in ...

Darryl Holland, a Muslim prisoner at the Wende Correctional Facility in New York, was faced with a tough choice on November 20, 2003. Unable to provide a urine sample when ordered to do so by ...

Washington has joined the list of states that provide compensation for defendants who were wrongfully convicted and subsequently exonerated. Governor Jay Inslee signed the legislation on May 10, 2013, and it went into effect that ...

Oregon prison officials report that around 16 percent of the state’s 14,500 prisoners are “severely mentally ill.” In 2013 the union representing Oregon guards began suing some of those prisoners, in part to “hold them accountable” for physical altercations involving prison staff, ...

On August 3, 2012, the Second Circuit Court of Appeals held it is unconstitutional to force a pretrial detainee to perform labor other than that associated with personal housekeeping chores.

An Illinois doctor whose medical care – or lack thereof – was linked to the deaths of prisoners in multiple states has lost his license to practice medicine, has been fined at least $50,000 by ...

The International Academy of Compounding Pharmacists issued a statement to its membership that the organization’s Board of Directors had adopted a ...

Locked Down, Locked Out: Why Prison Doesn’t Work and How We Can Do Better, by Maya Schenwar

Locked Down, Locked Out: Why Prison Doesn’t Work and How We Can Do Better, by Maya Schenwar

Few books achieve that delicate balance between being equally empathetic and educational. In Locked Down, Locked Out: Why Prison Doesn’t ...

A preliminary report by two human rights organizations concluded that a toxic fly ash dump which surrounds State Correctional Institution (SCI) Fayette in Pennsylvania may be causing cancer and other serious health ailments to both prisoners and staff at the facility. While more study is needed to empirically prove the ...

The suits involved the treatment of prisoner Tonja Jackson at ACJ. Following her arrest in ...

Authorities in Washington State have said no charges will be filed in the death of a 33-year-old diabetic prisoner at the Spokane County Jail, even though his death was ruled a homicide after he was tased twice and placed in ...

An Oklahoma federal district court denied a request to modify a protective order to allow the release of video footage of the treatment of a prisoner prior to his death at the Tulsa County Jail (TCJ). The court ...

The Fifth Circuit Court of Appeals held on May 6, 2014 that federal employees responsible for overseeing immigration detainee contracts were entitled to qualified immunity even if they knew that female detainees were being transported by a single ...

The Eighth Circuit Court of Appeals has held a pre-trial detainee’s claim that a guard used excessive force could proceed where a jury could find the guard used a Taser on a non-aggressive detainee as corporal inducement to comply ...

On November 2012, the State of New York agreed to pay $2.7 million to settle a claim filed by a woman who was wrongfully convicted and imprisoned for over 13 years.

The Fourth Circuit Court of Appeals has affirmed a grant of judgment on the pleadings to two officers from North Carolina’s Charlotte-Mecklenburg Police Department in a civil rights case that alleged they had fabricated evidence.

$1.56 Million Settlement for Texas Jail Death Due to Drug Withdrawal

$1.56 Million Settlement for Texas Jail Death Due to Drug Withdrawal

One day before a trial was scheduled to begin in a Texas federal district court, Gregg County officials agreed to settle a case involving the death of a prisoner who was denied the prescription medications she ...

A 2013 study of jail deaths in four densely-populated Texas counties found that Bexar County leads the state in the number of prisoners who commit suicide. From 2009 through 2013, Bexar County, which includes San Antonio, reported 12 ...

By the time I was 7 years old I knew drugs were bad. I didn’t need a parent to sit me down on their knee and tell me this because Saturday morning cartoons were frequently interrupted by an advertisement brought to me by Partnership for a Drug-Free ...

On September 5, 2014, the Third Circuit Court of Appeals affirmed the denial of qualified immunity to supervisory prison officials for inadequate third-party medical care resulting in a prisoner’s suicide.

The Delaware Department of Corrections (DOC) operates the ...

A $345,000 settlement was reached between Wayne County, Michigan, the City of Detroit and the estate of a prisoner who committed suicide at the Wayne County Jail (WCJ).

The Ninth Circuit has held that a prison guard’s act of reading a prisoner’s legal mail – not merely inspecting or scanning it – constitutes a Sixth Amendment violation.

The Court of Appeals reversed a district court’s ...

he State of Wisconsin is releasing more violent sex offenders who were civilly committed following their prison sentences, in part, officials say, because the state’s treatment program is working and the offenders are less likely to recidivate than previously ...

Lawsuit Over Suicide of Oregon Prisoner Settles for $100,000

Lawsuit Over Suicide of Oregon Prisoner Settles for $100,000

The mother of an autistic Oregon prisoner who committed suicide shortly before his scheduled release accepted $100,000 to settle her suit against state prison officials.

Oregon Courts Must Give Notice before Amending Judgment

Oregon Courts Must Give Notice before Amending Judgment

On August 6, 2014, the Oregon Court of Appeals reversed a lower court’s second amended judgment that reinstated a former prisoner’s lifetime term of post-prison supervision (PPS). The lower court lacked authority to amend the judgment, because the parties ...

The Fifth Circuit Court of Appeals has reversed the dismissal of a challenge to the constitutionality of a city’s sex offender residency restrictions.

n July 17, 2014, the Seventh Circuit Court of Appeals reinstated a lawsuit filed by a mentally ill Wisconsin prisoner who claimed he was subjected to months of cruel and inhumane living conditions.

n May 1, 2014, the New Mexico Supreme Court held that satisfaction of the conditions of a deferred sentence fully restores a defendant’s civil rights by operation of law, without the need for a gubernatorial pardon.

On June 13, 2014, the Nebraska Supreme Court held that a prisoner did not state a cognizable access to court claim because he failed to show actual injury resulting from a one-hour daily law library limitation.

On April 11, 2014, the Third Circuit Court of Appeals held that a jail’s failure to train guards in conflict de-escalation and intervention techniques precluded summary judgment on a failure-to-train claim. The case subsequently ...

The slop at the Somerset County Jail in East Madison, Maine is quite popular, at least among the jail’s porcine residents.

Arizona: The Maricopa County Attorney’s Office announced on May 28, 2014 that it would not seek criminal charges against state prison guard Jesse Dorantes for the death of his K9 service dog, Ike, who was left in an unattended vehicle in the summer heat for seven ...