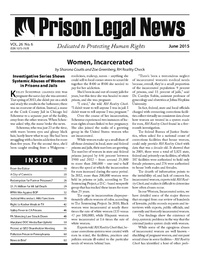 Keeley Schenwar learned she was pregnant the same day she was arrested. That spring of 2013, she didn’t pee on a stick and study the results in the ...

A Wisconsin federal jury awarded $1 million to the estate of a prisoner who died of a heart attack at the Racine County Jail (RCJ); the award came after the jury found jail officials were deliberately ...

The one area of American life where no one is calling for gender equality or parity is that of mass incarceration. Prisons are and remain a tool of social control aimed primarily at men, who make up 91% of all prisoners. The number of ...

A City of Convicts: The statistical sleight of hand that makes the U.S. crime rate seem lower than it really is

A City of Convicts: The statistical sleight of hand that makes the U.S. crime rate seem lower than it really is

Imagine an American city with 2.2 million people, making it the fourth largest in the nation behind New York, Los Angeles and Chicago. Now imagine that city is ...

$650,000 settlement was reached in a lawsuit filed by the estate of a prisoner who died at the Cumberland County Jail (CCJ) in New Jersey.

Santa Cruz County, California is seen by many as a model for enlightened jail policies. But in May 2014 the Santa Cruz County Grand Jury released a report on the unusual number of deaths in the county ...

Is Redemption Possible for Former Prisoners?

Is Redemption Possible for Former Prisoners?

The three women who were kidnapped and held hostage by Ariel Castro in a “house of horrors” in Cleveland, Ohio – tortured and sexually abused for roughly a decade – have been repeatedly praised for their strength and resilience since their rescue in May ...

Pennsylvania’s Lancaster County Commission has been forced to dip into its reserve funds to comply with an “unaccountable” arbitration award that resulted in a 7% annual pay increase for the county’s prison guards. ...

A $1.75 million settlement was reached in a lawsuit brought by the estate of a pre-trial detainee who died as a result of heroin withdrawal after being denied medical care.

In a depressing commentary on the availability of health care in the United States, a former federal prisoner got himself arrested so he could receive treatment for his leukemia. Although a judge declined to re-imprison the man, saying it would be inhumane, ...

Authorities in Israel concede there is little they can do to stop a growing practice among Palestinian prisoners: smuggling their sperm out of prison in order to impregnate their wives and father children.

In June 2013, Roger Perry pleaded no contest to two burglary charges in exchange for a total prison ...

Federal prisoner John Walker Lindh, better known as the “American Taliban,” who pleaded guilty to fighting for the Taliban in Afghanistan and carrying an explosive during the commission of a felony, has won a lawsuit against the warden ...

The Ninth Circuit Court of Appeals held on October 27, 2014 that the federal Bureau of Prisons (BOP) had improperly denied a prisoner early release eligibility, and remanded the case for a ...

Prisoner-on-staff assaults at the Toledo Correctional Institution (TOCI) in Ohio continued to rise in fiscal year 2014, but a recent report from a state inspection team indicates the facility has made improvements in other areas, and prisoner-on-prisoner assaults have declined significantly.

Oregon: No Presumed Prejudice for Violation of Attorney-Client Communication

Oregon: No Presumed Prejudice for Violation of Attorney-Client Communication

On August 20, 2014, the Oregon Court of Appeals upheld a lower court’s refusal to dismiss criminal charges against a defendant because a detective had read his legal mail.

Following a settlement agreement between Black Warrior Riverkeeper (Riverkeeper) and Alabama Utility Services (AUS), a judgment was entered in a lawsuit that alleged the sewage treatment plant at the William E. Donaldson Correctional Facility (DCF) had discharged ...

Following a bench trial, a Nebraska state court found prison officials were aware of threats to prisoner James M. Saylor but failed to take steps to protect him. Consequently, the court awarded damages and interest totaling ...

The Third Circuit Court of Appeals reversed a district court’s order dismissing a civil rights action that alleged the disclosure of a confidential informant’s status established a state-created danger in violation of his due process rights.

A former Iowa prisoner received a $71,000 settlement after being sexually harassed at her prison job in a case that established prisoners have civil rights protections with respect to employment under Iowa state law.

While incarcerated at the ...

In an October 24, 2014 corrected ruling, the Ninth Circuit Court of Appeals addressed a Nevada prison policy that denies prisoners with one good eye medical treatment for their other eye. The 2-1 decision reinstated a lawsuit that ...

On September 16, 2014, the Washington Court of Appeals held that information redacted from a prison investigative report should have been disclosed to a prisoner’s wife under the state’s Public Records Act (PRA). The appellate court ...

On October 10, 2014, an Oregon federal judge enjoined prison officials from automatically segregating death sentenced prisoners who have had their sentences vacated and are awaiting resentencing.

On December 21, 2012, in a lawsuit that still remains pending, the Fifth Circuit Court of Appeals held that a Jewish prisoner in Texas has the right to receive free kosher meals.

he Fourth Circuit Court of Appeals held on January 28, 2013 that refusal to evaluate a transgender prisoner for sex reassignment surgery states a valid Eighth Amendment claim. The case later settled after the plaintiff was released on ...

The Sixth Circuit Court of Appeals has held that a proposed class-action complaint filed on behalf of pretrial detainees at the Cleveland House of Correction, which alleged it was unreasonable for the jail to 1) ...

The State of California is taking steps to minimize the number of cases of coccidioidomycosis, a fungal infection commonly known as “valley fever,” at two prisons in the rural Central Valley area, including testing prisoners for the ...

Pennsylvania state lawmakers and former Pennsylvania Governor Tom Corbett both claimed they had good intentions when they enacted legislation that restricted prisoners’ free speech rights if their speech might upset crime victims. A federal judge disagreed, however, ...

Lincoln County, the City of North Platte and Great Plains Regional Medical Center agreed to settle a lawsuit filed by the sister of a Nebraska jail prisoner who committed suicide. As part of the settlement, the county agreed ...

The New York Court of Claims has awarded a former prisoner $360,000 in a lawsuit in which she claimed a prison guard repeatedly had sexual contact with her, some of it unwilling, and impregnated her.

Maryland Circuit Court found apetition filed by a group of prisoners who were denied interviews by a local newspaper was moot, but questioned the propriety of using victims’ rights as a reason for prison officials to veto the interviews.

In a March 30, 2015 ruling, the U.S. Supreme Court addressed a North Carolina law that requires certain sex offenders to wear a satellite-tracking device following their release from prison. Torrey Dale Grady had been ...

Two former guards at the Oklahoma State Penitentiary (OSP) received deferred sentences in connection with the death of an OSP prisoner who died due to smoke inhalation after setting fire to the mattress in his cell. ...

The Ninth Circuit Court of Ap­peals has held that an individual California prisoner’s medical care injunctive relief claims are not barred by Plata v. Brown, the class-action suit that seeks systemic reform of California’s prison ...

The Bureau of Prisons is investigating two prisoners who were discovered using Facebook to “broadcast live” from a federal facility in Atlanta, where they are serving time on drug and weapons charges. The probe was initiated following a November ...

For the second time in as many years, allegations of racism have been leveled against employees at the Maine State Prison. In the most recent incident, a former nurse at the facility filed suit in federal ...

On April 29, 2015, over 100 people joined a protest outside the GEO Group’s annual shareholder meeting at the Boca Resort and Club in Boca Raton, Florida. GEO, a private prison firm that trades on the New York Stock Exchange, bills ...

The Ninth Circuit Court of Appeals held that the attorney fee cap provision of the Prison Litigation Reform Act (PLRA) does not apply to fees incurred on appeal.

If his history is any indication, Wyoming fugitive Kenneth James Ward probably didn’t need a head start. But he got one when a private prison transport company let him get away and did not report the ...

The federal Bureau of Prisons (BOP) paid $600,000 to settle a lawsuit alleging officials at USP Coleman Low caused a prisoner to suffer permanent injuries due to their negligent provision of medical care.

The Civil Rights Division of the U.S. Department of Justice (DOJ) has reached an agreement to settle a civil complaint that alleged the rights of mentally ill prisoners at the Robertson County Detention Facility (RCDF) in Springfield, Tennessee were being ...

In September 24, 2014, the Second Circuit Court of Appeals held that a district court had improperly dismissed a New York prisoner’s lawsuit for failure to prosecute, without weighing the required factors.

Recently, a group of human rights researchers, responding to letters from prisoners at SCI Fayette, found a slew of environmental dangers and threats to the lives, health and well-being of hundreds of prisoners, guards and other staff members at the prison in Western ...

The Pennsylvania Supreme Court has accepted the voluntary disbarment of one of the high court’s former jurists who was convicted in 2013 on corruption charges. Former Justice Joan Orie Melvin, 58, was also ordered to come ...

Overcrowding at Nevada’s Elko County jail is expected to ease with the scheduled completion of an addition to the facility, while the jail continues to work on correcting deficiencies reported in a Nevada Department of Health ...

Arizona: Sergio Aguilar, 51, incarcerated at the Towers Jail in Phoenix, died on November 4, 2014 following a fight among several prisoners that reportedly started over a commissary-related issue. The Maricopa County Sheriff’s Office said the incident was a “racially divided brawl” and Aguilar had been ...