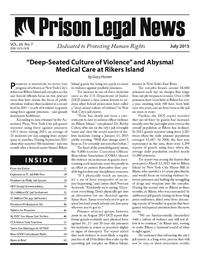 Pressure is mounting to speed the progress of reforms at New York City’s infamous Rikers Island jail complex, as city and federal officials focus on two primary areas that have drawn the focus of public attention: violence that escalated to a record level in 2014 – much of it related to guards using force against prisoners – and grossly inadequate healthcare.

According to data obtained by the Associated Press, New York City jail guards reported using force against prisoners 4,074 times during 2014, an average of 11 incidents per day, ranging from pepper spray to punches. During September 2014 alone they reported 406 incidents – just one month after a federal report blasted Rikers Island guards for being too quick to resort to violence against youthful prisoners.

The increase in use-of-force incidents came as the U.S. Department of Justice (DOJ) joined a class-action lawsuit to address what federal prosecutors have called a “deep-seated culture of violence” in New York City’s jail system.

“There has clearly not been a commitment to date to address officer violence on Rikers Island,” complained Dr. Bobby Cohen, who sits on the ...

Adolescent Prisoners at Rikers Island No Longer Placed in Solitary

Adolescent Prisoners at Rikers Island No Longer Placed in Solitary

On January 13, 2015, the New York City Board of Correction (BOC) voted unanimously to end solitary confinement for prisoners 21 years old and under in the city’s jail system.

Buckling under pressure from the U.S. Department of Justice (DOJ), ...

The Ohio Department of Rehabilitation and Correction has agreed to pay prisoner Ivan Lacking $2,000 for injuries he received in a unit stairwell while on the way to the dining hall.

Over the past 25 years of publishing PLN we have run numerous stories about the Rikers Island jail complex in New York City, generally dealing with guard brutality and medical neglect. Despite several major class-action suits and hundreds if not thousands of other lawsuits, ...

As negotiations continued between the U.S. Department of Justice (DOJ) and Escambia County, Florida officials over correcting major deficiencies at the county’s Central Booking and Detention Facility, the jail was rocked by an ...

Behind Bars and in Danger?

Behind Bars and in Danger?

If Mike Brady had died in a ditch somewhere, his brother would have understood. If he’d overdosed on a North Philly stoop? Sure, that would have been tragic – but unsurprising, given Brady’s longtime struggle with drug addiction.

All the environmentally-conscious “green” certifications in the world can’t cover up the steady flow of atrocities associated with for-profit prisons, but that’s not going to stop them from trying.

An eight-year-old lawsuit alleging illegal overdetention and strip searches of detainees at the District of Columbia Jail concluded with a $6.2 million settlement. The class-action suit had accused the jail of wrongfully strip-searching prisoners who should ...

On June 17, 2015, U.S. Rep. Raúl Grijalva sent a letter to U.S. Attorney General Loretta Lynch, requesting an investigation into recent deaths at the Eloy Detention Center in Arizona. The facility, which houses detainees ...

In a decision with serious implications for criminal defense attorneys as well as civil litigants, the U.S. Supreme Court held on December 9, 2014 that a juror’s allegedly untruthful responses during voir dire ...

$400,000 Settlement in Suit Over Minnesota Prisoner’s Death Due to Medical Neglect

$400,000 Settlement in Suit Over Minnesota Prisoner’s Death Due to Medical Neglect

On May 1, 2013, the Minnesota Department of Corrections (DOC) agreed to pay a $400,000 settlement in a federal lawsuit after a prisoner suffered multiple seizures and died, having received virtually no medical care.

When Eusemia Rodriguez, 33, was admitted to the jail in Santa Fe County, New Mexico on July 3, 2012 on a domestic battery charge, she advised employees that she was a drug and alcohol addict who was at risk ...

On September 8, 2014, a California federal district court awarded $7,826.60 in fees and costs to the attorneys and certified law students who successfully defended against a motion to terminate a decades-old consent decree.

Sixty prisoners died in San Diego County, California’s jail system over the past five years, but the facts surrounding those deaths sometimes remained a mystery as prisoners’ families waited for years and still received few answers. In some cases, the ...

An Illinois federal jury awarded $1 million to a prisoner’s estate after finding the city of Chicago had a policy and practice of systematically depriving detainees in police lockups of needed medical attention and/or medication.

Officials in Bergen County, New Jersey are seeking bids on a new jail phone contract that will include an increase in the “commission” kickback the county receives from calls made by prisoners, which will go from ...

While declining to rule on the constitutionality of a state law authorizing privatized probation services, on November 24, 2014 the Georgia Supreme Court issued a 41-page decision that alters the administration of that statute.

On July 2, 2014, private prison corporation GEO Group added yet another former government official to its inner circle. GEO Group’s management voted unanimously to expand their board of directors to seven seats, adding Julie ...

The Pennsylvania DOC is joining a small number of state prison systems that allow prisoners to purchase specially-modified tablet computers, and that number could grow as more and more corrections officials ...

In August 2012, two Texas jailers and a deputy sheriff were fired for failing to summon medical assistance for an injured 72-year-old prisoner at the Harris County jail in Houston, and for failing to report a guard who punched the ...

The State of Alabama has agreed to implement reforms designed to protect prisoners at the Julia Tutwiler Prison for Women from what investigators with the U.S. Department of Justice (DOJ) described as a “toxic, ...

Richland County, South Carolina has agreed to pay $750,000 to a pretrial detainee who was seriously injured after being beaten by a guard. The jail’s private medical contractor, Correct Care Solutions (CCS), paid $600,000 ...

It’s a regular routine for Texas state prisoners – commissaries running out of hygiene supplies and other items as purchasing contracts are renewed.

The contracts for Texas prison commissaries expire at the end of August, when ...

In June 2013, the federal district court overseeing California’s treatment of prisoners with disabilities granted a motion for an order to enforce its prior orders, concluding that clear and convincing evidence showed that ...

The Ninth Circuit Court of Appeals has dismissed a prisoner’s civil rights appeal after finding it was rendered moot by the parties’ post-trial settlement agreement.

Nevada prisoner Christopher A. Jones was subjected to disciplinary action after guards at ...

Corrections Corporation of America (CCA), the nation’s largest for-profit prison company, held its annual shareholder meeting in Nashville, Tennessee on May 14, 2015. It was likely the first time that the words “vagina,” “penises” and “menses” ...

Peer-Review Reports Must be Disclosed in Philadelphia Jail Conditions Suit

Peer-Review Reports Must be Disclosed in Philadelphia Jail Conditions Suit

A Pennsylvania federal district court held on November 4, 2014 that medical care contractor Corizon Health has to produce mortality and sentinel event reviews in a class-action suit filed by prisoners in the Philadelphia Prison System (PPS) ...

In internal investigation of a home confinement program in Orange County, Florida revealed widespread problems, including the failure of staff to report violations that could have led to the re-incarceration of a program participant accused of killing one person and wounding two ...

Of America’s 48 worst charities, ten – or just over 20% – are affiliated with law enforcement groups, according to a joint investigation by the Tampa Bay Times and the Center for Investigative Reporting (CIR).

The Ninth Circuit Court of Appeals held on August 25, 2014, in a 2-1 decision, that a “brutal” warrantless body cavity search violated the Fourth Amendment.

In September 2006, Mark Tyrell Fowlkes was arrested on federal drug charges in ...

Corrections officials in Arizona have changed a policy related to prisoner marriages to allow same-sex unions, now that such marriages are legal in the state. However, prisoners are still not permitted to marry one another, either as traditional or ...

Some knickers are in a bunch over revelations that prisoners in Great Britain are working as telemarketers for an insurance company.

Prisoners at two facilities – HMP Oakwood and the Drake Hall women’s jail in Staffordshire – were ...

In the aftermath of a 2013 ruling by the California Court of Appeal that found a book containing sexually explicit content was not obscene and must be returned to the prisoner who ordered it, and following a hunger ...

lForida’s First District Court of Appeals held on January 2, 2015 that it was error for a trial court to dismiss as moot a prisoner’s mandamus petition without ruling on a pending motion ...

Mchael B. Kingsley, a pre-trial detainee in a Wisconsin county jail, filed a § 1983 federal civil rights action alleging that deputies had used excessive force and inflicted serious injuries when they removed him from his ...

The First Circuit Court of Appeals declined to rule on a question of whether qualified immunity is categorically unavailable to private medical contractors because disputed issues of material fact remained in the case.

Before the appellate court was ...

Alabama: U.S. Marshals used a tip line to locate and arrest the third and final prisoner who escaped from the Choctaw County Jail on December 14, 2014. Demarcus Woodard, Gemayel Culbert and Justin Terrell Gordon lured a guard into their cell and overpowered him before absconding. ...