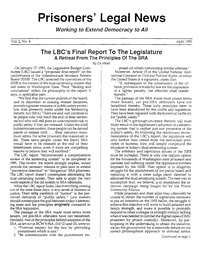 The LBC's Final Report to the Legislature: A Retreat From The Principles of the SRA

On January 17, 1991, the Legislative Budget Committee (LBC) issued a "proposed final report" on the performance of the Indeterminate Sentence Review Board (ISRB). The LBC assessed the operations of the ISRB in the context of the dual sentencing system that still exists in Washington State. Their ...
Read more...

One thing every old convict asks himself at one time or another is: Is prison change better than the old way of doing time?

Backing up to the days of slave labor when a simple complaint could buy you 8-28 days in the hole, I have ...
Read more...

A House committee has issued a report alleging that the Bureau of Justice Assistance (BJA), which manages the $492-million drug enforcement grants program, discontinued funding of drug treatment in prisons and jails, and then tried to mislead the committee into thinking that ...
Read more...

Did DOC Lie on Computer Issue?

Back in the late '70s I was involved in an armed escape attempt from the state prison at Walla Walla. It was my first time in a state prison, and the experience was to teach me a lot about the low ...
Read more...

While critics of the Bush Administration have been arguing that the war on drugs has become a "nonwar" since Operation Desert Storm began, the U.S. Justice Department says the fight to free the nation of the scourge of narcotics remains a top Administration priority.

Welcome to another issue of PLN. Next month will mark one full year of publishing PLN. This is our twelfth issue. We started out planning to make it a four to six issue project to see what kind of a response we got. We started out with ...
Read more...

Loaded on April 15, 1991 published in Prison Legal News April, 1991, page 5
Filed under: Sentencing, Three Strikes. Location: Washington.
For those who have been following the habitual criminal issue, there is some news. The lead case, In Re Echman, which is pending in the State Supreme Court, challenges the way the Board conducted 1457 reviews. It is argued that the Board was directed by the Legislature to review all ...
Read more...

John Perroti and his partner, Linda Leisure, have been on a hunger strike since February 14, 1991. Perroti has been held on a one-man isolation tier supposedly only until MANCI's AC unit opened. His visits have been restricted to one hour noncontact visit in full restraints ...
Read more...

President Bush, who expressed disappointment with the limited crime control bill approved by Congress last year, has signaled that he intends to keep anti-crime initiatives on the national agenda this year, beginning with a national conference that was held last month.

Beating in the MANCI Control Unit

Leaders of the Pennsylvania House and Senate Judiciary Committees said they will introduce legislation this year to strip the Parole Board of most of its authority as a way to reduce prison overcrowding. The lawmakers said the number of state inmates would decline ...
Read more...

&quot;.100 Hearings&quot; Opinions Of An Attorney

As an attorney, I concur with the person who believed the Board was "maxing out" the majority of persons to whom they have allowed .100 hearings, or, at the very least, given them extra time which is far beyond discretion, ...
Read more...

Loaded on April 15, 1991 published in Prison Legal News April, 1991, page 6
Filed under: Sentencing, Parole. Location: Washington.
Some of you with 1st degree murder convictions that occurred prior to July 1, 1984, have been appearing before the Board for so-called 1457 minimum term settings. Information received by this writer indicates that the Board is handing out very long terms in the vast majority of the cases, and ...
Read more...

[Editors note: this article is translated and based on a letter from Jean Marc to one of PLN's editors.] FRESNES, FRANCE

The latest struggle here in France is a rolling hunger strike, one of us will not eat for a week, then another won't eat and ...
Read more...

Oppression and Resistance at Canada's Prison for Women

KINGSTON, ONTARIO - On February 12, 1991, Lorna Jones, a native prisoner, was found hanging in her cell. Her's was the fifth suicide by a native prisoner at the Prison for Women (P4W) in the last 18 months. Lorna had been serving ...
Read more...

You are as irrelevant

as I am to yours.

I have no power over you

and I seek none.

But, you are unhappy

with the big people

to pull the strings

Loaded on April 15, 1991 published in Prison Legal News April, 1991, page 8
Filed under: Commentary/Reviews, Reviews. Location: United States of America.
RESISTANCE - Documents and analysis of the illegal front. Is an irregular tabloid that has news and analysis of militant autonomist, anti-imperialist, national liberation, and anti-nuclear struggle in the advanced capitalist countries. The latest issue has articles about native struggle in Canada, a discussion paper on patriarchy from the Revolutionary ...
Read more...

Loaded on April 15, 1991 by F L published in Prison Legal News April, 1991, page 9
Filed under: Gender Discrimination -- Women, Organizing. Location: Illinois.
Prisoner's Legal News is an excellent monthly magazine that I sincerely hope is generating interest and financial support, to which I will soon be adding.

The major concern among most women in prison is the welfare of their children, many of whom were declared to be wards of the state ...
Read more...

Loaded on April 15, 1991 published in Prison Legal News April, 1991, page 9
Filed under: Discrimination, Racial Discrimination. Location: United States of America.
Many of our inmates are Mexican and/or Central American citizens. They are called up to legal mail line and receive registered letters from their home countries. These letters usually contain a few well worn, soiled American dollars. The institution counts them and has the inmate sign for postage to return ...
Read more...

Loaded on April 15, 1991 by F D published in Prison Legal News April, 1991, page 9
Filed under: Commentary/Reviews. Location: Washington.
I am a 25-year-old inmate serving time in Washington State Correction Center at Shelton. Since my incarceration here at Shelton I have watched expensive reconstruction projects occurring rapidly, such as Birch and Spruce Halls turned into more R-units, more fencing and razor wire, as well as stadium lights that are ...
Read more...